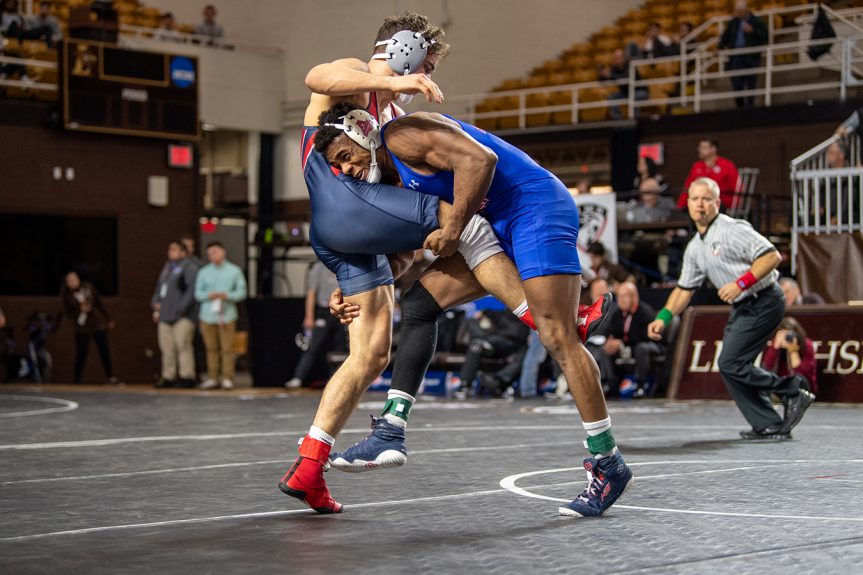 WASHINGTON – American University student-athlete Elijah Murphy recently saw his face on television being honored during the ESPY Awards and was left in awe.

Together with Howard University student-athlete Niah Woods, Murphy was one of seven recipients of the 2020 Billie Jean King Youth Leadership Award. The 157-pound wrestler said he did not know he was nominated until days before the show.

The moment his face flashed on the screen during the broadcast was “surreal,” but confirmed to Murphy that his work mentoring middle-school-aged children in the Washington, D.C. region meant that he was “doing something right.”

“[To] be in the same conversation as all those professional athletes and having people like Billie Jean King say your name and acknowledging the work that you’re putting in and saying that you’re an inspiration and that you give her confidence for the future alone, it really means a lot,” Murphy said.

The Northwestern High School alum was awarded for his work for The Grassroot Project, mentoring middle schoolers in Washington, D.C. in an array of topics, and will direct a grant to the organization to continue its outreach programs in the city.

The Grassroot Project partners with more than 50 D.C. public and charter schools to provide health education programs taught by NCAA student-athletes, which they call “non-traditional health educators.” The program chooses to work with student-athletes to build trusting relationships with the young students to discuss sensitive issues related to their health.

Topics include sexual, mental, and physical health, as well as nutrition. To break the ice, the “educators” are trained to start the conversation with interactive games before splitting into small group sessions.

While several of college friends were mentors, Murphy was unsure that his introverted personality would fit with the program’s objectives. His reservations on public speaking and being “goofy” around middle school students made him feel nervous and apprehensive initially.

“At the beginning, I didn’t see myself doing that because of the person I was, but I saw it as an opportunity for personal growth and also giving back and doing great community work,” Murphy said.

The Eagles athlete recalled the first few visits at a Washington, D.C. middle school where he was caught off-guard by their advanced knowledge levels on sexual health. Students already knew about antiretroviral drugs, the types of other medications needed to manage HIV, and the exchange of different bodily fluids can spread sexually transmitted diseases.

The District of Columbia Department of Health reported 12,322 D.C. residents, or 1.8% of the population, were living with HIV in late 2019. The humbling experience of not having answers, taught to mentors during training, moved Murphy to be a better listener and speak in a conversational tone.

“I talk to them as equals,” Murphy said. “Because I know that when I was that age, I didn’t like people talking down to me as if they were better than me or just because they’re were older than me, so they’re my equals.”

Along with his status as an American University student-athlete and a native of the area, students began to gravitate towards him.

“Being a Black student-athlete from Prince George’s County, you can go into one of the middle schools and impart to someone just basically being someone who looks like them and who is doing something that they want to do, which could potentially be a D-I athlete, or it could be to go to a college,” Murphy said.

Admittedly, having students trust him to share their lives with him can take its toll on Murphy. The discipline instilled in him as a wrestler pushes him to strive for perfection and shoulder their experiences with multiple conversations.

His journey began at Northwestern, where he went 85-30 during his career, leading him to American. The sport’s push for excellence helped him “walk the walk” in becoming a better mentor for his students.

Murphy recently received his bachelor’s degree in psychology and has begun working towards his master’s degree. He plans to return to the mat for the 2020-21 season as a redshirt senior wrestler while completing the course work for his advanced degree a year early.

Murphy also plans to continue his work with The Grassroot Project as a paid internship program, while helping the organization revisit the mental health curriculum. He hopes to add listening sessions that tackle topics like systematic racism stemming from the protests fueled by the death of George Floyd.

Had the pandemic not occurred, Murphy believes students would have used the program to discuss police brutality and its effects on mental health in their community. The desire to share one’s experiences inspired him to join together with University of Maryland wrestler and Fort Washington native Jahi Jones in a two-part Instagram discussion on race in America.

His overall goal is to spread the importance of mental health in the African American community, and Murphy believes it starts with his work on a mentor.

When asked about his thoughts of being looked up to, Murphy said his position as a role model goes beyond than his personal exploits as an athlete and relishes the opportunity to continue that path going forward.

“It’s being able to help them in any way, shape, or form, and that’s extremely important to me, as a psychology major, as a human being, and as a Black man,” Murphy said. “That’s extremely valuable to me to help when help is needed or make any type of impact, and I can.”