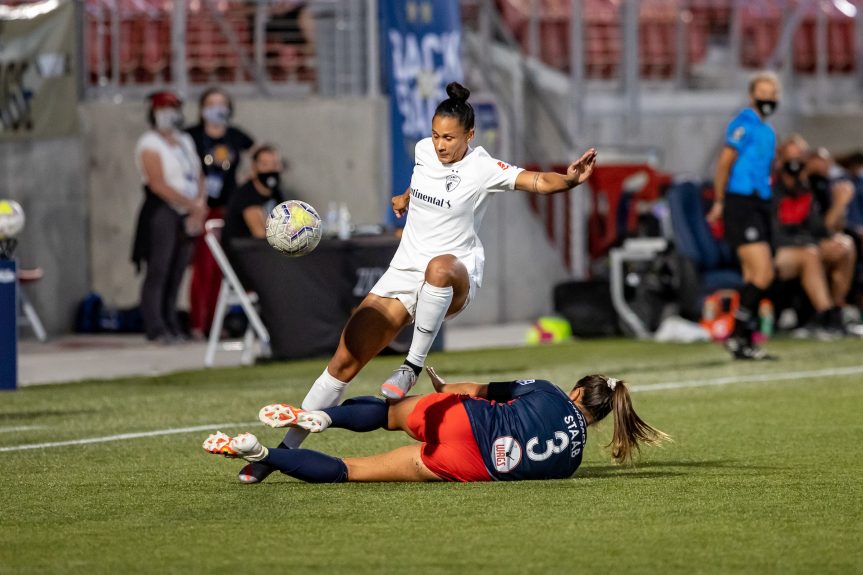 WASHINGTON – Striker Lynn Williams scored two second half goals to lead the North Carolina Courage past the Washington Spirit, 2-0, in their second match of the 2020 NWSL Challenge Cup on Wednesday in Utah.

Williams, the Courage’s leading goal scorer last year, found the back of the net five minutes after halftime when she collected the ball down the right sideline, driving past a diving Sam Stabb and ran towards the penalty area unmarked.

The 27-year-old capped off her long sprint toward the net with a left-footed shot past Arbury Bledsoe to give the reigning NWSL champions a one-goal advantage.

Less than 12 minutes later, Courage midfielder Debhina launched a cross from the right flank into the penalty area to find Williams. The striker stuck her right foot out, connecting with the ball and drove it to the far post for her second goal. Williams leads the Challenge Cup with three goals in two matches.

“I thought the first half it was relatively competitive,” Washington Head Coach Richie Burke said. “But we ran into a bit of a buzzsaw in the second half where they offloaded their bench with international players and came after us with a buzzsaw.”

The Spirit, who defeated the Chicago Red Stars 2-1 in their opening match of the tournament, made multiple lineup changes before kickoff to combat North Carolina’s potent offense while testing its depth.

Debinha quickly responded with a right-footed shot of her own from the left side of the penalty area towards the Spirit goal. The ball crashed off the far side goalpost as both teams were unable to break the deadlock in the first half.

Washington was unable to replicate their offensive success from the Chicago match, finishing the game with only five shots and only one, Sullivan’s early strike, going on target.

Defender Paige Nielsen credits North Carolina’s ability to cancel out their gameplan of aggressive possession and attack the Spirit backline as they experienced fatigue as the match wore on.

With the result, Washington (1-1-0, 3 points) drops to second place in the eight-team tournament. Coming up, the Spirit will face the Portland Thorns on Sunday at 10 p.m.