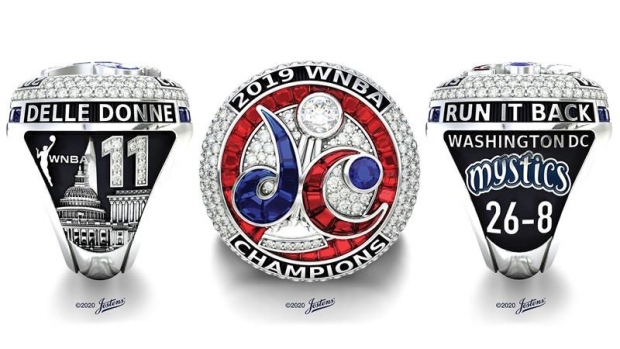 WASHINGTON – As the Women’s National Basketball Association (WNBA) anticipates a late-July return to action, the defending champion Washington Mystics came together on Sunday to honor their historic 2019 season.

After an eight-month hiatus from basketball, the Mystics received their rings at the private ceremony at Salamander Resort & Spa in Middleburg, Virginia.

“Our season was historic, extending beyond the records they broke along their journey,” said Mystics managing partner Sheila C. Johnson. “This ring represents the leadership of Coach Mike Thibault, the resilience of our team – who kept their promise to #RunItBack, on the court, and in our community – and a season that Mystics fans will always cherish.”

The rings, which were crafted by Jostens, consist of 120 diamonds, 35 rubies and 23 sapphires in 10-karat white gold. The Mystics DC logo and the WNBA Championship trophy sit on top with a half dozen custom-cut sapphires and six custom-cut rubies to represent the 12-player roster and a single round sapphire to symbolize head coach, Mike Thibault.

The left side features the players’ last names and jersey number, while the right side spells out “RUN IT BACK” and the team’s 26-8 record from the 2019 season. The interior of the ring includes playoff scores and logos of opponents.

Staying unique to the nation’s capital, the ring also features District landmarks such as the Washington Monument, Capitol Building and the Lincoln Memorial, as well as symbols to represent the team’s home location in Ward 8.

“You’d think it would be loud, but we were all kind of quiet because we were all just taking in the moment and just studying the rings,” said Mystics forward Elena Delle Donne. “They’re absolutely beautiful.”

Choosing to receive the rings at a private event, the Mystics are not the only DMV team celebrating a championship season. The Washington Nationals, who initially planned on a virtual ring ceremony in May, instead chose to postpone the event for a later, more physical reunion.

In the Mystics case, collectibles are available for purchase on the Josten website with prices ranging from $29 for a Championship Key Ring to nearly $9,000 for a Limited Edition Ring.

Winning their first championship in their 22-year history, the Mystics sparked a high-octane offense, leading the WNBA with 89.3 points per game and 21.9 assists per game. Delle Donne won her second career MVP award during the 2019 season, averaging 19.5 points and 8.3 rebounds per contest. Four other Mystics also averaged double figures for the season.

As the Mystics aim to run it back in 2020, they will be hurdling several losses to the roster, including Natasha Cloud and LaToya Sanders, who have opted out of playing this season. Additionally, Kristi Toliver and Shatori Walker-Kimbrough have moved on to the Los Angeles Sparks and Phoenix Mercury, respectively.

In the adjusted season, which has been shortened from 36 to 22 games, the WNBA teams will spend the entirety of the 2020 season at IMG Academy in Bradenton, Florida.