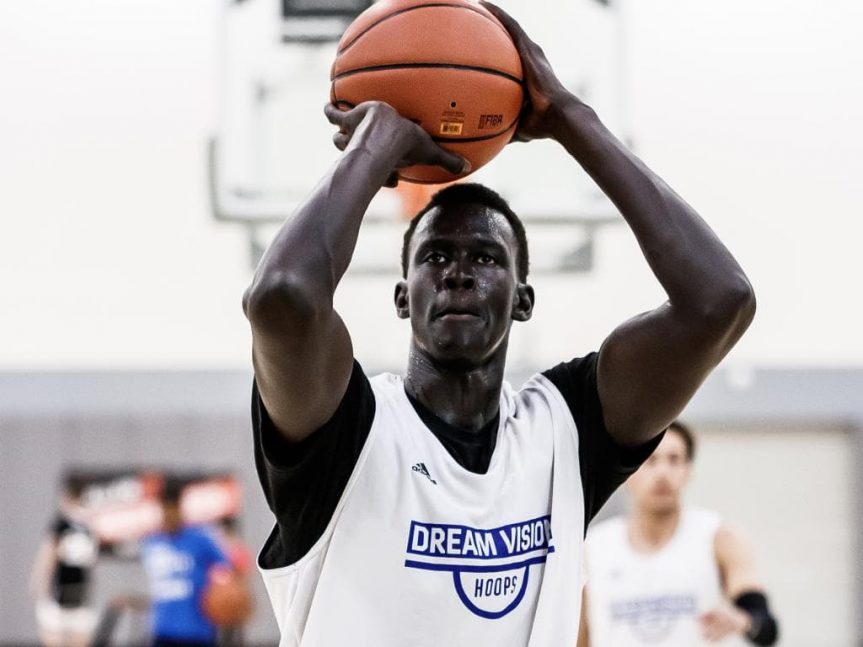 WASHINGTON – A five-star basketball player had never committed to a historically black college or university (HBCU). With one tweet, that all changed.

On Thursday, high school prospect Makur Maker tweeted his final four options in his college decision, with Howard University among the quartet, which also features UCLA, Kentucky and Memphis.

Less than 12 hours after listing his options, Maker had made up his mind, committing to play for the Bison.

Born in Nairobi, Kenya, to Sudanese parents, and raised in Perth, Australia, Makur moved to the United States before his freshman year of high school.

At 6-foot-11, Maker, who is the cousin of Detroit Pistons center Thon Maker, is ranked by 247 Sports as the 18th best high school player in his recruiting class and 16th by ESPN 100.

Maker’s journey to choosing Howard has been one filled with twists and turns.

Maker made a college visit to Howard in October for during the university’s homecoming but tweeted in November that he would take his talents back to Australia to play in the National Basketball League (NBL).

Later that month, though, he pulled back on the commitment to play overseas.

In February, Maker had looked to possibly join his cousin at the NBA level after winning a petition with the league to gain eligibility for the 2020 Draft. He had missed a season of basketball because of an injury. Thus he had spent five years in high school.

By the end of April, Maker ranked 75th in ESPN’s Top 100 for his draft class and given the limitation in recent months since the outbreak of COVID-19, Maker has missed out on opportunities to impress NBA scouts and raise his draft stock, leading college basketball to be his best option.

As Maker made his decision to join the HBCU, Howard clearly stuck out among his four options.

Kentucky and UCLA have historic basketball programs having each won 11 national championships, while Memphis is growing into a viable threat under head coach Penny Hardaway.

On the other hand, Howard is coming off a 4-29 record, where they won just one conference game under first-year head coach Kenneth Blakeney.

Despite their struggles, it is important to note that the team had lost more than 40 points per game worth of scoring to the transfer portal, as three players took their talents elsewhere following the 2018-19 season.

In attempts to bolster the program, Maker was one of the only star players to express interest in Howard. During the same period that Maker made his visit to Howard in October, five-star prospect Josh Christopher also toured the campus before ultimately committing to play at Arizona State University.

Although Christopher chose a Power Five program, the narrative around HBCU athletics has changed dramatically in recent months, even prior to Maker’s decision.

While Robert Covington and Kyle O’Quinn are the only active NBA players who attended HBCUs, the programs were long, the only option for many college athletes in the South. As schools desegregated, HBCUs eventually got pushed to the back burner as top athletes who opted for college programs with more resources and equipment.

Fueled in large part by the visits to Howard by Christopher and Maker, HBCUs have become part of the conversation for top basketball recruits. North Carolina Central made headlines in January for sending an offer to Bronny James. Highly touted high school athletes Trevor Keels and Brandon Huntley-Hatfield have picked up increased interest from HBCU programs.

More recently, high school prospect Mikey Williams tweeted hinting interest in HBCUs when he wrote, “Going to an HBCU wouldn’t be too bad…”

He tweeted again on Thursday, further adding to the speculation.

Additionally, Oklahoma City Thunder guard Chris Paul announced this week that he would team up with Roadside Entertainment to produce a docuseries on basketball programs at HBCUs.

With the growing interest in HBCUs, all eyes will be on Maker as he embarks on his new journey at Howard. Prior to playing a single game at the university, he has already contributed to the changing narrative around HBCU basketball.