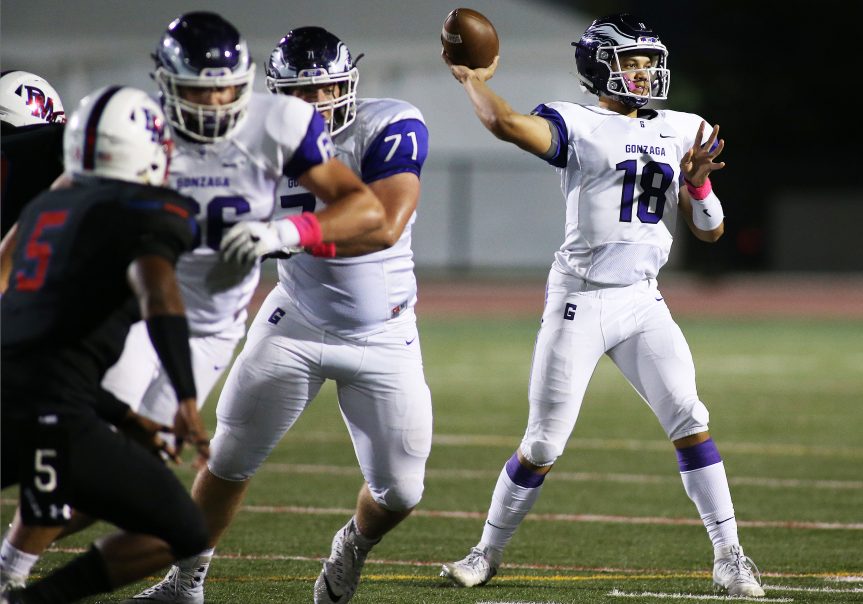 WASHINGTON — Gonzaga College High School’s Caleb Williams, widely regarded as one of the nation’s top prospects in football, announced his commitment to the University of Oklahoma on Saturday evening.

The five-star quarterback, ranked No. 4 overall in the class of 2021 by 247Sports and No. 1 overall as a dual-threat quarterback by ESPN, had more than 20 offers, including Alabama, Maryland, Clemson, LSU and Florida State. The 6-foot-2, 210-pounder made the announcement via Twitter and on a live broadcast of CBS Sports HQ.

“With the past three quarterbacks, I honestly felt like it was for me…with what Coach [Lincoln] Riley has been able to do, I kinda just want to learn and hopefully get to the next level,” Williams said in an interview with CBS Sports.

“I got a year [left] here [at Gonzaga], but I’m ready to go and gain the trust of my teammates, earn a starting spot and hopefully help them get to a national championship.”

Over the past few seasons, OU has emerged as a program that has produced high-caliber quarterbacks. Two of the last three Heisman Trophy winners – Baker Mayfield in 2017 and Kyler Murray in 2018 – played for the Sooners. Jalen Hurts, a recent second-round draft pick to the Philadelphia Eagles, was a Heisman runner-up in 2019.

Washington Redskins running back Adrian Peterson had a few words of acknowledgment for Williams, the rising senior at the Washington Catholic Athletic Conference (WCAC) football powerhouse in Northwest D.C.

“What’s up, Caleb? It’s all about making good choices. Welcome to the family, and I wish you nothing but the best. Boomer Sooner,” said Peterson, a former Oklahoma standout.

In addition to being named the MVP of the 2020 Elite 11 Finals for the nation’s top high school quarterbacks, Williams registered 1,770 passing yards for 19 passing touchdowns and 838 yards on the ground for 18 rushing touchdowns in the 2019 season.

One of the unforgettable moments of Williams’ prolific career was a last-second heave into the end zone to win the 2018 WCAC title game over DeMatha as a sophomore.

The latest member of OU’s class of 2021 recruiting class, Williams has been esteemed as “the most talented quarterback prospect to come from the Mid-Atlantic region in a decade” and “projects as a multi-year impact starter at the Power Five level with the upside to first round if not top 10 pick in the NFL Draft” according to an assessment by 247Sports’ Charles Power.

Gonzaga head coach Randy Trivers weighed in on Williams making the jump to the next level.

“Caleb Williams is rare talent,” Trivers said. “His excellence is most prominent when a competitive challenge arises. Oklahoma is fortunate to get this Eagle to eventually wear the Sooner uniform.”