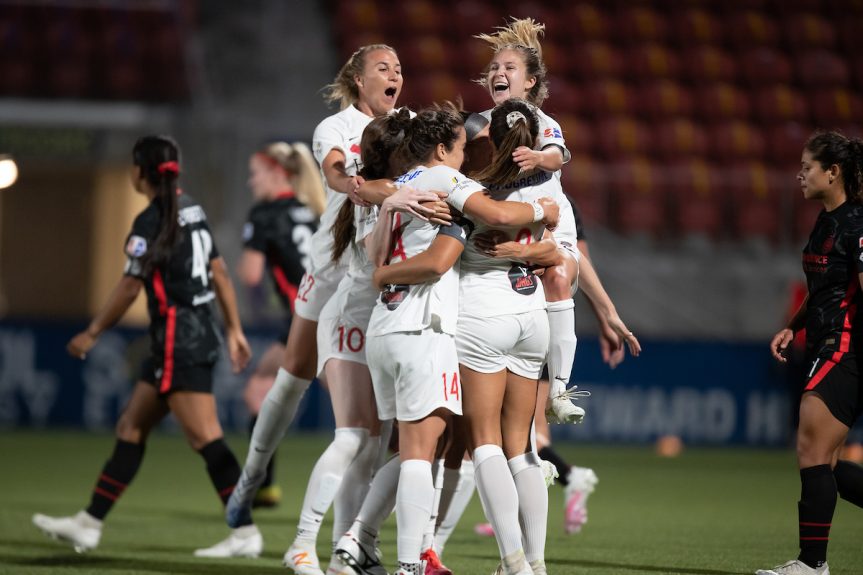 WASHINGTON – A simple corner kick turned into a magical moment for the Washington Spirit against the Portland Thorns in the NWSL Challenge Cup on Sunday.

Midfielder Dorian Bailey fired off a short-lobbed pass to striker Ashley Sanchez standing on the edge of the penalty area. The former UCLA starter flicked a backheel in the air, keeping the ball in play and floated it over a sea of defenders, before finding teammate Samantha Staab.

The Spirit center back connected with a snapping header that beat a save attempt by Meghan Klingenberg for a surprising goal.

“I saw the ball going out and tried to get something on it to keep it in the mix,” Sanchez said about her surprise assist. “We were down one, so I was doing whatever I could.”

“That was not a rehearsed play,” Washington head coach Richie Burke said. “That was not something that we expected; I don’t think she expected it. It was more like a kung-fu move, but we will take it under the circumstances.”

The corner kick magic capped off multiple attempts Washington failed to capitalize on. Staab’s goal helped the Spirit earn a 1-1 draw over the Portland Thorns.

With the result, the Spirit (1-1-1) regained some of its momentum back it had lost after losing to the North Carolina Courage in their second tournament match. Washington sits in fourth place (four points) heading into their final non-knockout game.

Washington tested its depth once again, starting the match without striker Ashley Hatch and midfielder Rose Lavelle. Ashley Sanchez and Kumi Yokoyama returned to the starting lineup, and rookie Averie Collins made her first professional start in the midfield.

The squad rotation allowed Portland to have most of the ball possession and scoring opportunities in the first half. The Spirit regained its composure after the hydration break midway through the half with two of its three shots going on target.

After halftime, Hatch was subbed on and immediately impact the game as Washington pushed the ball onto Portland’s half. In the 63rd minute, Hatch almost equalized with a left-footed crossbody shot that goalkeeper Bella Bixby saved.

Portland opened the scoring six minutes later as Klingenberg floated a midfield free kick to a diving Lindsey Horan into the penalty area for a header goal.

Despite the goal, Washington continued its offensive push, subbing on Lavelle to add more attacking firepower that paid off with Staab’s goal.

In the 88th minute, Horan attempted one more shot for Portland, a right-footed attempt from outside the penalty area. However, Spirit goalkeeper Aubrey Bledsoe made a diving save to smack the ball away from the far post to keep the game leveled.

The Spirit faces the Houston Dash in their final fixture before the knockout rounds on Sunday at 12:30 p.m.