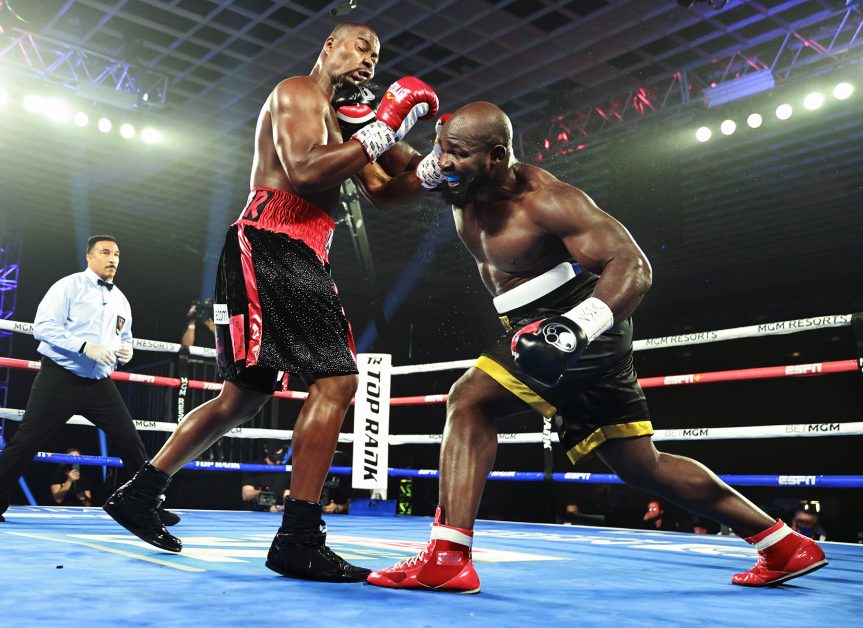 Takam ended Week 5 inside the MGM Grand “Bubble” with a 10-round unanimous decision over Jerry Forrest by scores of 98-92, 97-93 and 96-94. A former world title challenger and 2004 Olympian, Takam notched his fourth consecutive win following back-to-back defeats at the hands of Anthony Joshua and Derek Chisora.

Forrest (26-4, 20 KOs) closed the fight strong as the aggressor and won three of the last four rounds on two of the judges’ scorecards. According to CompuBox, Takam landed 27 more power punches (84 to 57).

“My father passed away a week ago, so I came into the fight with a heavy heart. It may not have been a spectacular knockout, but most importantly, we got the win,” Takam said. “We took this fight on short notice, but the opportunity on ESPN was too big to pass up. We knew we could beat him regardless.

“I want anyone in the top five, or a title shot if that materializes.”

— Carlos Castro (26-0, 11 KOs) defeated the most notable name of his career, knocking out former world title challenger Cesar Juarez (25-9-1, 19 KOs) after Juarez’s corner stopped the one-sided bout following the conclusion of the fourth round.

Juarez has now lost two fights in a row.

“I admire Cesar Juarez as a Mexican warrior and for everything he’s given the sport. I told him it was an honor to share the ring with him,” Castro said. “I want any title opportunity or an interim title shot. Whatever comes my way, I am ready. I am highly ranked and prepared for the next step.”

In a scheduled four-round welterweight fight that featured the rare double knockdown, Corey Champion (2-3, 2 KOs) knocked out Peter Cortez (2-2, 1 KO) in the opening round. Champion knocked down Cortez early in the round, then the double knockdown occurred. Champion roared back to stop Cortez in an instant undercard classic.