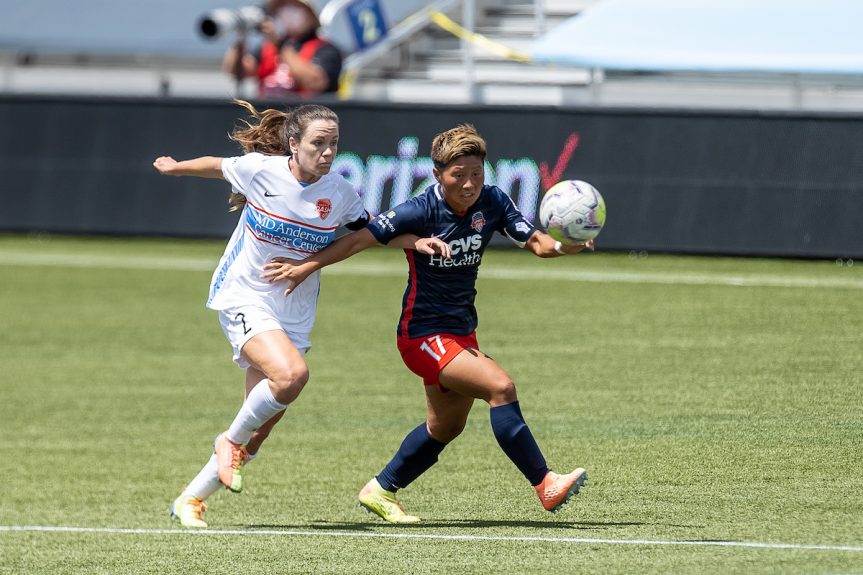 WASHINGTON – A 16th-minute goal by midfielder Bayley Feist was enough for the Washington Spirit to capture a 1-0 victory over the Houston Dash in their fourth match in the NWSL’s Challenge Cup.

Washington (2-1-1) ends the preliminary round with seven points. Pending the results of the final three matches in the stage, the Spirit could finish as high as second place in the eight-team tournament before the knockout rounds begin.

It did not take long for the Spirit to start pressing forward with several opportunities on goal against a fatigued Houston side. The Dash (1-2-1) last played on July 8, their fourth game in 12 days, whereas their Washington counterparts had a six-day layoff.

With their opponents unable to wrestle the ball away, Washington bombarded ahead with forwards Kumi Yokoyama and Ashley Sanchez setting up attacks from the flanks. Using their speed, the Spirit fired three shots on goal in the opening 15 minutes.

Yokoyama elected to slow down the pace in the 16th minute and send a lateral pass to striker Ashley Hatch on the top of the penalty area. The former Brigham Young University star elected to pass the ball to an approaching Feist, who took two dribbles before unleashing a right-footed shot for the goal.

“That one felt good; I was due for a goal,” Feist said. “I saw (Hatch) dribbling the ball up the sideline, and she cut it back. I kinda opened my body up a little bit, took a touch, placed it well and it went in.”

Washington continued to dominate as they finished the first half with 69% of the ball possession and outshoot Houston, 8-2, in on-target attempts. One of the Dash’s efforts did almost tie the game as striker Rachel Daly beat defender Tori Huster to a loose ball and hit a shot off the crossbar moments before halftime.

Five minutes into the second half, Washington captain Andi Sullivan came down with a non-contact injury on her left knee. She limped off the field on her own power when subbed out.

In his postgame press conference, Washington Spirit Head Coach Ritchie Burke said team doctors believed that she reaggravated a previous injury on her meniscus and will have an MRI performed after the game.

“Hopefully, she is ready to go 90 minutes next week in the next round,” Burke said.

However, today, the team announced that Sullivan suffered a torn meniscus and will miss the NWSL Challenge Cup.

“The team is rallying around our captain and incredible leader, and we are now highly motivated to play extra hard in her honor,” Burke said. “It’s amazing how many well-wishes I’ve received from everyone in football about Andi, and it’s a testimony to her popularity as well as the amount of respect she has from people at the highest levels of the game.”

Sanchez looked poised to help Washington add a second goal when she ran down the left flank and cut inside into the penalty area, sending in a low pass to Hatch. However, goalkeeper Jane Campbell denied her attempt to score with a quick save.

Houston continued to struggle until forward Katie Stengel’s left-footed shot in the 67th minute flew over goalkeeper Aubrey Bledsoe’s head towards Washington’s goal. However, defender Paige Nielsen headed the ball out of danger for the Spirit’s first shutout of the tournament.

While being seeded high for the knockout stage is important, health is a more significant concern going forward, Burke said. Star midfielder Rose Lavelle missed the Houston game due to a reported ankle injury.

“They are well bought-in to our tactics and methodology, and we are well unified,” Burke said. “I think we are in a good place.”