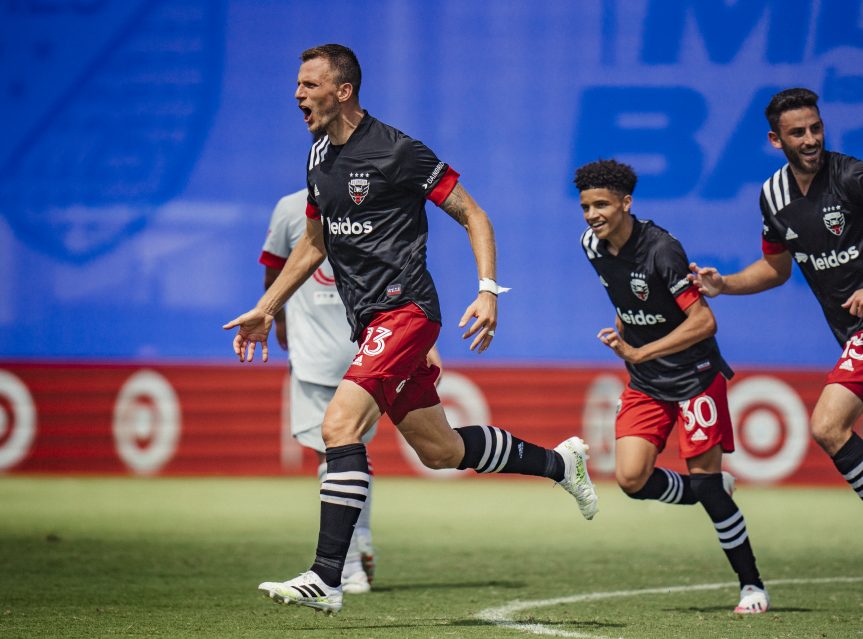 WASHINGTON – In their MLS is Back Tournament debut, D.C. United mounted a heroic two-goal comeback, scoring twice in the last 10 minutes while down to 10 men, to tie last year’s Eastern Conference Champions Toronto FC 2-2 in Orlando, Florida, on Monday.

With the result, United (0-0-1) earned a critical point against a former MLS Cup contender, which will carry over into their regular season after the tournament. The game was originally scheduled for Sunday, but due to COVID-19 testing complications, Major League Soccer postponed it for a day.

The 20-year-old striker made an impact during the 12th minute when he received a pass from teammate Alejandro Pozuelo from the top of the penalty area.

Akinola made a quick turn before unleashing a 21-yard strike into the lower right side of the goal net to give The Reds (0-0-1, 1 point) a one-goal advantage.

“We weren’t able to make them uncomfortable enough; [Toronto] is a very good team where if they have time and space, they’re going to get good looks, but saying that, the goals are very soft.” United head coach Ben Olsen said. “We had plenty of numbers around the ball for the first goal and in the second one, we gift it to them. So, we find ourselves in a two-zero hole.”

Adding to its woes, United also went down 10 men before halftime when midfielder Júnior Moreno was ejected from the match after receiving his second yellow card on a late tackle from behind to Toronto midfielder Marky Delgado.

Heading into the second half, Olsen decided to make several substitutions, including giving 17-year-old Kevin Paredes his professional debut and defender Oniel Fisher making his second appearance since a 1 1/2 year injury. However, the changes did not lead to immediate results.

Things changed in the 80th minute when veteran midfielder Federico Higuaín made his United debut. The Argentine playmaker would not take long to make an impact.

Four minutes after entering the match, a Toronto pass was intercepted by midfielder Russell Canouse and quickly distributed to teammate Felipe Martins.

The Brazilian knifed a pass in between the Toronto backline to finding a running Higuain wide open. The 35-year-old lobbed the ball over Westberg for his first goal with the Black-and-Red.

“And at the moment, I faced the goalkeeper, I knew the distance between him and I and how it will give me the opportunity to chip it,” Higuain said. “I’m confident of my game, my teammates, trust in [myself], and that’s why I tried that shot. It was a good goal, and it was a goal that helped us believe that we can tie the game.”

A minute into stoppage time, after being awarded a foul near midfield, Martins centered a long cross to Birnbaum, who headed the ball across the penalty area to a waiting Brillant.

The French defender connected with a header of his own past goalkeeper Quinten Westberg to tie the match. The goal, his second of the season, was more than enough to avenge his first-half mistake.

“I was sad for the team with this mistake, (but) the team didn’t blame me,” Brillant said. “During halftime, they push me and it gave us a good mentality that we have to keep it for the rest of this tournament. We have to be a group as strong as we were with everything we did today.”

With seconds remaining, Akinola attempted a last-ditch volley to complete his hat-trick. Still, goalkeeper Bill Hamid made a fingertip save, pushing the ball over the crossbar to preserve United’s result.

Olsen credits his team for their gutsy performance and believes that, despite their first-half performance, United showed promise after a four-month layoff.

“To get something out of that game, I think it says a lot about our group,” Olsen said. “Yes, we can get better. But this is a marathon and the trick in these tournaments is to keep pushing and getting better throughout the tournament.”

United’s next match is against the New England Revolution on Friday, July 17, at 8 p.m.