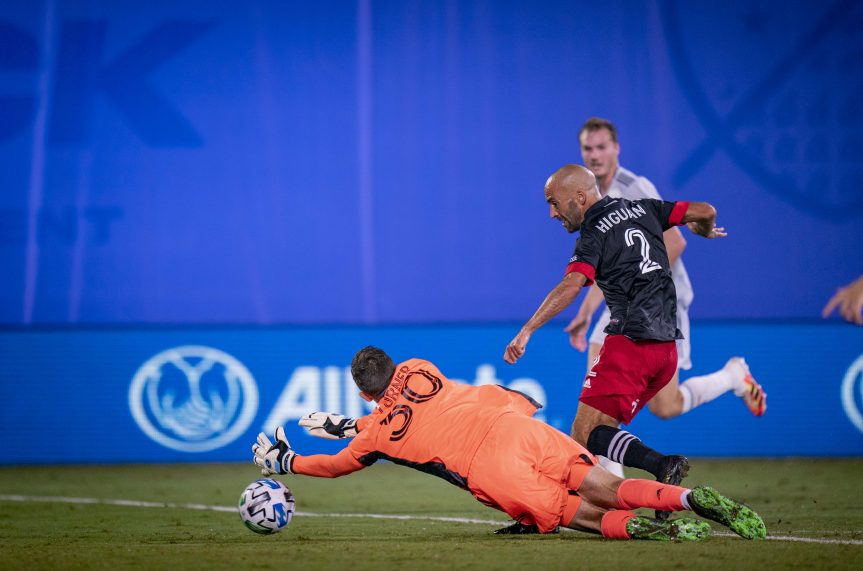 Federico Higuaín’s goal in the 72nd minute was enough to help D.C. United manage a 1-1 draw against the New England Revolution Friday night in Orlando, Florida, in Group C play in the MLS is Back Tournament.

United was down a goal once the veteran midfielder entered the game in the second half. It would only take three minutes for Higuaín to make an impact as he intercepted an attempted back pass from New England defender Antonio Delamea Mlinar to goalkeeper Matt Turner.

Higuaín took the ball and quickly connected a low strike past Turner to help United tie the game. Since joining the club in March, the 35-year-old has attempted to prove that he still can be a high-level contributor after suffering an ACL injury last year with the Columbus Crew SC.

In two tournament games, Higuaín has shown to be an asset for United off the bench, scoring twice in critical moments.

“This is probably the first time in his life that he has been considered a super sub,” Head coach Ben Olsen said. “He is a guy who is always the focal point of a team from the beginning, and you build around him, but that is the mindset he has and the attitude he has had since coming here, his willingness to do his best to the team.”

With the result, the Black-and-Red ends the second round of group matches in third place (two points) behind Toronto FC and New England (four points).

United made multiple changes from the starting 11 that played in their 2-2 draw against Toronto FC on Monday. Defender Oneil Fisher made his first start since Sept. 29, 2018, due to a year-and-a-half-long knee injury. Argentine Yamil Asad took Ulises Segura’s spot in the midfield.

Lastly, Erik Sorga, a 20-year-old striker from Estonia, made his first start for United after Ola Kamara sustained a quad injury.

After a scoreless first half, New England would find the back of the net first. An attempted shot from midfielder Cristian Penilla rebounded off a United player and landed in front of Adam Buksa. The striker headed the ball over a diving Bill Hamid for a Revolution goal.

“It’s frustrating going down 1-0 and having to fight from behind again,” United midfielder Russell Canouse said. “But there is a big belief in this team, a good mentality.”

United bounced back with Higuaín’s goal, putting themselves in position to advance with a win over Montreal Impact in their final group match on Tuesday, July 21, at 10:30 p.m.

“It’s good for us,” United captain Steve Birnbaum said. “Right now, we control our own destiny…We have to get something out of this game, and we know it.”