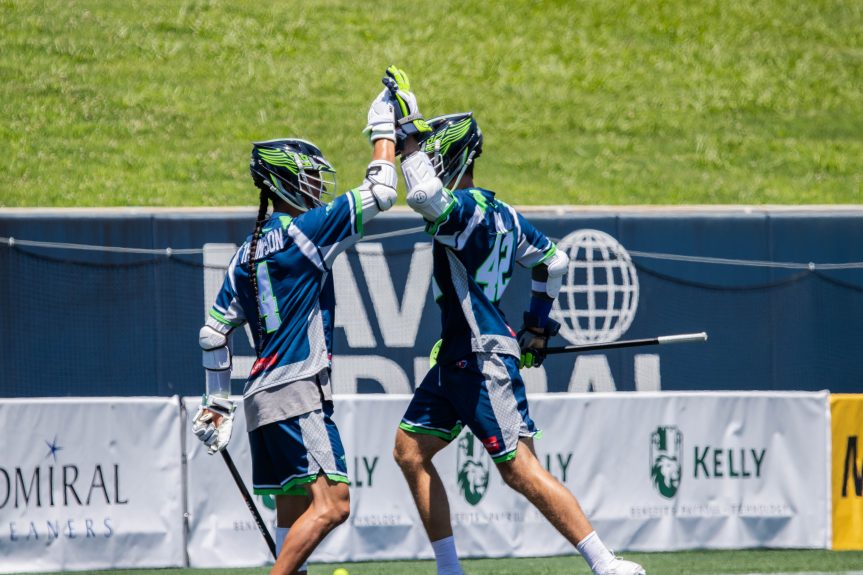 ANNAPOLIS – On a sweltering July day that marked the opener of the 20th anniversary Major League Lacrosse season, the Chesapeake Bayhawks looked comfortable playing on their home turf as they defeated the Philadelphia Barrage 16-11 Saturday night.

The Barrage took control of the game early, seizing a 2-0 lead by 10:53 in the first quarter. The first goal of the 2020 MLL Season was an unassisted strike by Tommy Palasek.

After falling behind early, the Bayhawks scrambled to stop the bleeding. The tide began to turn when Andrew Kew snagged two goals, getting the team some momentum.

Nate Solomon took a big hit in traffic near the end of the first quarter while still managing to make the play and score for the Bayhawks. The first quarter ended tied 4-4.

While Philadelphia set the pace in the early minutes of their return outing, the defending champion Bayhawks were quick to adjust, turning what appeared to be a blowout into a punch-for-punch shootout.

Unsurprisingly, both Barrage and Bayhawks played a scrappy game, full of big hits, collisions, and taunts. Four months of cooped up energy hit the field with force. Despite this, there was little sign of rust present on the roster. Aside from the occasional dropped ball, Chesapeake was sharp, precise, and focused as they readjusted to the physicality of the game.

After the first three quarters, neither team had held a lead for an extended period. Both teams entered the fourth quarter with ten points on the board.

Kew was the saving grace of the day, shooting perfect from the field, accounting for 7 of the Bayhawks points, including one 2-point goal.

While his presence was felt from start to finish, in the fourth quarter Kew was an omnipresent offensive force for Chesapeake, turning the tables and unleashing a barrage of undefendable shots against Philly to gain a 16-11 lead and clinch the opening game.

“We went down early, and we kept believing,” Kew said. “We had a long time off, everybody, and we knew it was eventually going to come. We got the ball and we were able to come back and eventually take a good win to start here.”

Solomon and 2019 MVP Lyle Thompson logged three goals each. Ryan Keenan snagged two and Luke Anderson and Shane Simpson both got one.

The Bayhawks struggled in the faceoff by a large margin of 11 to 20, all thanks to Alex Woodall of the Barrage keeping a strong grip on the challenge, facing off in all 31 of the game’s head-to-heads.

While the Bayhawks were able to rely on Kew’s perfect game to secure the first win of the season, there is no doubt that head coach Tom Mariano and the players saw where work needed to be done if they are going to secure another title.

Adjustments and preparation were the names of the game, as what looked like an uphill battle quickly turned into a cage match.

“Our coaches and our players bought into us pre-game and really did a great job preparing for this game, and I thought as we weathered some punches that preparation paid off,” Mariano said.

If lessons are to be learned, they will have to be expeditious. The Bayhawks take the field again against the New York Lizards on Sunday.