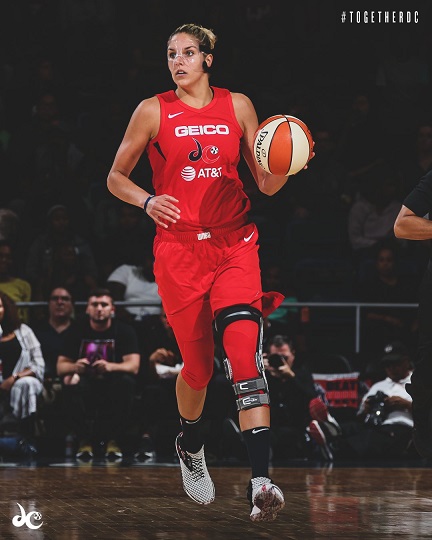 WASHINGTON — As the Washington Mystics prepare to compete in a shortened season at IMG Academy in Florida, the status of its star player Elena Delle Donne remains unknown.

Delle Donne requested to be medically excused from playing in the upcoming season due to medical concerns dealing with chronic Lyme disease. However, a panel of doctors hired by the league denied her request.  Delle Donne faced a tough decision: Either play to be paid her salary but possibly exposing her compromised immune system or sitting out the season.

The Mystics elected to help their superstar, announcing that they will pay Delle Donne her full salary (reportedly $215,000), even if she does not play due to coronavirus concerns.

Washington head coach and general manager Mike Thibault said during a media conference call that the organization plans to pay her regardless if she enters the WNBA bubble in Florida, calling her deal a “guaranteed contract.” He also said that the Mystics would support Delle Donne in whatever decision she makes for her health.

“The fact of the matter is that the Mystics organization will never put Elena’s or any of our other players’ health and well-being in jeopardy at any time,” Thibault said.

Delle Donne shared the letter of her request denial with the Mystics, but the team couldn’t release an announcement regarding the situation unless she made a public statement first, Thibault said.

The two-time MVP did go public, writing an article published on The Players’ Tribune about dealing with chronic Lyme disease for more than a decade, claiming she takes 64 pills a day to keep playing basketball.

As the league began to review her case, Delle Donne said she thought she would be granted an exemption. It would allow her to keep her salary despite not playing this season. After talking to her doctor about her history of flare-ups, Delle Donne was told she was “at high-risk” at contracting and recovering from COVID-19.

“I didn’t need a panel of league doctors to tell me that my immune system was high-risk — I’ve played my entire career with an immune system that’s high-risk,” Delle Donne said.

Washington plans to work with Delle Donne in raising awareness about the effects of Lyme disease, Thibault said. She will have access to continue rehabbing her back injury at the team training facility in Washington.

“As in the past, both with her Lyme disease history and her on-court injuries, all decisions about her ability to play will be made jointly with Elena,” Thibault said. “She is part of our roster, she’s being paid, and is continuing to rehab from her off-season back surgery.

“If at some point later in the season we are all comfortable – I mean all comfortable enough – with both her physical progress and the safety of joining the team in Florida, then we will make those arrangements.”

Meanwhile, teammate Tina Charles opted out of the season and decided not to travel with the Mystics due to medical concerns stemming from extrinsic asthma.

According to a team statement released Friday, the forward has been medically excused by the league’s independent panel of physicians from participating in the 2020 season.

“While we are disappointed that Tina will not be with us this summer, we fully understand the reason for her medical exemption and look forward to having her with us next season,” Thibault said.

“The health of our players takes precedence. There hasn’t been anything normal about playing this season, but we are prepared and excited to play with the group that is here in Florida.”