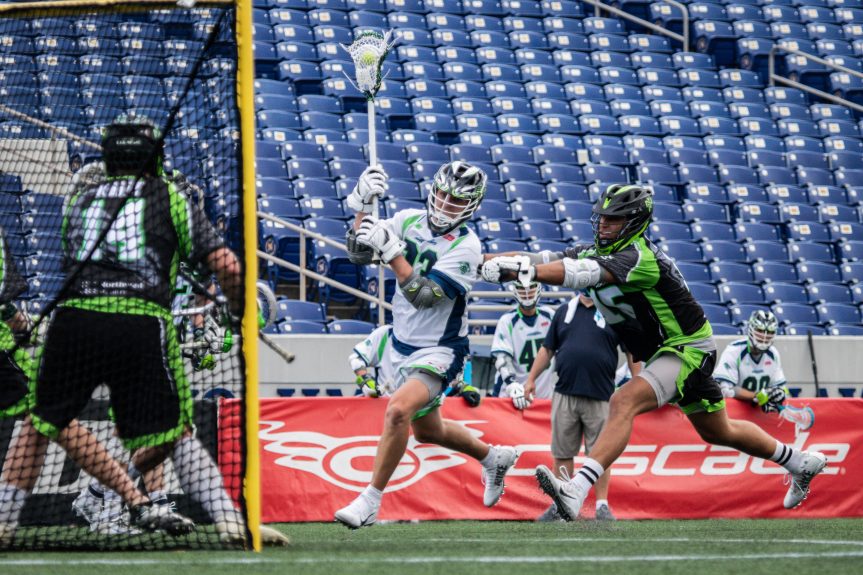 In their second game of the 2020 season, the Chesapeake Bayhawks struggled to get things going with their offense but stayed composed to produce six straight goals in five minutes, propelling them to a decisive 18-13 victory over the New York Lizards.

In what is becoming a trend, the Bayhawks stumbled out of the gate, allowing the Lizards to strike quickly and gain a 4-0 lead behind a hat trick from Dylan Molloy and another goal from Nicky Galasso.

Colin Heacock opened the scoring for the Bayhawks with 41.4 seconds left in the first quarter, to put them on the board, and Andrew Kew mirrored that 20 seconds later to make it 4-2 going into the second quarter.

Starting the second period, Isaiah Davis-Allen converted on a transition goal to cut their deficit to one, and Chesapeake took control from there.

The Lizards went cold in the second quarter, allowing Chesapeake to course correct. Great ball movement and team play yielded the Bayhawks a 9-6 lead going into the half, with Nick Mariano scoring two goals.

One of the biggest factors that gave Chesapeake the win today was ball movement and working as a team to score eight unanswered points.

CJ Costabile’s two 2-point goals were the game-changer in today’s game. It gave Chesapeake a seven-point lead with 6:00 minutes left in the third quarter, and the Lizards struggled to find momentum after that. Costabile also notched an assist to finish the day with five points.

While Brian Phipps struggled early to contain the Lizards offense, he finished the day with 16 saves and was an important factor in getting Chesapeake back on their feet.

Despite 2019 MVP, Lyle Thompson struggling to connect with the goal, shooting 3 for 12, and Andrew Kew cooling after his red-hot game on Saturday, the Bayhawks were an all-around offensive force, with nine players logging points for the team.

“The best thing about this team is that everyone plays a role, and the next man’s gotta step up if you have some injuries going on,” Costabile said. “Early on, we were a little bit sloppy in transition. Being one of the older guys, I feel like I need to take some responsibility on that and get the boys going. Faceoffs we had a little bit of injuries today, but the next guy steps up.”

Molloy looked like the Lizards’ saving grace in the forefront of the game, but a poor shooting performance after the first quarter let the Bayhawks’ team-based offense push a strong lead going forward.

After Chesapeake secured their big lead, the Lizards scored three straight goals in three and a half minutes, but it was not nearly enough to recover.

While this was the second straight win for the Bayhawks, there is no time to slow down in this abbreviated season. In what is sure to be an ongoing factor, heat and fatigue played a key role in today’s game, as cramping and exhaustion were a notable hindrance to performance.

With a matchup against a tough Boston Cannons team on the horizon, the Bayhawks must be quick to adapt and overcome if they want to repeat their title. Recovery will play a vital role in how to how this team can finish the season.

“It’s a marathon, not a sprint,” Costabile said. “So you gotta really be able to take care of yourself and I think that’s what we’re doing.”