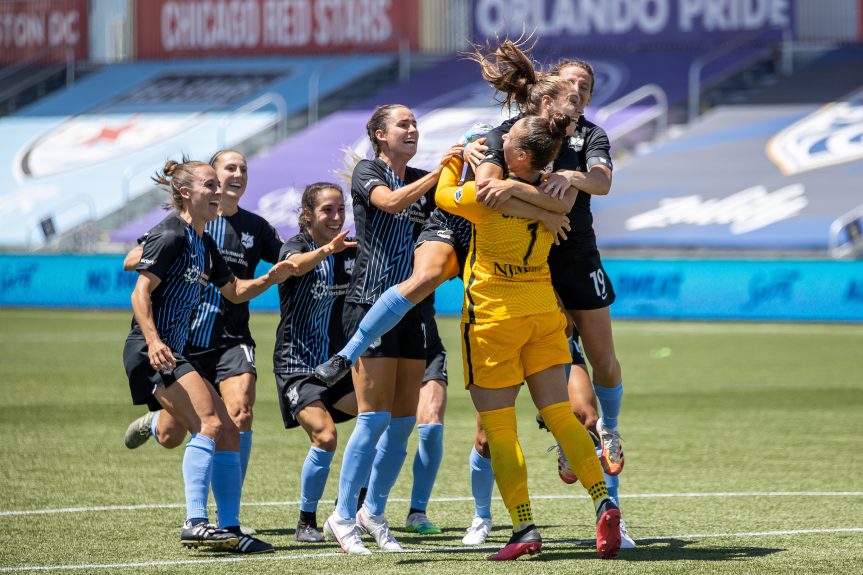 Bayley Feist slowly walked back to the center of the field at Zion Bank Stadium into the waiting arms of her Washington Spirit teammates. Goalkeeper Kailen Sheridan saved the midfielder’s penalty kick attempt to end a best-of-five shootout in their NWSL Challenge Cup quarterfinals match vs. Sky Blue FC.

Sky Blue FC players rushed to celebrate with Sheridan as Feist walked towards head coach Richie Burke. He hugged her immediately, reminding her that she was a good footballer. Despite playing exciting offensive soccer throughout the tournament, Burke said their lack of experience in critical situations proved to be a difference.

“When you get in a situation like that, sometimes nerves take the better of you, and some young players don’t take the same penalties that they take in training for whatever reason, and here we are,” Burke said.

The Spirit remained scoreless by the end of regulation time against Sky Blue FC. Their run came to an end after two missed attempts in a 4-3 loss on penalty kicks Saturday.

Washington was riding high following the primary stage, finishing as the No. 2 ranked team and highest seed remaining in the Challenge Cup following the North Carolina Courage’s loss on Friday.

Against the No. 7 Sky Blue FC, the Spirit were without captain Andi Sullivan due to a meniscus tear injury. U.S. Soccer, who monitored all U.S. Women’s National Team players conditions throughout the tournament, placed a minute’s restriction on midfielder Rose Lavelle, which forced Burke to start her on the bench and bring her in midway through the second half.

Both teams struggled to find an offensive rhythm in the first half. Washington’s best chance came in the 42nd minute came as Tori Huster delivered a cross from the edge of the penalty area to find a diving Ashley Sanchez for a header. Sheridan slapped the attempt down for the save.

Sanchez tired again two minutes before halftime with a one-timer from behind the penalty spot, but it was stopped yet by the Canadian international. Sheridan finished regulation with seven saves.

Eight minutes into the second half, forward Kumi Yokoyama received a pass from fellow striker Ashley Hatch to connect with a volley attempt at the Sky Blue goal. While the shot flew past Sheridan, the ball ricocheted off the goal post, keeping the match scoreless.

“I think that’s something we are going to have to work on, just being clinical on the final third, and not just down to [Hatch] scoring a game-winning goal,” Huster said.

Following a scoreless 90 minutes, the game went to a penalty kick shootout to settle who would go to the semifinals. After both teams scored in the opening first two rounds, Washington goalkeeper Aubrey Bledsoe dove to her right to save midfielder Dominique Richardson, opening the door for the Spirit to take the lead.

However, Spirit defender Sam Staab fired her shot over the crossbar, keeping the score tied at 2-2. After another round of converted penalties, Elizabeth Eddy scored for the New Jersey-based side, putting on the pressure on Feist to score to send the game to sudden death.

However, the midfielder’s right-footed attempt was safely handled by Sheridan, eliminating the Spirit.

“We didn’t lose today; we lost in a penalty shootout,” Burke said. “We didn’t lose a game. We dominated it, and one of the things we need to take from this tournament is, and the take away from a lot of [this] game is a little bit more danger.”

Going forward, the Spirit will use the tournament to springboard them as one of the elite teams in the NWSL. Burke said he was proud of the growth all the team’s draft picks made, becoming talented role players to their possessive-based attack. He expects all the players to feel prideful about their success as they transition to the next part of their season.

“We’re a young team.,” Bledsoe said. “I know we’ll bounce back. Hopefully, the offseason isn’t too long this year. We’ve got lots of growth ahead for us.”