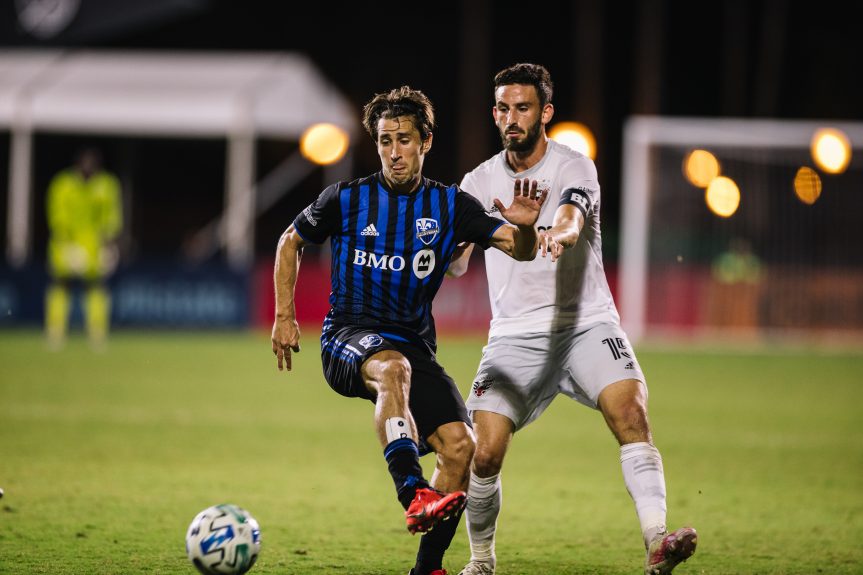 WASHINGTON – From false-positive coronavirus tests and multiple schedule changes, D.C. United has gone through a roller-coaster experience during its trip to the Walt Disney World Resort in Orlando, Florida, for the MLS is Back Tournament.

The off-the-field calamities did not add extra fuel to the Black-and-Red’s play once the group stage began. Despite all the negatives, United earned two draws, putting itself in a position to control its destiny. One win against the Montreal Impact Tuesday night separated United from a place in the knockout round.

Instead, United’s lack of attack stunned goal-scoring opportunities. An inadvertent deflection for the game’s only goal was enough to seal their fate as D.C. United lost to their Canadian opponents 1-0, knocking themselves out the tournament.

D.C. (1-2-2) leaves Orlando with more questions than answers. It finished group play in last place with two points and no wins. With the group stage matches transferring over to their regular-season record, United ends their Walt Disney trip sitting in ninth place in the Eastern Conference.

Thoughts of the future were not immediately on the minds of head coach Ben Olsen and his players following the match. Even after only having three days off between games, Olsen said he did not think his players were overly fatigue heading to their match against Montreal (2-2-1).

“I think we felt pretty good actually,” defender Steve Birnbaum said. “You know everyone’s in the same boat. It’s no disadvantage to anyone. Obviously, it’s the way the tournament is set up, and it’s a little awkward for everyone.”

Three changes were made from United’s starting lineup that played against New England on Saturday. Peruvian midfielder Edison Flores was out due to a hamstring injury but Junior Moreno returned to start after serving a red-card suspension. Former University of Maryland star defender Chris Odoi-Atsem made his first start in over a year, replacing Oneil Fisher at left back.

Early on, United fired multiple shots, including a right-footed attempt by Ulises Segura that flew over the crossbar. Other attempts were quickly stopped by the Impact defense.

In the 31st minute, Montreal’s Saphir Taider attempted a long-range shot, which bounced off defender Frederick Brillant and flew past a stretched-out Bill Hamid for the game’s only goal.

As the match continued, United struggled offensively. Despite having more shots (12-7) than Montreal, only three were on target. D.C. brought more firepower in second half with midfielders Federico Higuaín and Kevin Paredes and striker Ola Kamara entering the game. Their influence was limited and did not trouble goalkeeper Clément Diop.

“I felt like we were ready as a group today,” Birnbaum said. “We had good training before this, and we had a good game plan going into it, we just didn’t execute.”

The tournament was, Olsen said, a realization of the team’s lack of depth in talent and it will be important to add “a player or two” during the transfer window. However, when asked about the lack of team chemistry, Olsen shrugged the question off, repeating the word “no” multiple times.

United will take the next few days off after returning to D.C. and regroup for training next week. With the future of how the rest of the regular season’s schedule will look like going forward, United needs to be ready for the next challenge.

“We’ll wait for the league to see what’s next, whether it’s another tournament, whether it’s a league, Eastern/Western Conference setup, regional league games. I’m not exactly sure,” Olsen said. “But I know right now, we will get back, and we’ll get training and try to get better.”

The Sports Pulse’s Mario Amaya contributed to this story.