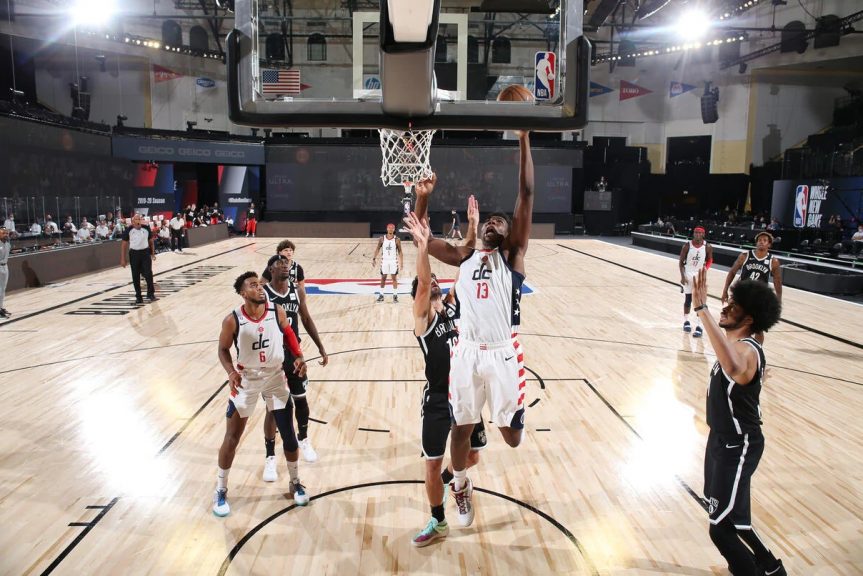 However, it wasn’t enough as the Washington Wizards fell late to the Brooklyn Nets, 118-110.

The Wizards played more engaged and disciplined on defense in their second contest in the bubble. The most positive developments came from Bryant, who scored in a plethora of ways aside from his usual inside scoring. He showed his outside touch by knocking down four 3-pointers and used a little bit of creativity with a mid-range step-back jumper.

“I just took what the defense gave me,” Bryant said. “My teammates had the confidence in me to knock down those shots. They kept telling me to take them, so I took them.”

One sequence from Bryant highlighted just how much he grew in his budding career. After tying the game up at 54-all and celebrating what would be his final 3-pointer of the night, Bryant narrowly missed Nets guard Caris LeVert (game-high 34 points, seven rebounds).

Bryant continued to push the ball up the court in an attempt to beat everyone down the floor for a late score and the lead going into the second half.

Generally, it would’ve been easy for a big man like Bryant to foul a faster guard like LeVert to prevent being exposed in transition. Instead, Bryant recovered just above the 3-point line. He sacrificed his body, drawing a charge as LeVert bulldozed through his body, celebrating a momentum-shifting defensive stop just moments before the halftime buzzer rang.

“I knew (LeVert) wasn’t really paying attention, he wanted to get the shot off quick,” Bryant said. “So I just tried to get my feet set, take a charge as best as I can because I knew he was going to keep moving. I got right in front of him and just took it right then and there.”

The moment encapsulated the type of effort the Wizards intended to play within the bubble, where they’ve prioritized development just as much winning.

On Sunday, the Wizards provided improved play. It wasn’t always perfect, but they executed when provided the chance.

For example, Brown showcased his playmaking chops in pick and rolls, being able to flip in floaters or fit in a bounce pass deep in the paint to Bryant for a dunk at the end of an 11-0 run early in the first quarter.

“(Bryant) brought the juice,” Washington Wizards Head Coach Scott Brooks said. “He gave us some offense. He committed on both ends. We need him to do that consistently. That’s how he has to play. I thought he was outstanding.”

The imperfect moments came late in the contest when the Wizards were struggling to score. Brown gave up back-to-back 3-pointers after Joe Harris (27 points, seven rebounds) found some room to tie the game up at 98-all with more than seven minutes remaining in the contest.

In the final five minutes, Washington turned to isolation play with Bryant forcing up a contested turnaround shot that earned him a tongue lashing from Brooks.

On the other end of the spectrum, LeVert scored back-to-back on a layup and floater. Bryant responded with a layup to make it a one-possession game. That was the closest the Wizards cut the deficit; however, Garrett Temple came right back at the Wizards with a floater of his own.

The Wizards are now 0-2 (24-42) in bubble play with the Indiana Pacers on the horizon today. Meanwhile, the Nets have essentially punched their playoff ticket now that they’re up seven games to the Wizards and face the Milwaukee Bucks, Tuesday.