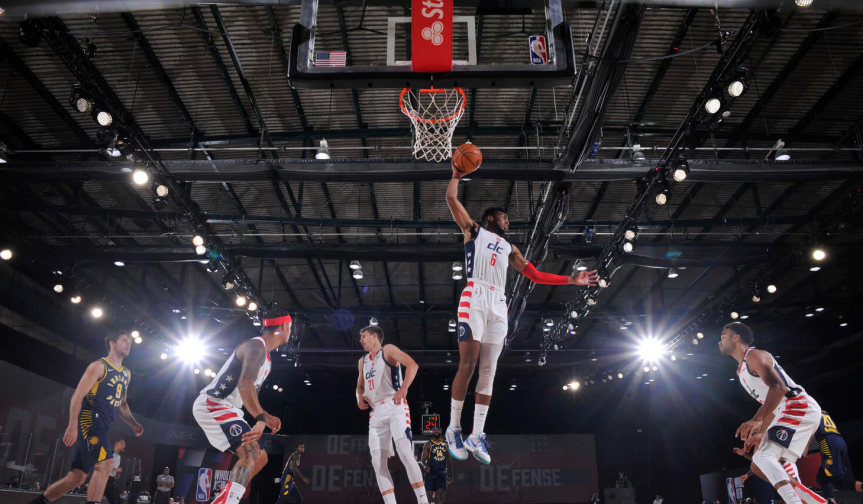 The Wizards ultimately fell to 0-3 in the bubble following a 111-100 decision to the Indiana Pacers on Monday.

Just two nights after scoring a career-high 53 points Saturday in a victory over the Philadelphia 76ers, T.J. Warren followed up with 34 points and 11 rebounds in the win.

Despite having trouble getting into a rhythm offensively, the Wizards showed off the resiliency that’s become their trademark since the contests regained their significance.

The case was evident with Robinson coming off the bench and not hesitating to shoot while creating his own opportunities. As his minutes rose, so did his confidence.

Troy Brown was a prime example too, rising to the occasion when given the opportunity. The third-year guard stuffed the stat sheet once again with 10 points, seven rebounds, eight assists, and as a reward, was placed at the point guard spot down the stretch.

“I think we were down 13 or 14 points with five minutes and (we) just wanted to get a different look,” Washington Wizards Head Coach Scott Brooks said. “Thought it was good, we played with a lot of desperation.”

The same thing occurred with Bryant, who is shooting the ball well and isn’t thinking twice about making his defender pay when they sag off him. Operating at a high level offensively, he’s also engaged defensively, who blocked three shots and altered many others at the rim.

“That energy is what we need,” Brown said. “He’s out there being vocal and just being Thomas Bryant, that’s what everybody knows him as and so to see him out there playing well and being the player he is, I think we’re all happy to see that. At the end of the day, we just gotta come out and win games, make sure we’re doing our jobs.”

All these factors contributed to the Wizards being able to hold a 38-31 lead in the second quarter. The only issue was not having an elite go-to scorer like Bradley Beal or a floor stretching sharpshooter like Davis Bertans (the Wizards top two scorers).

Indiana reeled off a 20-2 run, but Robinson stopped the bleeding with a 16-foot pull-up jumper to give Indiana a one-possession lead. However, Indiana wasn’t finished scoring eight more unanswered points and using that momentum to carry a nine-point lead going into the second half.

“I would say it’s more so of the communication side of things,” Brown said. “At the end of the day, we’re all NBA players and (the Pacers) aren’t running any crazy offense or anything ridiculous and so at the end of the day we gotta communicate and make sure we know when we’re switching and just having each other’s back is the biggest thing.”

It was more of the same for Indiana, who had a dominating 16-point quarter from Warren. That boost wasn’t met without any resistance as Washington clawed it’s way back to 68-66 deficit after Bryant knocked down a 3-pointer with 5:25 left in the third quarter.

After Turner responded with a dunk of his own after slipping past three defenders, Ish Smith (12 points, four assists) committed a costly turnover that sparked a 10-0 run; eight points coming from Warren.

That sequence included an and-one fadeaway from Warren, who converted despite hand fighting with Robinson, who was draped all over him.

Once again, Washington climbed it’s way back from a double-digit hole in the second half after Robinson drilled another mid-range pull-up jumper to make it 102-93.

Robinson tore through the Pacers defense in the final quarter, scoring 16 of his 17 when it mattered the most.

As always, the Pacers had an answer, relying on stifling defense and some clutch offense from Brogden and Holiday to close the game out.

Washington looks to rebound tomorrow at 4 p.m. when they play the 76ers. The Pacers win puts them just a game behind the Miami Heat for the fourth seed, with their next game coming up Tuesday against the Orlando Magic.