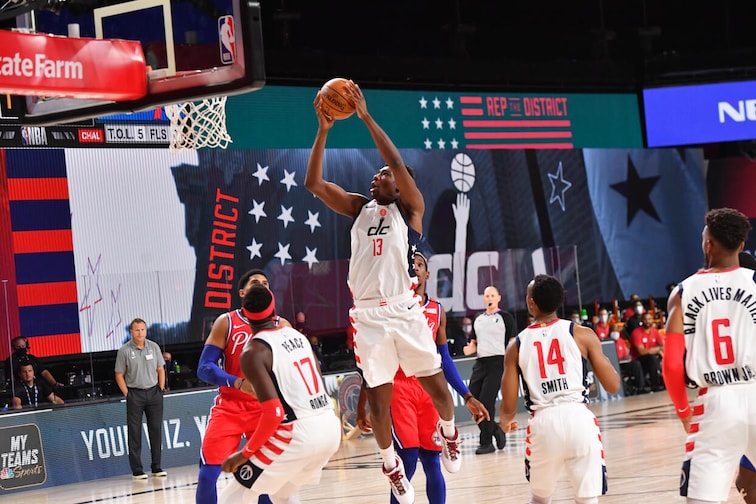 WASHINGTON – The Washington Wizards remain winless in the NBA bubble and are out of playoff contention after losing 109-98 to the Philadelphia 76ers on Wednesday.

Another double-double from Thomas Bryant (19 points, 10 rebounds) wasn’t enough to overcome a dominant performance by 76ers superstar Joel Embiid. The center had a double-double of his own, finishing with 30 points and 11 rebounds while also providing three steals and two blocks.

Despite losing their fourth straight contest, the Wizards have been battling and keeping their games competitive, head coach Scott Brooks said.

Against Philadelphia, Washington fought hard on defense to make multiple stops and securing rebounds. The offense was more decisive and brought bringing a hard-working mentality on the glass as it collected outscoring the 76ers 13-6 in second-chance buckets.

“I thought we were locked in all game long. That’s one of the most talented teams in this league. They’ve got everything you need,” Brooks said. “We battled with them every step of the way; we had about two or three minutes at the end of the third and beginning of the fourth where we just didn’t make any plays for one another, and we had some mistakes on the defensive end.”

Bryant was the epitome of that blue-collar mentality, playing one of his best defensive games to date, Brooks said. The second-year center blocked four shots and registering two steals.  His main tasks were guarding Embiid, who Bryant said it would be a tall task.

“Trying to make stuff difficult for him,” Bryant said of defending the likes Embiid. “Nothing easy, just trying to impact the game as much as I can, especially on the defensive side, which I know he’s a load down there.”

In fact, Bryant’s defense sparked a 12-0 run that gave the Wizards a five-point lead midway through the third quarter. His block of a Tobias Harris corner 3-pointer led to a pair of free throws by Troy Brown Jr. (17 points) down the other end. Later on, Bryant stonewalled Embiid as they fought for a rebound that Wizards forward Issac Bonga secured.

On the offensive end, Brown got in on the act for Washington, corralling an offensive rebound and sinking a floater to tie the game at 58. Moments later, the Wizards earned a one-possession lead when Brown rewarded Bryant with a layup out of the pick and roll.

“It was his best defensive game I’ve ever seen him play,” Brooks said about Bryant. “I think he needs to continue to focus on that end, we talk to him about it, we show film on it, and he steps up. He’s getting better.”

However, the playoff-bound 76ers fought their way back, regaining the lead in the fourth quarter with an 8-0 run, where Embiid contributed seven of those points. The Embiid effect was further felt when he torched the Wizards for 12 fourth-quarter points.

Embiid was not alone as swingman Tobias Harris scored 17 points. Wings Shake Milton and Jason Richardson added a combined 29 points to help Philadelphia. The trio carried the load in the second half after guard Ben Simmons exited the game with a left knee injury.

Even while dealing with Embiid, Washington kept the game close. The Wizards’ de facto No. 1 option, forward Rui Hachimura, knocked down 3-pointer to bring the Wizards to a 100-96 lead with 2:22 left.

Embiid then responded with a turnaround jumper over Hachimura and effectively put the game out of reach a few plays later with a one-hand dunk off a Matisse Thybulle assist.

Despite the loss, Brooks said there is hope for the future. Wizards guard Jerome Robinson scored 19 points, including two 3-pointers. Hachimura only scored eight points but found other ways to contribute with eight rebounds and two assists.

“We’re making every game a fourth-quarter game,” Brooks said. “We’re trying to figure out how to win some of these games, and that’s hard. It’s hard for any team, let alone a team that just doesn’t have a lot of experience. They’re going to keep battling, they’re gonna stick together, and that’s what I love about coaching this team.”