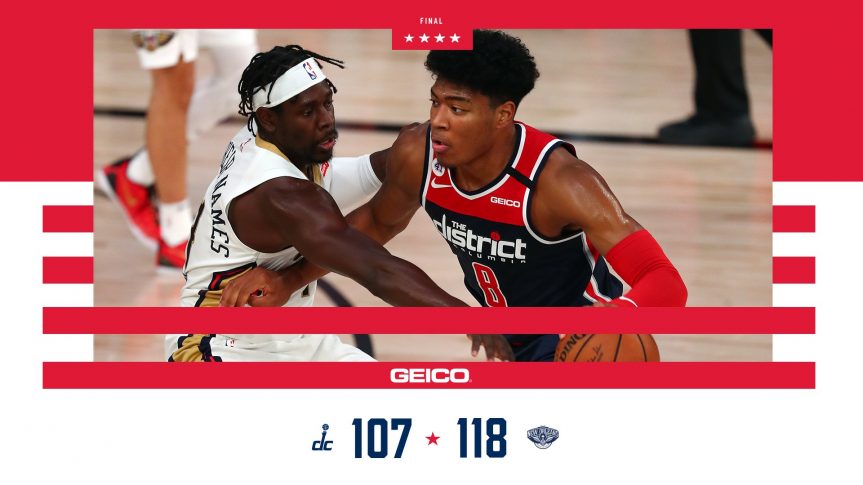 WASHINGTON – The Washington Wizards fell to the Zion Williamson-less New Orleans Pelicans, 118-107. The loss mathematically eliminated Washington and left the team with the ninth-best odds at the top pick in the 2020 NBA draft.

Rookie forward Rui Hachimura re-emerged to form after his scoring slump and found his rhythm early, finishing 7-8 field goal attempts in his first 18 minutes and maintained that fast start to contribute a team-high 23 points and six rebounds.

“When you see the ball go through the basket, you feel better about your game,” Washington Wizards Head Coach Scott Brooks said. “…With (Hachimura) he’s just so consistent, and he just plays the right way, he’s going to keep getting better, but I like the way he bounced back tonight.

Wizards guard Troy Brown Jr. continued to be a playmaking force after scoring 20 points and going a perfect 5-5 from distance. He had 10 rebounds and dished out five assists as well.

The play of the young guns contributed to the Wizards securing an eight-point lead in the first half. Washington was the model of efficiency, shooting 51.2 percent from the field and knocked down seven 3-pointers.

The Wizards relied on that hot shooting to hold the lead as large as eight early. With the halftime approaching, a late dunk and 3-pointer from Bryant was the difference in Washington holding a 56-54 lead just moments before guard Jrue Holiday (28 points, six assists, two steals) drilled a step-back 3-pointer to end the half.

However, Washington’s offense didn’t carry into the second half as the Pelicans ratcheted up the defensive pressure. The trio of Holiday, guard Josh Hart (10 points, eight rebounds) or guard Frank Jackson (13 points) always defended the full 90-feet of the court.

The strategy forced Washington to initiate their offense late in the shot-clock and also forced the Wizards to play in the half-court, instead of in transition like Washington prefers.

Holiday hounded Jerome Robinson in the backcourt during one possession in the third quarter, forcing an uncalled eight-second violation, ending in Hachimura forcing up a heavily contested 3-pointer.

“It’s tough because we came out with a tougher mindset,” Bryant said. “They punched us in the mouth, and it took us a while to respond back, and eventually, they got away with it.”

Pelicans forward Nicolo Meli initiated a 9-0 run with a 3-pointer late in the third quarter, which proved to be the push the Pelicans needed to keep Washington at bay.

From there on, the Pelicans built a lead as large as 16 after center Derrick Favors (12 points, 10 rebounds) tipped in his own miss. The closest Washington cut the deficit was 112-105 after Smith knocked down a 3-pointer in the second half.

Holiday responded immediately with a layup, and Hart finished an and-one opportunity with 33.5 seconds left for the final score. Washington will finish bubble play against Oklahoma City, Milwaukee, and Boston.

The lottery odds can’t improve since the NBA stated odds are based on team records through March 11.

“I’m still pleased with a lot of things that we’re getting accomplished down here. We’re very lucky to be in this situation. Brooks said.” We have three more games. We’re going to keep fighting together and keep building the future, what we need to work on.”

Washington will take on the Thunder tomorrow night at 12:30 p.m.