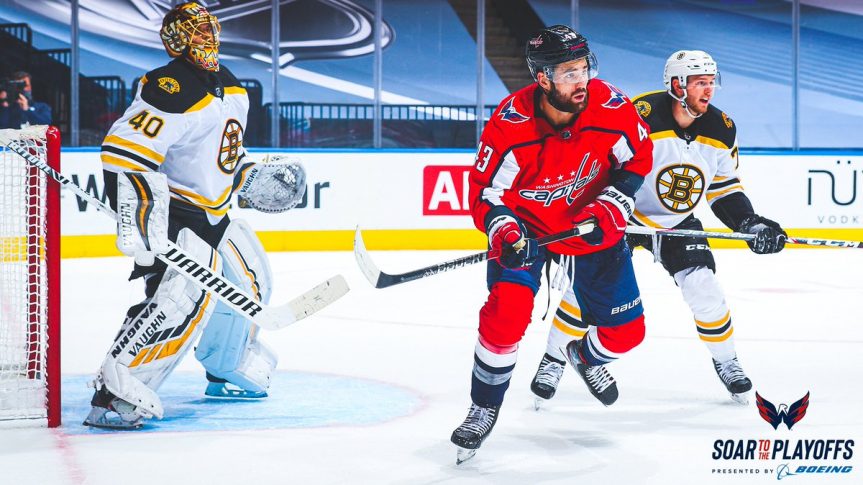 WASHINGTON – The Washington Capitals entered their final round robin game on Sunday with one point, but no wins. Before the official start of the Stanley Cup playoffs, they hoped to finish strong against the winless Boston Bruins.

The Capitals staved off a late comeback by the Bruins to hang on for the 2-1 victory to clinch the No. 3 seed in the Eastern Conference.

“We understand that once the playoffs begin, how we have to play,” Washington captain Alex Ovechkin said. “Lots of guys have been on the Stanley Cup championship team. We know what it takes.”

The Capitals had only two shots on goal in the first period, and luckily, one of them resulted in a goal. T.J. Oshie, heavily defended by Zdeno Chára, released a quick slap shot off the side of the net to tip the loose puck in the goal.

The second period was scoreless, as Washington and Boston battled for scoring opportunities while goalies Braden Holtby and Tuuka Rask made critical saves for their respective teams.

Washington extended their lead early in the third period when Tom Wilson hustled for the loose puck in the offensive zone, grabbed the puck, and fired a shot at the roof of the goal net.

“I think we’re building on our game,” said Wilson. “We’re feeling good about it. We’ve got to keep building, and it’s a fun time of year.”

However, the shutout ended with 9:30 left in regulation, as Bruins winger Jake DeBrusk ripped a shot past Holtby to make it a one-goal game.

The Capitals had many opportunities to add a third tally but were unsuccessful.

With the goalie pulled, Boston made a final push to tie the game, but Washington’s defense was able to keep them at bay, along with Holtby’s 30 saves, for the victory.

While penalties were a running theme for Washington in their previous game against the Philadelphia Flyers, where it finished with seven, things were different against Boston. The Capitals were disciplined and only committed five penalties on Sunday.

Despite the win, the Capitals struggled with giveaways, giving up the puck 19 times, while the Bruins only suffered 12 giveaways. Boston also dominated the faceoff battle, winning 39 times over Washington’s 22, and had more shots on goal (31-25).

With the win, the Capitals finish the round robin with a 1-1-1 record and three points. They will prepare to face the No. 7-seeded New York Islanders, led by former head coach Barry Trotz.

Holtby said the Capitals are ready to face a familiar foe in the Islanders and Trotz.

“It’s going to be a fun series,” said Holtby. “It’s going to make for some very good hockey, and right now, it’s up to us to make sure we’re mentally committed, everyone on our team to be ready for that, and it’s going to be fun.”