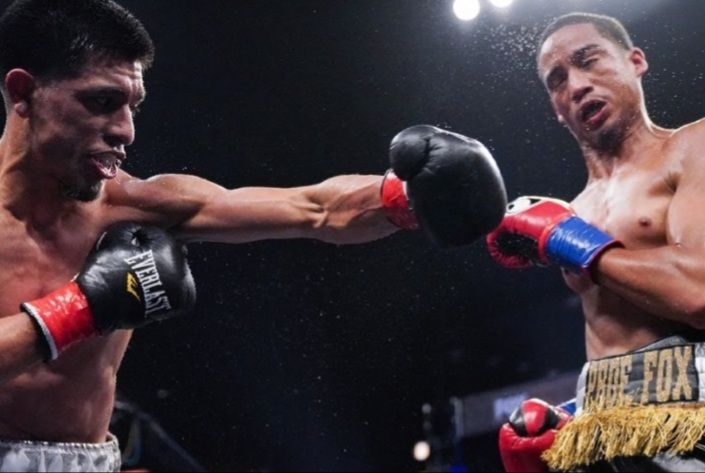 WASHINGTON – Professional boxer Mykal Fox traveled to California for the first time to resume his career after over four months of quarantine and social distancing because of the COVID-19 on Aug 8.

For the first time, Fox went down in a fight, as Luke Santamaria hit him with a barrage of punches in the first round, and Fox hit the lower rope before the referee called it a knockdown.

The judges scored a unanimous decision for Santamaria. No actual damage was done, but Fox showed a little rust in the first round.

It seemed that the gameplan against Fox, one of the tallest welterweights in the sport (6-foot-4), was to crowd him and make him work inside.

Santamaria did that for 10 rounds. Many times, he charged in with no strategy except to make Fox work. Some of his wild punches landed, but many were ducked and picked off by Fox.

Fox settled in and started using his long jab and was connecting on some good body shots as the fight progressed. Fox, not known as a heavy puncher, never hurt Santamaria, but he showed accuracy from long range.

That judge was saying that Fox won only one round. As the saying goes, what fight was he watching?

“Thanks to everyone that tuned in. You win some, and you lose some,” said Fox. “Life in a nutshell. We gonna take this experience back home and be back better than ever.”

Santamaria grew up in East Los Angeles and was fighting in his backyard. He showed no fear of the much taller opponent and improved his record to 11-1-1. Most of his pro fights took place in Mexico.

The local fighters are now 0-2 in come back fights from the virus shut down. Washington, D.C. native Marcus Bates took a loss on a TKO to Ra’eese Aleem.

Bates injured his right wrist late in the fight and ended the bout on his knees in agonizing pain. Bates fell to 11-2-1. His only two loses are to Aleem. Aleem improved to 17-0 and is in line for a title shot in the super bantamweight division.