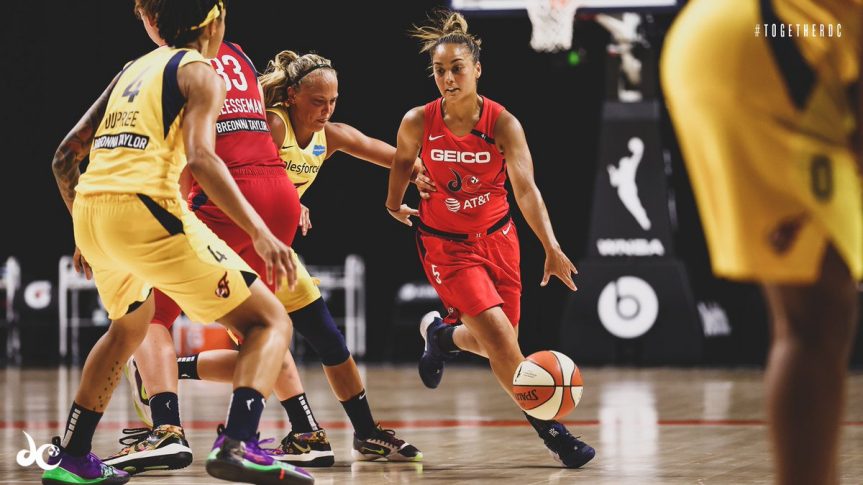 WASHINGTON — The Indiana Fever had five players score in double figures and a strong second-quarter performance to come away with a 91-84 win against the Washington Mystics on Sunday at IMG Academy in Florida.

Just as head coach Mike Thibault emphasized after the game, Washington won the first and fourth quarters, outscoring the Fever 28-25 and 27-21, respectively. Both teams scored 18 in the third quarter, but Indiana went on a 27-11 scoring run in the second – which proved to be the difference.

With their fourth loss in a row, the Mystics drop to 3-4 on the season.

“A really bad second quarter cost us the game. We won two quarters, tied one, but the second quarter was the killer for us,” Thibault said, reflecting on another tough loss. “We shot the ball terribly; we didn’t defend very well, and they (Indiana) ended up with five people in double figures.”

The Mystics had to play without one of their best shooters in Aerial Powers after she suffered a hard fall, injuring her right hip on Aug. 7 against the New York Liberty. They were able to trim the double-digit deficit, but not having Powers affected Washington, Thibault added.

“Kelsey Mitchell, for the second time in a row, really hurt us. Ariel (Atkins) getting in foul trouble early hurt us,” Thibault said. “Obviously not having Aerial Powers hurts, but we climbed back into the game and made it a game, but that’s a big hole to come out of.”

Thibault also highlighted that not having Natasha Cloud and Latoya Sanders – whom he called Washington’s best defenders – also hurts the team, especially against Indiana. Also missing was the much-needed length that Elena Delle Donne and Sanders provided in the lane. All three opted out of playing this season due to COVID-19.

Emma Meesseman led the Mystics early to give them a three-point lead approaching the second quarter. The 6-foot-4 forward scored 17 of her game-high 19 in the first half.

About two minutes into the second period, the Fever erased the deficit and took the lead, 33-31, after a triple by Kennedy Burke. The Mystics were able to reclaim the lead momentarily when Meeseman laid the ball up off an Ariel Atkins assist. However, Indiana responded by closing out the quarter on a blistering 18-4 scoring run.

Indiana guard Kelsey Mitchell put up 10 points in the second to lead the Fever’s offensive surge heading to halftime. Julie Allemand added six points, and Teaira McCowan scored five points as the Fever outrebounded the Mystics 15-7 while holding them to 3 of 18 shooting from the field to claim a cozy 52-39 lead at intermission.

After both squads traded 18 points in the third, the Fever still held a 13-point advantage.

Tianna Hawkins scored 11 points and added three rebounds in the fourth quarter to lead a Mystics comeback rally that was capped off by a 3-pointer by Kiara Leslie. It cut the deficit to four points, 75-71, with 3:47 remaining.

However, in the game’s final moments, the Fever converted on a few defensive stops and forced a turnover to secure the seven-point victory, improving to 3-4 this season.

Kelsey Mitchell finished with a game-high 29 points, McCowan recorded 15 points and 11 rebounds, and forward Tiffany Mitchell registered 14 points for Indiana. Allemand scored 14 points, and Candice Dupree added 10 of her own.

Washington will try to end its losing streak on Tuesday against the Minnesota Lynx, which will air on ESPN2 at 9 p.m.