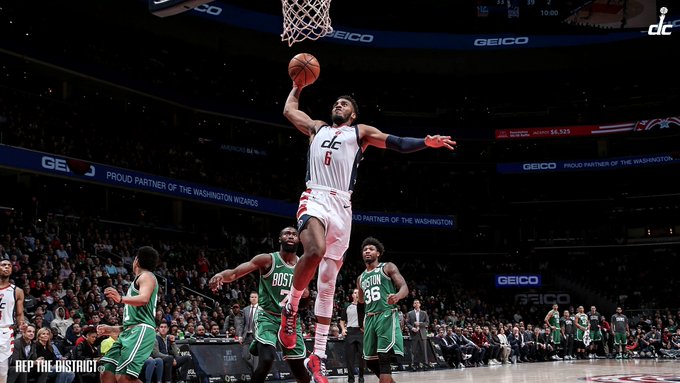 WASHINGTON – The Washington Wizards couldn’t keep up with the Oklahoma City Thunder in a 121-103 loss on Sunday.

Wizards guard Jerome Robinson scored a team-high 19 points while Thunder rookie forward Darius Bazley led all scorers with 23 points and seven rebounds. The Wizards remain the only winless team in the bubble.

Bazley’s career night came on an afternoon where the Thunder could do no wrong from buzzer to buzzer. A 10-0 run where Thunder forward Mike Muscala (13 points, four 3-pointers) knocked down two 3-pointers as well as its defense forcing the Wizards into an 0-7 start set the tone early. Washington never recovered.

“That physicality at the start of the game bothered us, put us back on our heels, and we played timid. You do that, it’s like blood in the water,” said Washington Wizards Head Coach Scott Brooks.

Thunder started center Steven Adams and forwarded Nerlens Noel did not play while nursing injuries on the sidelines.

With their top big man out of the contest, the Thunder relied on All-Star guard Chris Paul (13 points) to manipulate the Wizards defense with a game-high nine assists and imposed his will on defense with three steals and two blocks.

While the Thunder had six double-figure scorers, Washington struggled, shooting 41.3% from the field and 25% shooting from distance. Their worse output in the bubble.

The issue of Washington reacting to their opponent’s intensity instead of throwing the first punch has become the most consistent problem during bubble play.

Getting tonal consistency is essential as a professional, something Brooks had harped on, focusing on it at halftime and two-hours Saturday when Washington studied film for the Thunder.

“One of the things I talked about, I even talked about it at halftime today, we can’t keep making the same mistakes over and over,” Brooks said. “I said, ‘Either you’re not understanding that or I’m not doing a good job of explaining,’ and yesterday we just went through detail to detail. They got it. We came out flat tonight. Their length, their quickness, their toughness bothered us those first 10 minutes and set the tone.”

The closest that Washington got within the Thunder was early in the fourth quarter when wing Admiral Schofield hit a 3-pointer to cut the Thunder lead to 12 points.

Oklahoma City then responded with an 11-2 run, including a 3-pointer from Paul and a tip-in dunk from Diallo en route to a 103-83 lead.

Sunday alone, Troy Brown Jr. (12 points, eight rebounds) was able to draw valuable lessons from Paul on physicality and dictating the pace of a matchup and opponent.

These lessons will help Washington as they play Milwaukee on Tuesday and in the future next season when John Wall and Bradley Beal are presumably healthy.

The Wizards hope to get back to the playoffs for the first time since the 2017-2018 season, losing in the first round to the Toronto Raptors.