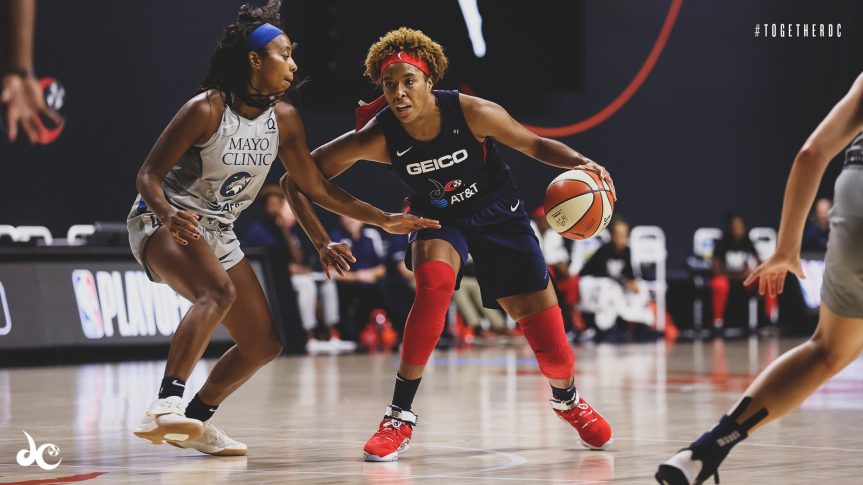 Mystics have not lost five-straight games since the 2016 season

WASHINGTON — For virtually the entire game, nothing went particularly well for the Washington Mystics in its blowout loss to the Minnesota Lynx on Tuesday night.

Forward Sylvia Fowles led the way with 16 points and 13 rebounds, guard Crystal Dangerfield scored 12 and had a team-high four assists, and the Mystics were held to 29.5% shooting as the Minnesota Lynx defeated Washington, 68-48.

In his postgame remarks, Washington Coach Mike Thibault pointed out that his team is trying to learn how to play faster but hasn’t entirely handled that task proficiently yet.

“That was just terrible basketball,” Thibault said after the game.

Washington forward Tianna Hawkins connected on a 3-pointer to begin the night, which seemed to be a good sign for the Mystics early. The Lynx came back and took a one-point lead, but the Mystics had control of the game until about the six-minute mark of the first quarter.

The Mystics’ biggest lead was 9-6 until Dangerfield made a long-ranged 3-pointer, then Damiris Dantas put in a smooth jumper to give the Lynx an 11-9 advantage that never relinquished.

Minnesota ended the quarter on a 12-2 run to take an 18-11 lead after the first. A solid rebounding effort and sustained attack on offense helped the Lynx inflate their lead to 48-27 by halftime.

The Lynx had a 20-8 rebounding advantage over the Mystics, and Dangerfield was leading the way with 10 points by the break.

The Mystics seemed to have come alive in the third, outscoring Minnesota 17-4 to trim their deficit to 52-44. They made 3-of-6 shots from long range and outrebounded the Lynx by five.

To close out the game, however, Washington couldn’t generate much offense.

Fowles scored six fourth-quarter points, and the Lynx thwarted the Mystics’ comeback attempt, holding them to only four points on 2-of-19 shooting (10.5%) sailing to the comfortable win. Rachel Banham poured in 10 points and three assists for the Lynx.

Minnesota moves to 6-2 on the season as the Mystics drop to 3-5, suffering their fifth-straight loss.

Hawkins, who started in place of Aerial Powers (out with hip injury), scored 10 points to go with six boards and three assists. Myisha Hines-Allen led Washington with 12 points and six rebounds while Emma Meesseman chipped in with 10 points.

“We just got to figure out how we can play together and keep the ball moving,” Hawkins said of Washington’s offensive struggles Tuesday night.

“We got a lot of things that we got to figure out, got to regroup, and just be better next game.”

Next, the Mystics will try to get back on track when they face the Los Angeles Sparks on Thursday at 7.pm. on ESPN.