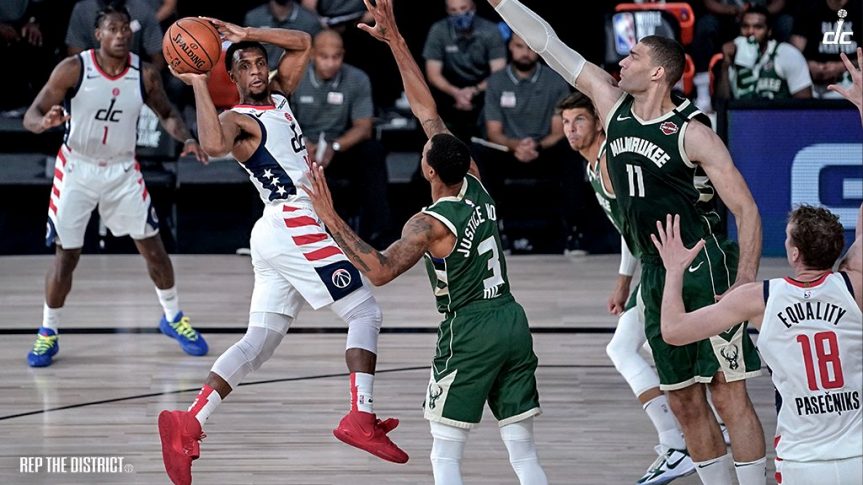 WASHINGTON – The Washington Wizards penultimate contest in the Orlando bubble ended in a seventh-straight loss to the Milwaukee Bucks, 126-113.

“It was a learning experience for us.” Washington Wizards Head Coach Scott Brooks said. “Even though we didn’t win, I thought we competed, we had a chance to cut it to 10 a few times and just could not make the timely three, and it seems like every time we could not make it they came down and hit a timely three.”

The reigning MVP and the second-year forward minced no words when they talked towards their huddle during a review of the offensive fouls when Antetokounmpo headbutted Wagner as they crossed paths.

The action drew a flagrant foul (2) and resulting in Antetokounmpo getting ejected after playing 10 minutes and tallying 12 points and nine rebounds.

Smith said the tension between the two might have boiled over from their February contest when the two were battling it out in the paint. Smith went on to play peacemaker stating he didn’t think much of it and that “it’s just basketball” at the end of the day.

“Giannis brings the juice; Mo brings the juice,” Smith said. “They love their money, so I don’t think either of them was going to throw their hands. A little rah-rah love back and forth. They are both guys that play hard and are edgy and sometimes your emotions run high.”

Brooks went a little bit further with his sentiments, saying the incident was unfortunate but that there is “no place for that” in the league, toeing the line between protecting his players and remaining respectful towards Antetokounmpo as one of the NBA’s best players.

The exciting sequence led to the Wizards being able to draw within four after Smith fed Robinson for a 3-pointer. The Bucks then responded with a 13-3 run and brought the deficit back to double-digits off of two straight triples from Lopez and Brown, giving the Bucks a 15-point lead with a 3-pointer of his own.

The Bucks were able to build their lead to as large as 22 when Antetokounmpo’s younger brother, forward Thanasis, threw down a two-handed dunk to counter Anžejs Pasečņiks’ dunk off a cut in the paint he made. The Wizards got as close as 12 points when Hachimura knocked down a pull-up jumper with 5:05 left on the clock.

However, Brown kept the Wizards at bay with a finger-roll layup, and the Bucks built the lead back to as large as 17 as the two Eastern conference foes put their garbage time lineups and exchanged their last points, fouls, and pleasantries. The Wizards have one more chance to notch a win in their belt when they play the Boston Celtics, Friday.

Off the court, we’ve had a good time of really getting to know one another and bond and learn about each other during some tough times in the world right now.”