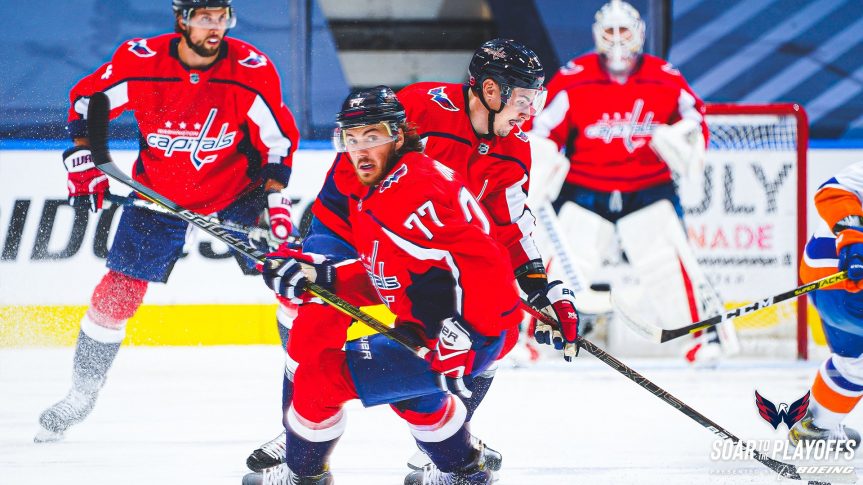 WASHINGTON — After clinching the No. 3 seed in the Eastern Conference round robin tournament, the Washington Capitals entered the first round of the 2020 Stanley Cup Playoffs against the No. 6-seeded division rival New York Islanders, on Wednesday afternoon.

Though the Caps led 2-0 late in the second period, they fell apart when the Islanders scored four unanswered goals the rest of the way to take Game 1 by the count of 4-2.

“We weren’t mentally sharp there,” said Washington winger T.J. Oshie. “It’s a tough reminder that playoff hockey is here, and we have to be ready to play for the whole 60.”

The first period may have epitomized what this series will include: physical hockey, featuring tough defense, hard checking, and tons of fights.

One of the biggest headlines of this game was Capitals center Nicklas Bäckström leaving the game after the first period, where he took a huge hit from New York winger Anders Lee.

Nevertheless, Washington scored on the power play with 14:33 remaining in the second period. Capitals center Evgeny Kuznetsov’s shot attempt bounced off Islanders center Mathew Barzal’s skate, into the wall, and towards Oshie, who snuck the puck past New York (and former Washington) goalie Semyon Varlamov.

Then, with 8:42 left in the second period, Oshie added his second tally on the power play, as he was able to tip the puck through Varlamov’s legs and into the net.

However, New York cut the deficit to one goal with more than a minute left when Jordan Eberle fired a shot from the high slot past Holtby.

“[The] First goal obviously can’t go in,” said Holtby. “I haven’t seen a replay of it yet, so I can’t really tell you too much.”

Then, within the first minute of the third period, the momentum quickly shifted in the Islanders’ favor as Lee got a lucky bounce off of Holtby and tied the game at 2-2.

From that moment on, New York then added two more goals to cement the decision, as Josh Bailey scored a shorthanded goal to give his team the lead, while Anthony Beauvillier added the fourth tally off a lucky bounce.

Capitals defenseman John Carlson was back in the lineup and had two assists, but that didn’t help much as the defense looked abysmal, especially during the Isles’ four-goal run.

In net, while Holtby did make 23 saves, he could have easily prevented the two tying goals that changed the course of the game.

Meanwhile, on the New York side of the house, Bailey and Brock Nelson both had two assists, while Varlamov made 24 stops on 26 shots.

The last time the Capitals faced the Islanders in the postseason was also in the first round during the 2015 campaign, where Washington won the series in seven, so while this is only Game 1, hope is not lost.

Game 2 between the two Metropolitan Division rivals will take place on Friday.