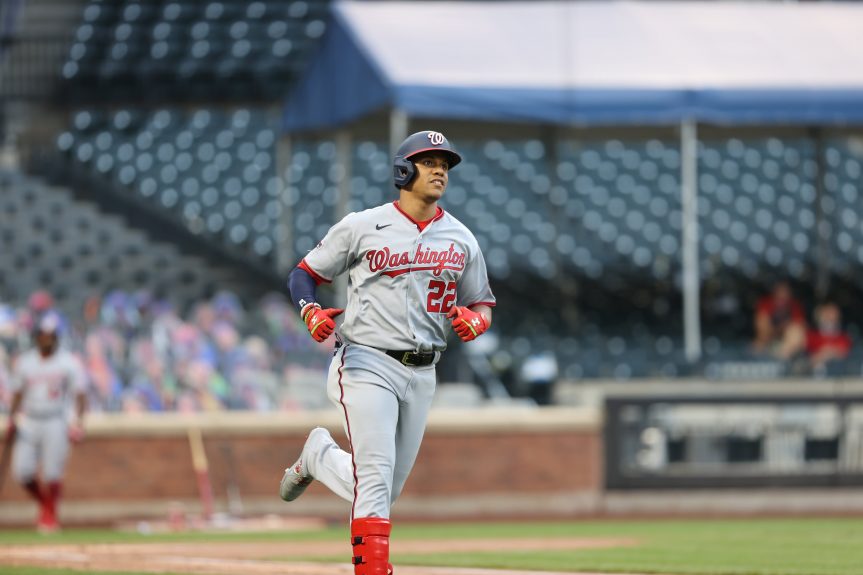 WASHINGTON – Entering the week with a 4-5 record, the Washington Nationals were scheduled to face off against their regional rival, Baltimore Orioles, and NL East divisional foe, New York Mets.

The combination of inconsistent hitting and struggles on the mound contributed to the Nationals winning two of their six games during the week.

Neither pitching nor the offense got it going for the Nationals in their 11-0 blowout loss against the Orioles. Aníbal Sánchez took the hill falling to an early deficit, allowing a run in the first and second inning. The game broke open for the Orioles in the sixth and seventh innings when the team scored a combined seven runs.

Sánchez left the game with a line of 5.1 innings, five runs, 10 hits, and four strikeouts. After the game, manager Dave Martinez said that Sanchez’s struggles came from pitching high in the zone.

The Nationals bullpen, which had allowed six earned runs all season heading into Friday’s contest, doubled their season total in the defeat.

Compiling just four hits as a team, the Nationals lone glimmer of optimism came from Starlin Castro’s two hits, as he recorded his fourth multi-hit game of the year.

Following their largest-deficit defeat of the young season, the Nationals jumped to an early lead with a second-inning home run by Juan Soto.

The Nats scored later that inning on a sacrifice fly by Kurt Suzuki and again in the sixth inning on an RBI double by Eric Thames. Leading 3-0 heading into the eighth inning, the Nationals bullpen imploded with struggles by Sean Doolittle and Daniel Hudson, who allowed a combined three home runs.

Following the bullpen collapse, the online backlash pushed Doolittle, who has been active in using his voice on social media, to delete his Twitter account. “I feel terrible. I’m letting the team down,” said Doolittle after the game.

Set for the series finale on Sunday afternoon, the Nationals and Orioles went into the sixth inning before the combination of a rainstorm and the ground crew’s struggles to cover the field with a tarp, pushed the game to a delay.

Before the delay, the Orioles were leading 5-2 in the top of the fifth inning. Both teams will resume play on Friday, August 14, at 5:05 p.m. in Baltimore.

For the first time all season, the Nationals traveled outside of Washington, D.C., as they took on the New York Mets in a four-game series.

The offense clicked on all cylinders for the Nationals, with a four-run third inning and a seven-run fifth inning. They scored the first 14 runs in the game, led by three-hit games by Trea Turner and Juan Soto; each homered in the game. Asdrúbal Cabrera homered twice and drove in five runs in his four-hit affair.

Given plenty of run support, Patrick Corbin gave the Nationals a quality start on the mound, allowing only two runs over six innings.

With the team playing at a road ballpark for the first time all year, Nationals manager Dave Martinez said, “Sometimes it’s good to try and get away and do something different. I felt that tonight with these guys. We showed up.”

The momentum for the Nationals offense carried over from Monday at the team jumped to an early lead on a first-inning leadoff home run by Trea Turner. Victor Robles extended the lead to 2-0 on an RBI single in the second.

Those early runs were all the offense needed behind Max Scherzer, who had made his first start since leaving the game after one inning with a tweaked hamstring on August 5. Scherzer appeared in his ace form, allowing just one run over six innings, while striking out seven, earning his first win of the season. Daniel Hudson picked up his third save of the year.

Juan Soto got the offense going with a 466-foot three-run home run in the first inning, the longest dinger of his career. The Nationals early start was no match for the Mets, who countered with four runs in the bottom of the inning and another run in the third.

Soto cut the lead to 5-4 with a solo home run in the sixth inning before the Mets broke open with a five-run inning. Starlin Castro and Kurt Suzuki contributed home runs late in the game, but it was not enough to keep up with the Mets bats.

Aníbal Sánchez took the loss for Washington, moving his record to 0-3 for the season with a 9.69 ERA.

Closing out the series in New York, the Nationals continued a streak of scoring in the first inning for the third consecutive game.

The team loaded the bases without recording an out to begin the game before a Howie Kendrick RBI groundout drove in Trea Turner.

After an early lead, the Nationals bats went cold, with their only other run coming off a solo home run by Juan Soto in the sixth inning. That was his fifth home run of the season and his fourth of the series in New York.

Austin Voth took the loss for Washington, posting a line of four innings pitched, with three runs allowed on six hits. Nationals manager Dave Martinez had hoped Voth could go deeper into the game, saying, “Eighty-seven pitches in four innings — that’s a lot. We’ve got to get him through five or six innings.”

Losing five of their last seven games, the Nationals (6-9) will travel to Baltimore tonight to conclude their game from August 9, where the Orioles were leading 5-2.

The two teams will then continue with their regularly scheduled three-game series. Following the weekend, the Nationals will travel to Atlanta for a three-game series with the Braves, who own an 11-9 record on the year.