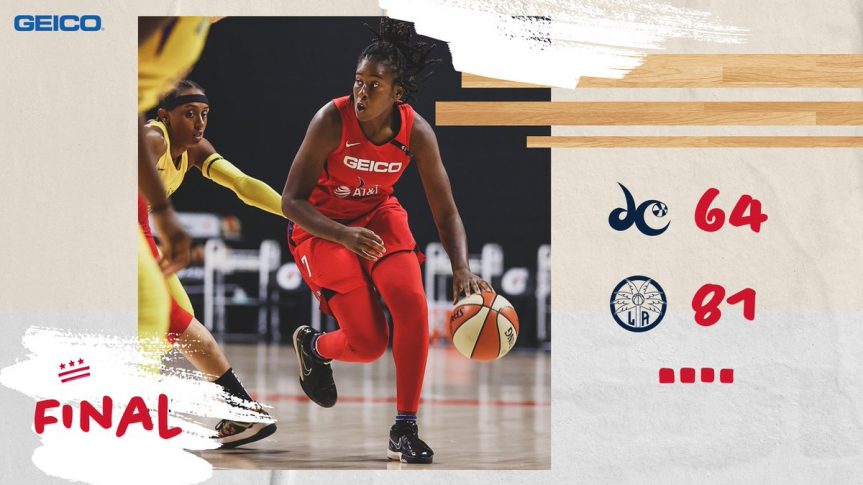 WASHINGTON – The Los Angeles Sparks posted a balanced offensive effort and maintained a staunch defense to top the Washington Mystics, 81-64, on Thursday night.

The Mystics held star forward Candace Parker to only 6 points on 25% shooting, but five other Sparks scored in double figures. Riquna Williams led the way off the bench with 13 points while Nneka Ogwumike scored 12 points and collected five rebounds for the Sparks.

Los Angeles notches its third straight win and improves to 6-3 on the season as the Mystics (3-6) drop their sixth straight with another sizable loss.

Washington head coach Mike Thibault said his team had good moments defensively despite the loss. What hurt the Mystics was committing a season-high 22 turnovers and not responding well to Los Angeles’ aggression throughout the game, Thibault said.

“LA’s aggressiveness was good, our reaction to it was not so good, Thibault said. “I’m happy with how a couple of people played; Emma [Meesseman] rebounded from a poor first half to a good second half, and Ariel Atkins was good most of the game. But turnovers, that’s a huge difference in a game.”

The Mystics got off to a decent start, commanding the lead for the first six-and-a-half minutes of the first quarter. Shooting guard Ariel Atkins scored Washington’s first seven points, and Myisha Hines-Allen knocked down a 20-footer that gave the Mystics a 9-5 lead.

Chelsea Gray and Williams led the comeback charge as the Sparks went on a 14-0 scoring run that made it the 19-9 score. Entering the second quarter, Los Angeles was up by seven points and didn’t trail again for the rest of the night.

Atkins, who scored a game-high 20 points, said the Mystics had stronger showings against Los Angeles in the past and saw moments of improvement throughout their loss.

“We got to do a better job of defending and rebounding, but… I did see some glimpses of some good things we did out there,” she said. “Offensively, we did a better job spacing than we have these last few games.”

The Sparks outscored Washington 21-15 to take a double-digit lead at the half. By then, Los Angeles tallied 12 assists to Washington’s nine and was shooting better than 50% from the field.

For the most part, Washington and LA went blow-for-blow in the latter half of the game, but the Sparks’ ability to sustain defensive intensity enabled them to hold on to the comfortable lead. As a team, Los Angeles totaled 10 steals for the evening.

Washington trailed LA by 14 points (64-50) after the third quarter. Kristine Anigwe crashed the boards and put in a few easy baskets as the Sparks opened the fourth on a 13-6 scoring run to put the game out of reach.

Before the game, Washington signed rookie Stella Johnson after being issued an emergency hardship by the WNBA after multiple injuries dropped its roster number to less than 10 players. A day before signing with the Mystics, Johnson was waived by the Chicago Sky after appearing in four games.

Johnson, a Denville, New Jersey native, left Rider University as the women’s basketball program’s all-time leading scorer (2,167 career points), a two-time conference player of the year and went on to be selected 29th overall in the 2020 WNBA Draft by the Phoenix Mercury.

The 5-foot-10 guard played about five-and-a-half minutes and scored two points for Washington on Thursday.

The Mystics hope to rebound from this losing streak on Saturday when they square off against the Las Vegas Aces at noon on ESPN.