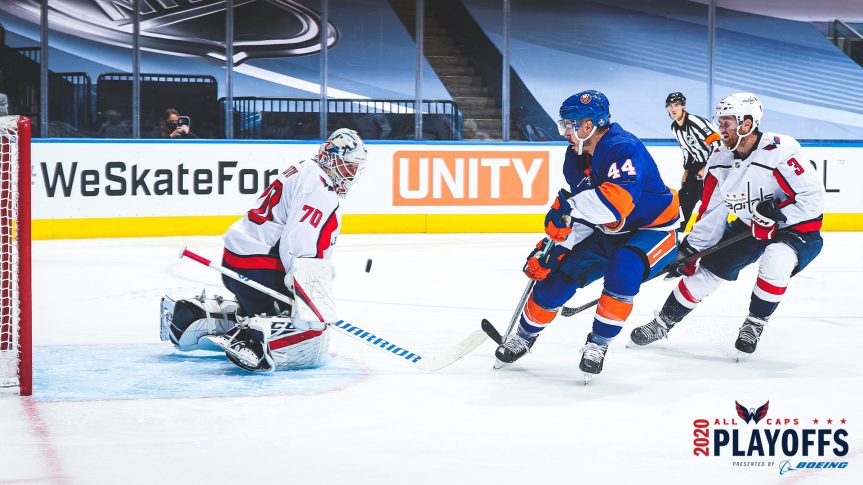 WASHINGTON – Having experienced a two-game deficit in a best-of-seven playoff series in the past, the Washington Capitals know what it takes to turn things around to win games and even win a Stanley Cup.

They looked poised to restart their postseason once again after tying the game in the second period against the New York Islanders on Sunday.

However, the Islanders pulled away once, this time with an overtime 2-1 win in Game Three of their Eastern Conference First Round series, putting the Capitals on the brink of elimination.

The Islanders struck first with 5:10 left in the first period when Anders Lee redirects Adam Pelech’s pass into the net.

Early in the second period, the Capitals responded as center Evgeny Kuznetsov fired a shot from the right circle for the power-play goal, tying the game.

Both goalies provided stellar performances for their respective teams as Washington’s Braden Holtby notched 32 saves, while New York’s Semyon Varlamov made 22. Their critical saves throughout the third period sent the contest into overtime.

Four minutes into the extra period, Washington had a brilliant opportunity to win it as Jakub Vrana stole a loose puck in the neutral zone, went on the breakaway and shot it towards goal. The puck rebounded off Varlamov, setting Vrana for a second opportunity, but it also missed the mark.

Twenty seconds later, Islanders center Mathew Barzal collected a pass behind the defense while staying onside, leaving himself in a 1-on-1 situation. He made a quick deke on Holtby before delivering a backhanded shot into the goal for the game-winner.

“Ultimately it’s their player executing a play and scoring a goal,” Washington head coach Todd Reirden said. “We had a chance right before that, and we don’t convert. That’s overtime hockey in the playoffs.”

In the series, Game Three was Washington’s most complete performance since they didn’t allow multiple goals in a strong defensive effort. New York dominated Washington offensively as they had more shots on goal, 34 to 23, and won 54% of the faceoffs.

New York’s overtime goal negated any goodwill gained, setting up a must-win situation for the Capitals in Game Four to keep their season alive.

“Obviously, our backs are against the wall,” Washington winger Tom Wilson said. “I expect a lot of guys to step up here, persevere through this, and we have a little adversity.”

The pressure is starting to mount Reirden. He is 4-9 with Washington in the playoffs and a loss away from being swept. He addressed any speculation about a possible coaching change, saying that he believes in the players to win Game Four on Tuesday and “seeing where that takes us from there.”

“Right now, we just have to focus on getting one win,” said Reirden. “One win, staying alive here, and keep moving forward.”