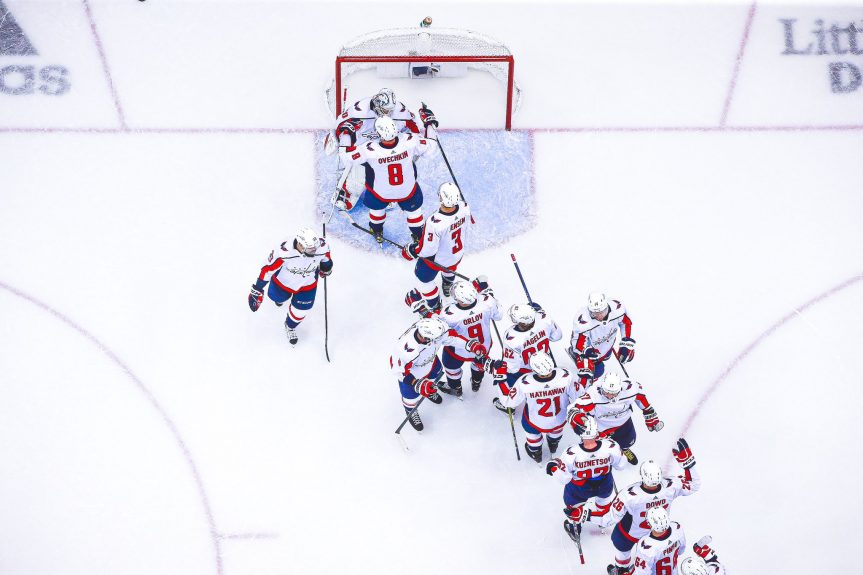 TORONTO — Down three games to none, it seemed like the Washington Capitals’ season was over. The team had failed to show up for most of this first-round series against the New York Islanders.

Then on Tuesday night, after an abysmal first period, Washington finally woke up and scored three unanswered goals the next two periods for the 3-2 victory in a win-or-go-home Game 4.

“We know if we play like that, we have a good chance at coming back,” said Capitals star captain Alexander Ovechkin. “But we’re going to take a game at a time.”

The first period summed up the first three games of the series as Washington gave up two goals from the Isles and were outshot 16-1 at one point.

New York’s first goal came three minutes and 50 seconds into the contest when Jean-Gabriel Pageau tipped in Scott Mayfield’s long shot attempt from the point for the 1-0 lead.

Then, the Islanders advanced on a 3-on-3, with Nick Leddy passing to Mathew Barzal in front of the net, who shot the puck past Capitals goalie Braden Holtby to go up 2-0 with 10:44 on the clock.

However, the second period showcased a much different Washington squad. Evgeny Kuznetsov skated with the puck near the boards in the offensive zone, then glided through three defenders toward the net and slid the puck underneath New York goaltender Semyon Varlamov to cut the deficit to 2-1.

“I think we just stopped thinking about those Corsi stats,” said Kuznetsov. “We just tried to play fun hockey and hold on to the puck. That’s how we always play.”

Then, on the power play, the momentum shifted in the Caps’ favor when Ovechkin fired a one-timer from the left circle into the net to tie the game at 2-2 with 14:31 left in the middle frame.

Washington continued to keep hope alive three minutes and 40 seconds into the third period when Ovechkin carried the puck into the offensive zone and fired away for his second tally of the game and his 69th career playoff goal to give his team the lead.

The Caps defense also showed up in this game, as they pressured the Islanders hard, laid out 35 hits, and took the puck away 11 times.

Washington’s D and Holtby also stepped up when it mattered most in the last two minutes and prevented New York from tying the game, despite many chances the Isles had.

After allowing those two goals, Holtby prevented 24 shots from going in the net, while Varlamov notched 26 saves.

“It’s only a matter of doing it continuously once every three or four shifts,” said Capitals head coach Todd Reirden. “You have to string together some shifts to create momentum.”

Washington has some history with erasing deficits by winning four consecutive games to win a series. Still, it’s tough this time around, as only four times has an NHL team overcome a 3-0 deficit in the playoffs.

With the win, Reirden’s job is safe for now, and the Capitals live to see another day, as they will play Game 5 against the Islanders on Thursday.