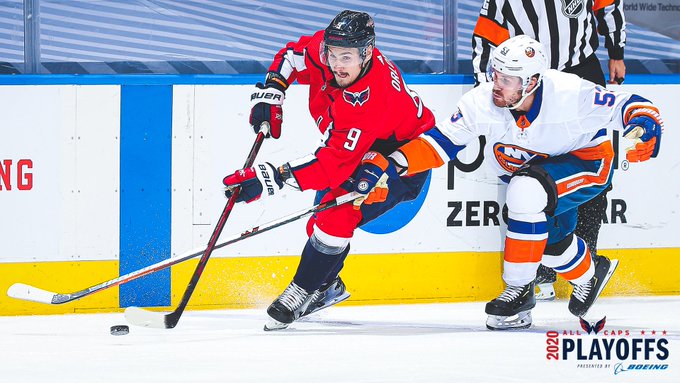 WASHINGTON — Facing elimination on Aug. 18, the Washington Capitals relentlessly kept hope alive by showing up in the last two periods to beat the New York Islanders in Game 4.

But on Thursday night, we saw the same lifeless Caps team that failed to show up in the first three games as they were shut out 4-0 by the Islanders in Game 5, ending their season.

“I think over these five games, they wanted it more than us,” said Washington center Nicklas Bäckström. “You can see that, overall. They were more disciplined than us, too.”

To make matters worse, the Capitals were eliminated by New York head coach Barry Trotz, who led Washington to their first Stanley Cup in 2018, but was let go after that season in favor of Todd Reirden.

Islanders winger Anthony Anthony Beauvillier scored the first two goals of this game. The first on a one-timer from the right circle into an open net in the first period, then he made a deke move and scored on a backhanded goal against Washington goalie Braden Holtby on the second tally.

The Caps shot the puck 21 times in this game but were unsuccessful in getting any past New York’s Semyon Varlamov, as the former Washington goalie stopped all 21 shots.

Late in the contest, with Holtby pulled, the Isles were able to register two empty-net goals, courtesy of Nick Leddy and Josh Bailey, that sealed the series once and for all.

“Just disappointed,” said Holtby. “It’s never a fun thing to go through. It’s more frustrating for us that we had more to give, and we couldn’t find a way to do it.”

While Holtby made 13 saves, this may have also been the last game with the franchise goaltender in a Caps uniform, as his contract is up, and he will be a free agent.

“Certainly a chance it is, but who knows,” Holtby stated on whether or not he just played his last game for Washington. “You live one day at a time and go from there.”

As for Reirden, this could have been his last game being the Capitals head coach as his postseason record is now 4-8 with his team eliminated from the first round for the second year in a row after winning the Cup with Trotz in 2018.

“We weren’t able to find the game that gives us the best success,” said Reirden. “It’s important that we step away and reassess everything because this is not acceptable for the organization.”

In this five-game series, Alex Ovechkin, Evgeny Kuznetsov, and T.J. Oshie were the only Washington players who brought additions to the scoreboard. Even crazier, Ovechkin was the only player on the team who scored at even strength.

“Every time you lose a series, it’s tough,” said Ovechkin, who has been through postseason disappointment before. “But we stick with what we did previous games, and obviously, it cost us the series.”

The Capitals, who finished the regular season 41-20-8 atop the Metropolitan Division, will possibly have to undergo a rebuilding process over the offseason as their time in the Toronto bubble is over.