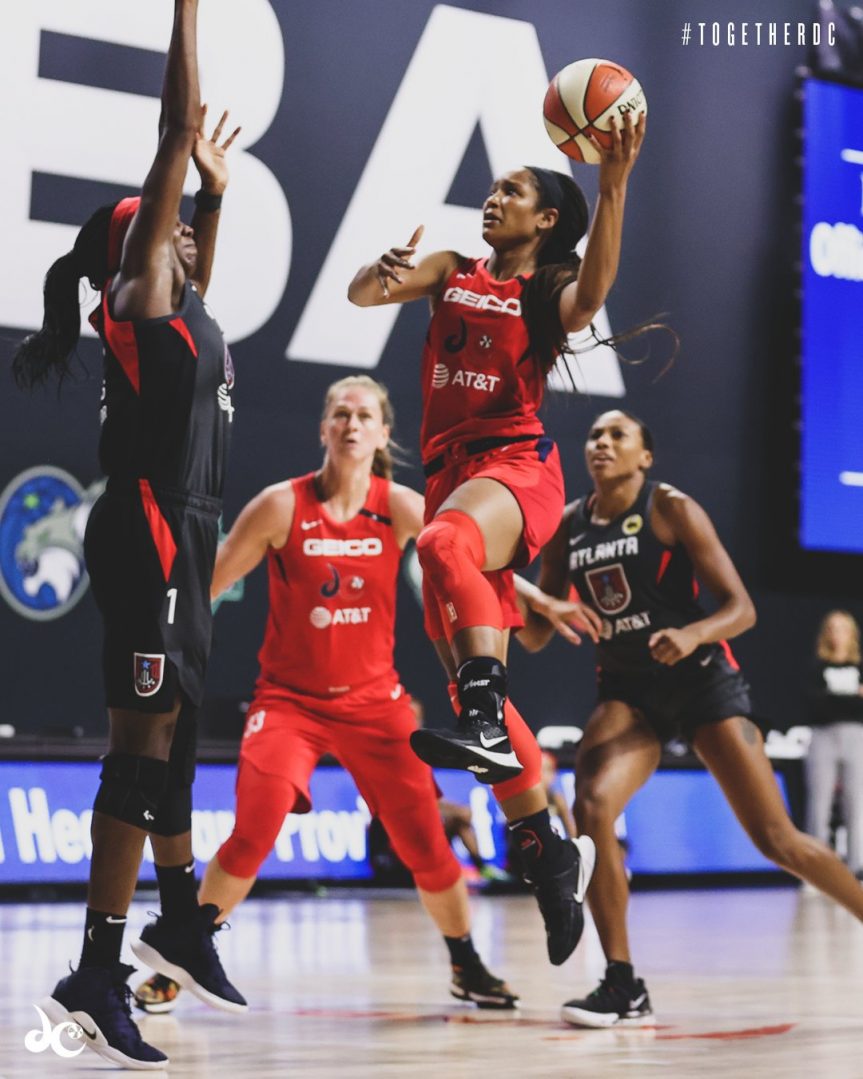 The rookie guard undertook the starting role over Tianna Hawkins and set a franchise rookie record with six made 3-pointers to finish with a team-high 25 points. Myisha Hines-Allen added 23 points to lift the Washington Mystics to 98-91 win over the Atlanta Dream on Wednesday night.

Furthermore, all five Mystics starters scored in double figures and combined for 24 assists to pick up the much-needed victory.

“For us to have five people in double figures again feels great,” Washington Mystics Head Coach Mike Thibault said. “Courtney Williams and Betnijah Laney put on a show for them (Dream). And they made some tough shots with our hand in their faces, but ultimately we did a good job for the most part on the boards [and] got ourselves to the free-throw line.”

Leilani Mitchell paced the Mystics early on with five quick points to give them a 5-0 lead within the first minute of action. A few possessions later, Hines-Allen hit a 3, a put-back lay-in and a driving layup, and Emma Meesseman got involved offensively to keep Washington on top.

Betnijah Laney and Courtney Williams were big for the Dream down the stretch, combining for 13 points to help their squad rally back and take a 24-22 lead after the first quarter.

Washington used the second and third quarters to reclaim and extend its lead, outsourcing Atlanta 53-39 in that 20-minute frame. The Mystics capitalized on Dream’s 11 first-half turnovers, and Johnson came alive in the second to give them the boost they needed to stay ahead for the rest of the night.

“It’s nice to see a young player come in who is not afraid and was poised. Even though she shot an airball early, it didn’t deter her, so I’m thrilled with the fun that they had playing with each other tonight.”

Johnson, the NCAA’s leading scorer last season for Rider University, began the game with an airball and was scoreless in the first quarter on 0-of-2 shooting.

For a two-and-a-half-minute span in the second, the 5-foot-10 guard scored 12-straight points to bring Washington from a 28-26 deficit to a 38-32 advantage. From that point, the Mystics didn’t relinquish their lead.

At first, Johnson was a little hesitant, but with Thibault and her teammates’ encouragement, she found her rhythm.

“I know I kept hesitating when I was shooting the ball, and I heard coach Thibault say ‘stop hesitating,’ so I just shot it without thinking,” she said, adding that as time went on, “I started to loosen up a little more.”

Washington opened the second half with high energy, going on an 11-4 scoring run to force an Atlanta timeout. Hines-Allen scored 10 in the third and Johnson added eight points to give Washington a double-digit cushion, 75-63, entering the fourth.

The Dream attempted a late-game comeback rally, led by Laney and Williams, but fell short due to Washington’s steady free-throw shooting.

Meesseman finished with 12 points, 10 assists and six rebounds, Ariel Atkins scored 13, and Mitchell tallied 12 points and six assists as the Mystics improve to 4-7 on the season.

Next, Washington will take on the Dallas Wings on Friday at 8 p.m.

As the Washington Mystics have dealt with the absence of key players due to medical conditions and injuries, the organization announced the acquisition of Alecia “Sug” Sutton on Aug. 16 and guard Jacki Gemelos on Aug. 19.

Gemelos, a six-footer who was a 31st overall pick in the 2012 draft, was recently released by the Connecticut Sun before being picked up by Washington on a seven-day contract.

Conversely, the Sun signed Essence Carson shortly after the Mystics waived her. In 10 appearances for the Mystics this season, Carson averaged 4.3 points, 1.8 rebounds and 16.8 minutes per game.

Gemelos, 31, was a USC standout and also had short stints with the Chicago Sky and Las Vegas Aces in her WNBA career.

Washington originally drafted Sutton with the 36th pick in the 2020 Draft from the University Texas before she was released on May 25. The 5-foot-8 guard was signed earlier this week as Washington also waived Shey Peddy, who has just signed with the Phoenix Mercury.