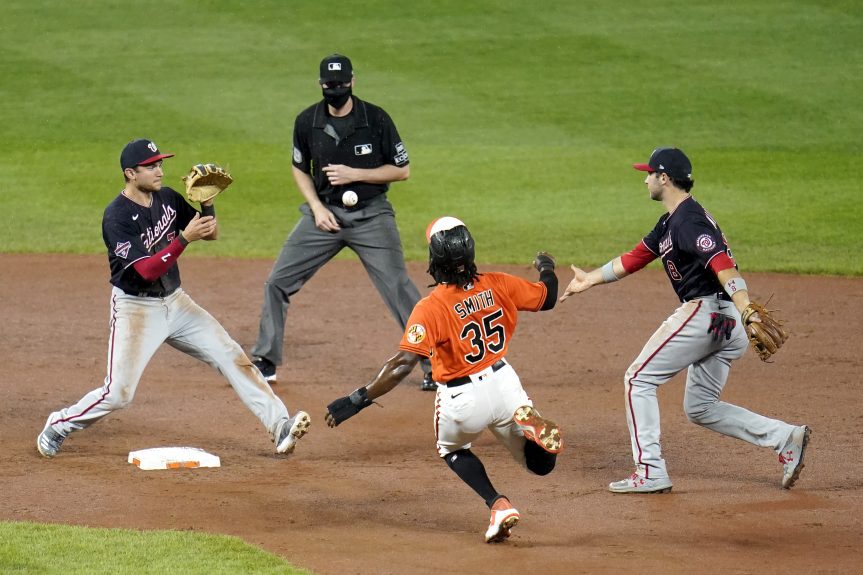 WASHINGTON – Reaching the quarter mark of the 60-game MLB season, the Washington Nationals entered the week with a 6-9 record, with a pair of road series appearances in Baltimore and Atlanta.

The Nationals spent the weekend facing off against the Orioles, first concluding a suspended game from August 9, before taking two out of a three-game set.

Washington then took on the Braves, splitting a pair of games before the series finale was postponed due to inclement weather.

Individually, Juan Soto earned NL Player of the Week honors. Through 13 games this season, he is batting .417 with seven home runs and 16 RBI.

Before rain and tarp issues at Nationals Park suspended play on Aug. 9, the Nationals were trailing the Orioles, 5-2, in the top of the fifth inning.

Both teams returned to play in Baltimore on Friday, where the Orioles added a run and held the Nationals’ bats to one hit in the game’s resumption.

After recovering from nerve issues in his pitching hand, Stephen Strasburg, who made his season debut, took the loss after he allowed five runs over 4.1 innings of work before the rain delay. Starlin Castro’s two-run home run served as the only offensive production to put the Nationals on the scoreboard.

Shortly after concluding their matchup from Aug. 9, the Nationals and Orioles took the field to open a three-game series. Stephen Strasburg took the hill, throwing just 16 pitches over 0.2 innings before an early exit with discomfort in his right hand.

The offense provided more than enough run support (15) as seven batters in the Nationals lineup had multi-hit games. Trea Turner had three hits, and Asdrúbal Cabrera slugged his fourth home run of the season.

After the game, Nationals manager Dave Martinez expressed concern over Strasburg’s early exit and revealed an interest in shutting down the star pitcher for precautionary purposes.

“This guy’s a big part of our future, and we don’t want to jeopardize anything at this point.”

Strasburg, who began the season on the shelf with nerve issues in his hand, went back on the 10-day injured list with carpal tunnel neuritis in his throwing hand.

Following a blowout victory over their regional rival, the Nationals fell to a slow start on Saturday. Patrick Corbin struggled out the gates for Washington, allowing two runs in each of the first two innings. He could not get it going in his losing effort, striking out just two batters over five innings, his lowest strikeout output in a start since May 2019.

“I wasn’t getting ahead of batters like I normally do,” said Corbin, who threw a first-pitch ball to five of his first six batters. “When you’re not doing that, you just put yourself in tough situations.”

A two-run home run by Juan Soto put the Nationals on the board in the fourth inning. Trea Turner, who led the way with three hits, hit a solo shot in the sixth inning.

In the rubber match of the three-game set in Baltimore, the Nationals jumped out to an early lead with their ace, Max Scherzer, on the mound.

Each of the first four Nationals batters reached base, as the team scored three runs in the first inning, forcing opposing pitcher John Means to exit before the end of the inning.

The Nationals tacked on two runs in the fifth inning and another run in the eighth as the table setters in the lineup, Trea Turner and Juan Soto, combined to score five of the Nationals’ six runs.

Those six runs proved enough for Scherzer, who earned the win, despite his struggles to keep the ball in the park. He allowed five runs on eight hits over seven innings while striking out 10 batters. All five runs allowed by Scherzer came from three home runs, the most long balls he has given up in a start since 2018.

“(Scherzer) made a couple of bad pitches, but other than that, he pitched well. He was good. He kept us in the ballgame,” said Martinez.

The bullpen threw two perfect innings to preserve the series victory, as Daniel Hudson earned his fourth save of the season.

After winning their first series since late July, the Nationals hoped their momentum would carry over to Atlanta, where they would take on their division rival, Braves, for a three-game set.

Luis Garcia put the Nationals on the board first, with a two-run home run in the second inning. That was his first career home run as he became the first player born in the 2000s to homer in an MLB game.

Later that inning, Eric Thames went deep for his first home run of the season. While the Braves countered with two runs in the bottom of the second inning, the Nationals led for much of the game as Asdrúbal Cabrera and Juan Soto also homered.

Struggles for the Nationals came in the ninth inning as the Braves tee’d off against Daniel Hudson. Hudson recorded just two outs in the inning, allowing four runs, including a walk-off home run to Dansby Swanson.

Hudson’s ERA more than doubled from 3.68 entering the game to 7.88 after the outing.

Starting pitcher Aníbal Sánchez did not get a decision in the game but posted his best start of the season, allowing three runs over five innings. He threw a season-high 99 pitches in the start.

Despite the loss, the historic home run from Luis Garcia was a reminder of the young talent on the Nationals roster, including Juan Soto (21), Carter Kieboom (22) and Victor Robles (23).

“It’s amazing to see a guy growing up and come up here and try to do the best,” said Soto. “It just feels really good…and now I feel a little old.”

After a crushing late-inning defeat to open the Atlanta series, the Nationals returned with a vengeance against the Braves.

Despite trailing 5-2 in the middle innings, the team mustered four runs in the fifth inning in their comeback victory. Each batter in the lineup reached base as seven players had multiple hits in the game in the eight-run, 17-hit outpour for the Nationals. Luis Garcia led the team with three base hits.

Austin Voth struggled in his start, allowing five runs over four innings, but his bullpen picked him up. Seven Nationals relievers maintained the lead after tossing five scoreless frames. Victor Robles helped the Nationals preserve the lead with his defense, making a home-run robbing catch on an Austin Riley fly ball.

“Games that are close like that, you put guys in situations where you think they’re going to succeed. Those guys did really well, and I’m proud of all those guys,” said Martinez after the game.

Rain in Atlanta prevented the Nationals and the Braves from taking the field on Friday for the series rubber game. The game will be made up in the form of a doubleheader in Atlanta on Sept. 4 at 4:10 pm ET.

Going 3-2 for the week, not including their makeup game from Aug. 9, the Nationals (9-12) are still sitting at the bottom of the NL East standings, but trail the top spot by just three games.

They will look to close the gap in the standings facing off on the road against the Miami Marlins for three games before returning home for a three-game set against the Philadelphia Phillies.