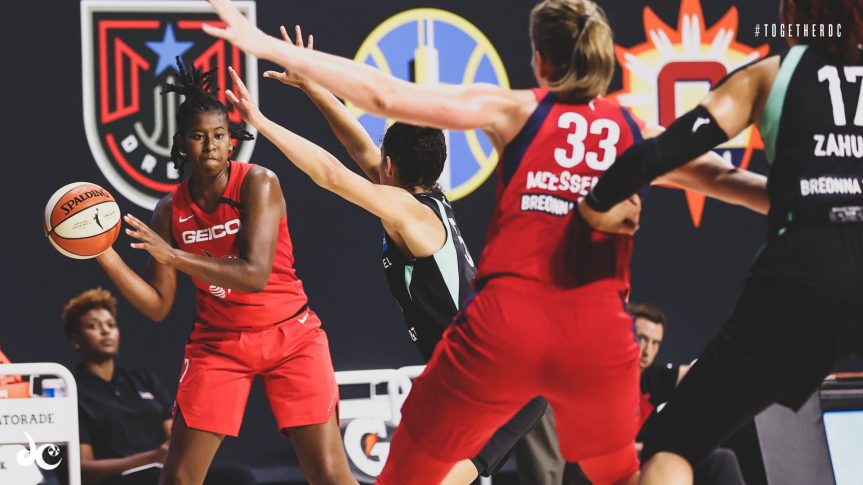 WASHINGTON – The Washington Mystics posted one of the greatest comeback efforts this WNBA season against the Dallas Wings on Friday. As forward Myisha Hines-Allen recorded a career-high 35 points along with 12 rebounds and three assists, the Mystics rallied back from a 23-point deficit in the third quarter to tie the game at the end of regulation.

However, the Wings forced four turnovers and outscored Washington 13-4 in overtime to come away with a hard-fought 101-92 win.

“It’s a shame that the great effort that got us back in the game, and we couldn’t finish it off,” Coach Mike Thibault said after another disheartening single-digit loss.

Washington completed a 25-point turnaround as they fought back from a 65-42 deficit to an 88-86 lead thanks to its “sensational” second-half defense, Thibault said.

“There were certainly very many bright spots, but it’s just too bad we had to give ourselves a hole,” he said. “When you play with more effort, play with concentration and contest shots, and don’t make mistakes, you give yourself a chance to win. We just played crazy for long stretches of the first half on both ends of the court.”

Everything seemed to click for the Wings in the first half; they obliterated Washington on the boards, 22-11, shot 56.2% from the field and used a staggering defense to build a 56-36 lead at halftime.

After Dallas won the tipoff, Mabrey, Ogunbowale and Thornton carried the team offensively. Katie Lou Samuelson knocked down a 3-pointer at the end of the first quarter that gave Dallas an 11-point lead. The momentum carried into halftime as Ogunbowale paced the Wings with 10 second-quarter points.

Harrison scored three quick buckets and Mabrey converted a 3-pointer to give Dallas its biggest lead of the night, 65-42, with 7:23 remaining in the third quarter. When Hines-Allen got going late in the period, the Mystics fed off that energy to fuel the comeback.

Hines-Allen went on a 13-point scoring surge for the last three-and-a-half minutes in the third, finishing the quarter with 17 total to bring Washington up to an 11-point deficit at the start of the fourth.

“I was just feeding off my teammates. When we’re able to get stops on the defensive end and push in transition and get whatever we wanted, that was just amazing. You just want to keep going at them, keep going at them,” Hines-Allen said of her explosive third quarter.

Washington continued chipping away at Dallas’s lead, opening the fourth on a 9-3 run before Harrison answered with a 19-foot jump shot to keep the Wings’ advantage at seven points. The Mystics responded with another run – outscoring the Wings 12-4 in a three-and-a-half-minute stretch to take their first lead of the night, 86-85, with 1:30 left in regulation.

Dallas’ Allisha Gray scored a field goal and a free throw, and Hines-Allen scored her 35th point on a layup to send the game into overtime.

In the extra period, Dallas held Washington to only one field goal, a 3-pointer by Ariel Atkins, with about 21 seconds remaining. By that point, the Wings had the win sealed due to an evenly spread offensive and defensive effort.

Washington made only 1 of 5 shots in overtime. Meanwhile, Dallas shot 3 of 7 from the field and 6 of 8 from the free-throw line to hold on.

They hope to bounce back when they take on the Phoenix Mercury on Sunday at 8 p.m.

It appears that Mystics guard Aerial Powers will be added to a growing list of premier Mystics players who will be out for the remainder of the season.

Powers injured her hamstring on Aug. 7 against the New York Liberty. Since then, she has not competed.

In a Thursday press conference, Thibault said that Powers is “probably not coming back” this season.

“She really wanted to try and come back and finish the last couple of weeks, but I think for her long-term health, there’s no point in risking that,” Thibault said. “I think she needs to start the healing process right now, and she’s got some structural issues that, not damage but structural issues that we can get to work on by getting her started with somebody right now.”

Washington has already dealt with the absence of Tina Charles, Elena Delle Donne, LaToya Sanders and Natasha Cloud due to either personal reasons, medical issues or injury.

And with Powers – one of the team’s best scorers – out for the second half of the regular season, the Mystics have an arduous task ahead as they strive to climb league standings for a strong finish this year to notch a playoff spot.