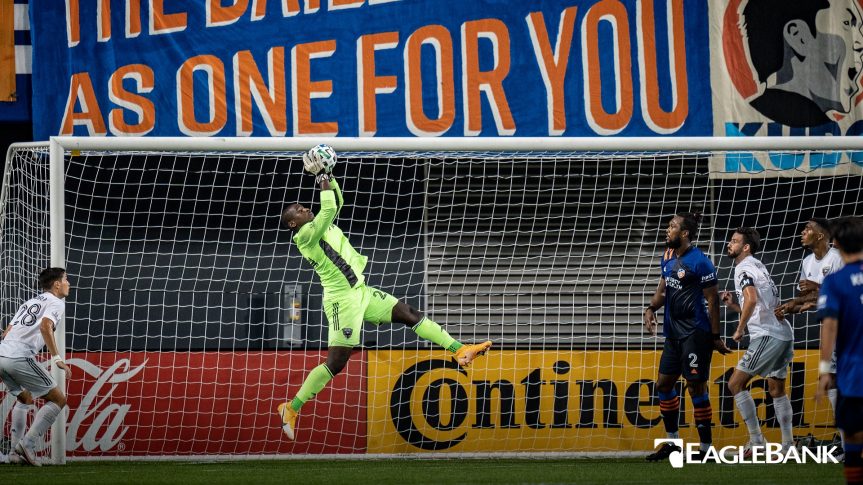 WASHINGTON – In their return to regular season play in Major League Soccer, D.C. United was able to get a point on the road after a scoreless draw against FC Cincinnati Friday night.

Despite being shut out for the second consecutive game, United head coach Ben Olsen said he was happy with the result. After being eliminated in the group stage of the MLS is Back Tournament, D.C. (1-2-3, 6 points), they needed a positive result as they prepared to play six matches in a month.

One thing Olsen and his players needed to get used to was playing in an empty stadium. Last month’s tournament, played in the ESPN Wide World of Sports Campus in Orlando, was played without fans, but teams quickly adjusted without stands surrounding the field. Now, Olsen said it was “strange” to play an empty Nippert Stadium.

“This was a strange atmosphere,” Olsen said. “Here you have these empty stadiums. It’s a little surreal, and it’s certainly not the way we all want to be playing the game. We love the energy and the pageantry of our surroundings.”

United made several changes to its lineup, including switching to a more attack-heavy formation against a defensively-sound Cincinnati team.

Starters like Edison Flores and Joseph Mora started on the bench or did not play respectively as part of the squad rotation Olsen implemented. United was also preparing for a home match against New England Revolution on Tuesday.

There were two surprise inclusions in United’s starting lineup tonight with the most noteworthy being homegrown product Kevin Paredes making in his first regular-season start. After adding a spark in the United attack off the bench in the MLS is Back Tournament, the 17-year-old midfielder looked to provide speed and creative play to United’s attack.

For the opening 15 minutes, United was in control with multiple opportunities on Cincinnati’s goal. In the seventh minute, a free kick from Julian Gressel connected with Pines, whose header directed the ball towards the goal defended by Przemysław Tytoń. The ball floated past the Polish goalkeeper but hit the post and out of play.

After being outshot 6-4 in the first half, Cincinnati (2-3-1, 7 points) created more goalscoring chances in the second half. Their best chance came in the 83rd minute when a pass from Alan Cruz past United’s backline to find Jürgen Locadia in a one-on-one situation with Hamid.

His shot flew past the D.C. goalkeeper, but the ball hit the crossbar, denying the Dutch striker the game-winner for The Orange and Blue.

The other surprise was the return of defender Donovan Pines, who struggled with a preseason injury to make his first start since last August.

The Centerville, Maryland native shined against Cincinnati, holding down the center of the defensive line and assisting United with its 20 clearances. Along with goalkeeper Bill Hamid’s two saves, Olsen credits Pines’ play for the draw.

“It’s been a really long, long season with everything, all the uncertainty and everything that’s going on, but you just need to stay positive, and you need to play the sport that we love and just focus on what we had to do so,” Pines said. “I wanted to show that I could play at this level again. And I’m happy that we got a result on the road today.”