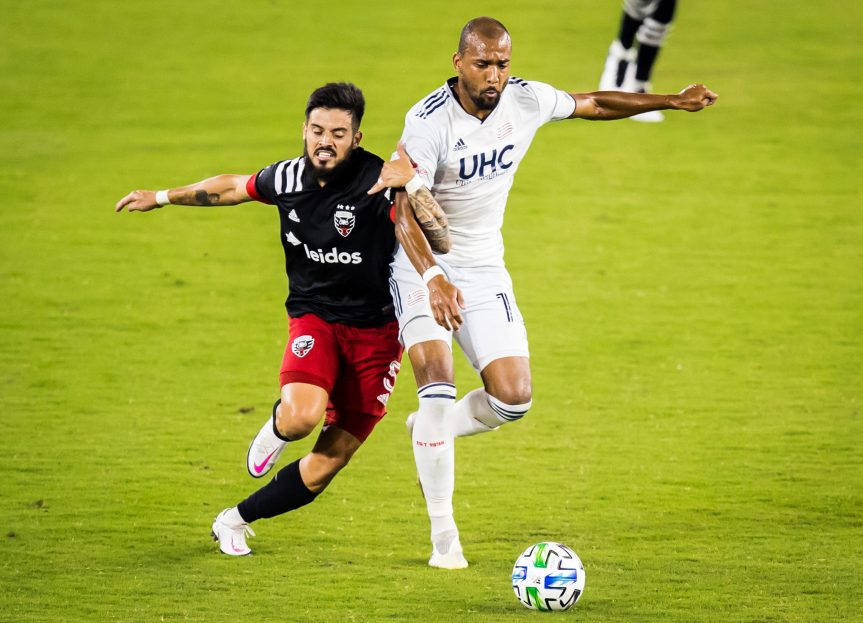 WASHINGTON – D.C. United last played in their home stadium Audi Field 172 days ago, in which they defeated expansion side Inter Miami FC 2-1.

It was also the last time United won a match.

In their first match back on their home ground, the Black-and-Red had its depth tested and could not spring forward its offense until its dying moments.

Despite playing the final 18 minutes up a man, D.C. United could not find their scoring touch, losing to the New England Revolution 2-1 Tuesday night.

The contest culminated United’s second loss in three matches in all competitions and its first since the start of regular-season games.

D.C. (1-3-3) is also now winless in its last five games. When asked about the team’s overall performance, D.C. United Head Coach Ben Olsen said it was all part of a “choppy night.”

United’s defense, one of the bright spots in previous seasons, has struggled with depth issues all year. D.C. was down two defenders heading into the New England game, with injuries to fullbacks Chris Odoi-Atsem and Oniel Fisher.

As United began gaining an offensive rhythm in the opening 15 minutes, midfielder Russell Canouse went down with a hamstring injury and needed to be subbed out. After playing 87 minutes in Cincinnati on Friday, defender Frédéric Brillant came in for the injured Canouse.

As United attended to Canouse’s injury, New England (2-1-4) regrouped after surrendering most of the possession and shot opportunities. Once the match restarted, the Revolution immediately began attacking Bill Hamid’s goal.

After United’s defense cleared out a corner kick attempt, New England midfielder Gustavo Bou retook possession of the ball away from Edison Flores. The Argentine then fired a right-footed, near-post shot past a diving Hamid for a Revolution goal.

After a 30-minute lightning delay, New England struck again with a cross by Alexander Büttner connected with a Teal Bunbury header to give the visitors a 2-0 lead.

“We shot ourselves in the foot a little bit from a conceding standpoint,” Olsen said. “We had many chances throughout that game to certainly get something out of the game, if not win the game.”

United’s offense woke up slightly in the second half with Felipe’s long-range shot that goalkeeper Matt Turner saved. But as they looked to advance further upfield, Flores, the team’s high-profile acquisition during the offseason, collided heads with Büttner going for a loose ball and needed help off the field.

Some luck came United’s way in the 70th minute as Büttner inadvertently handed the ball to block a shot. After being confirmed by the video assistant referee, striker Ola Kamara converted the spot kick to bring United within one goal.

With seven minutes remaining, and an additional 10 added on, United pressed forward in attack but could not convert opportunities to tie the game. Kamara had a chance in final minutes of regulation, firing a header towards the top left goal post. However, Turner slapped the ball away to keep the Revolution’s victory secured.

In his postgame press conference, Olsen said he does not believe Flores or Canouse will be available for their next match against the Philadelphia Union on Saturday due to their injuries. Meanwhile, Brillant may be questionable after being subbed out at the end of the game due to a foot injury.

The loss was a tough pill to swallow for Kevin Paredes.

“For me, it’s quite frustrating,” Paredes said after missing two chances to score. “…I know the rest of the guys are frustrated right now. Everyone had chances and everyone played well. Things happen in football but you got to look forward to the next game and take our chances.”

Olsen said he did see positives, including the improving play of 17-year-old Paredes and the connecting passes leading up to an attack. All that is missing are goals and wins, Olsen said.

“For 15 minutes, we had plenty of chances, but it is the same story of not seeing the play out, but we will keep going,” Olsen said. “The reality is from a soccer side, a tactical side, from identifying what we are standpoint, that is getting better. Every game it’s getting better, but what needs to be enhanced right now is our ability to win and be winners.”