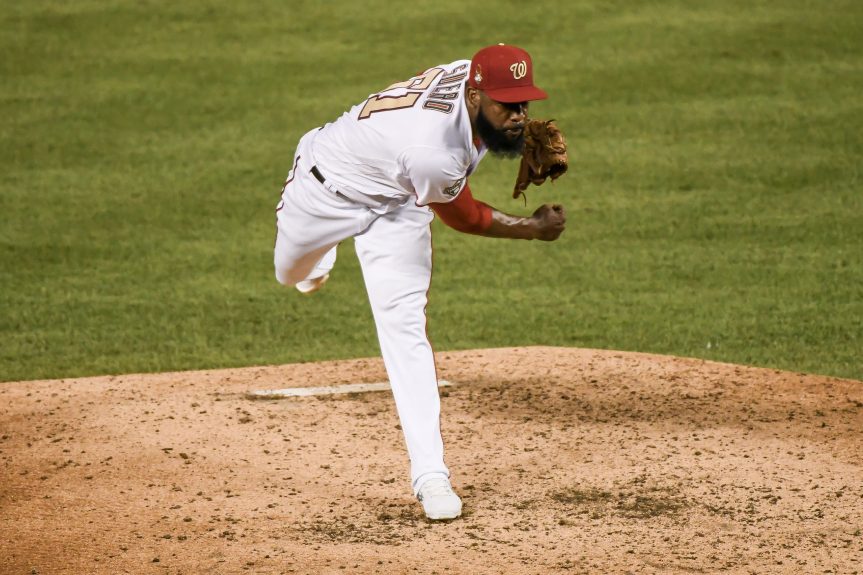 WASHINGTON – Sitting in fourth place in the NL East with a 9-12 record entering the week, the Nationals sought to cut the deficit, taking on division rivals, Miami Marlins and Philadelphia Phillies.

With the combination of the loss of their star pitcher (Stephen Strasburg) for the season and a losing streak to conclude the week, the defending champions fell further down the standings in the National League.

Opening the series at home against the Marlins, the Nationals jumped to an early deficit as Patrick Corbin surrendered a three-run home run to Miguel Rojas in the second inning.

Corbin settled down after that blemish, striking out nine batters over 6.1 innings of work. The Nationals bullpen limited the damage to one hit over 2.1 scoreless innings.

The Nationals offense came courtesy of the longball as Yan Gomes and Trea Turner homered in the game’s early innings. Gomes’ home run was his 100th of his career, as he became the first Brazilian-born player to reach that milestone at the Major League level.

After the game, manager Dave Martinez made it a point to focus on improving the offense for the next game. “We just have to come back tomorrow. Max Scherzer is pitching game one (of the doubleheader), so let’s score some runs for him.”

Making up games from last month that were postponed due to the COVID-19 outbreak in the Marlins’ clubhouse, the Nationals and Marlins spent Saturday with double-header baseball, partaking in a pair of seven-inning games.

Taking on the home team’s role in game one with their ace, Max Scherzer, on the hill, the Nationals struck early with the first five runs of the game through the first four innings of work. Josh Harrison led the team with two hits, while Trea Turner scored twice in the game.

Scherzer, who had not allowed a run through his first 4.2 innings of work, struggled to record the final out of the inning, surrendering four runs before Dave Martinez pulled the three-time Cy Young Award winner out of the game.

The Nationals bullpen pitched a perfect 2.1 innings of work to preserve the 5-4 lead as Daniel Hudson earned his sixth save of the year.

Despite playing the doubleheader twilight game in their home ballpark, the Nationals played the role of visitor against the Marlins. They had prospect, Sixto Sánchez, on the mound making his Major League debut.

The Nationals got on the board first with a solo home run by Yan Gomes in the second inning, but the Nationals answered back with two runs in the bottom of the inning. With the Nationals trailing 4-1 in the fifth inning, Victor Robles hit a two-run home run, but the offense was not enough for Washington in the seven-inning affair.

Wil Crowe, who made his MLB debut, took the loss on the mound for the Nationals, as he allowed four runs over 3.2 innings.

In addition to losing game two of the doubleheader, the Nationals also received news on Saturday that they would lose pitcher Stephen Strasburg for the season as intended to undergo surgery for carpal tunnel.

Speaking optimistically, manager Dave Martinez said, “The biggest thing is that surgery relieves anything he has, and he’s able to rehab next spring training. Long-term goal, that’s what we’re for.”

After splitting the doubleheader on Saturday, the Nationals bats came to life early on Sunday as the ballclub scored all nine of its runs by the fifth inning, capped off by a two-run triple by Trea Turner, who had a three-hit performance. Luis Garcia also had three hits in the game.

Aníbal Sánchez performed his best outing of the season, earning his first win of the year. He allowed just one run on five hits over seven innings.

“He was good. That’s That’s the Aníbal that I’ve I’ve known for a very long time,” said manager Dave Martinez. Sanchez, who had struggled to win a game over his first four starts of the year, tossed his longest outing of the season on Sunday.

Closing out a five-game stretch against each other, the Nationals and Marlins were scoreless through two innings.

The Marlins got on the board with a run in the third inning before breaking out for six runs in the fourth. The Nationals offense answered with three runs in the fifth inning, but the Marlins continued to answer back with a pair of runs in the seventh and eighth innings.

Adam Eaton drove a three-run home run over the right field wall in the eighth inning to cut the lead to 11-8, but the late rally was too little, too late for Washington.

“I loved the fact that we did not quit,” said manager Dave Martinez. “On the other hand, we gave up a bunch of runs. Our starting pitchers need to go deeper into games.”

Austin Voth picked up his third loss of the season, allowing six runs over 3.2 innings. He has yet to pitch beyond the fifth inning through his first five starts of the season.

After closing out their series with a blowing defeat to Miami, the Nationals hoped to turn the tide at home against the Philadelphia Phillies.

Trea Turner began the series with a bang hitting a leadoff home run to extend his hitting streak to 11 games. The Nationals lead in the game was short-lived as the Phillies responded with a four-run third inning.

A rain delay of just over an hour suspended play in the fifth inning. Resuming play, Adam Eaton homered in the sixth inning to cut the lead to 4-2 before the Phillies extended the deficit.

“The rain just got him, but I thought he did really well,” said Martinez, about Fedde, who pitched through the rain after 10 days of rest.

Attempting to prevent a three-game losing streak, the Nationals had their all-star pitcher Patrick Corbin take the hill against Phillies ace Aaron Nola.

Providing Corbin with an early lead, Juan Soto drove his team-leading eighth home run of the season in the second inning. With the game tied 1-1 in the fourth inning, the Nationals would regain the lead on an RBI single by Howie Kendrick.

The seventh inning served as the turning point in the game as the Phillies answered with two runs, capitalizing on defensive miscommunication in the Nationals outfield between Adam Eaton and Victor Robles.

Reliever Will Harris picked up the loss out of the bullpen, surrendering one run. Patrick Corbin tossed a quality start with a line of two runs allowed on seven hits over six innings of work.

Standing in solidarity with several other teams throughout the league, the Nationals and Phillies sat out Thursday’s contest in response to the shooting of Jacob Blake in Kenosha, WI, and the racial injustices in the country.

The Nationals released a statement that said, “We support their decision to call attention to the racial and social injustice that continues to exist in our country. We will continue to stand behind our players and those on the front lines working to generate accountability and real change in our society.”

The game will be rescheduled as a part of a doubleheader on Tuesday, September 22, at 3:05 p.m. ET.

Going 2-5 for the week, the Nationals are sitting at the bottom of the NL East standings, now trailing the first place Atlanta Braves by six games.

With the loss of Stephen Strasburg for the rest of the season coinciding with the team’s decline, the Nationals may turn to the seller’s role in the approaching trade deadline on August 31.

With their upcoming schedule, the Nationals will take on another team that will look to sell in the trade deadline, the Boston Red Sox, for a three-game series in Beantown. The Nationals will then travel to Philadelphia for four games against the Phillies.