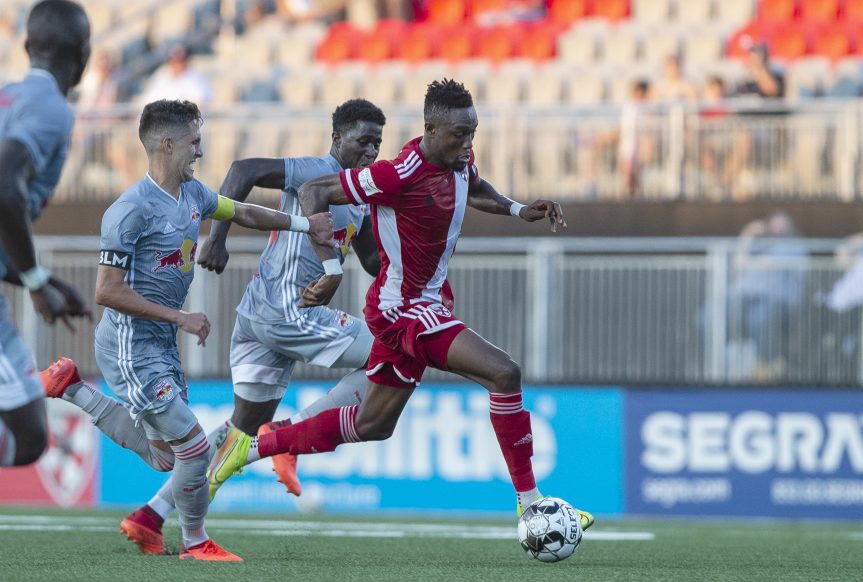 Despite two goals from striker Kairou Amoustapha, Loudoun United FC could not return to its winning ways, losing for the third time in four matches, as they fell to New York Red Bulls II, 3-2, Saturday night.

In front 512 fans at Segra Field, the Red Bulls (3-6-0, 9 points) took an early lead when Jake LaCava outran the Red-and-White’s defense in a counterattack before rifling a shot past goalkeeper Colin Miller for the opening goal.

New York almost took a two-goal lead when they were rewarded on a penalty kick, but Miller slapped the shot which hit the crossbar before grabbing the loose ball.

Amoustapha, a 19-year-old from Niger, cut inside the penalty area, running past a Red Bull defender, and hit a chipped shot over Wallis Lapsley to tie the game. However, LaCava ran across the penalty area before firing his second goal of the match, giving New York the lead three minutes before halftime.

Miller, who finished the match with nine saves, made multiple stops to start the second half to keep Loundon in the game. Those efforts were thwarted in the 56th minute when Caden Clark slipped a shot into the net to give the Red Bulls a two-goal advantage.

Loudoun (1-5-2, 5 points) responded 12 minutes in as Amoustapha collected a bouncing loose ball in the middle of the penalty area and fired a right-footed shot for his second goal of the game. Despite Loudoun winning the possession battle (61%-39%), New York had more shots on target (12-7) and more clinical in front of goal.

Loudoun’s next two matches will be on the road. They will face off against the Pittsburgh Riverhounds on Sept. 1, followed by Hartford Athletic on Sept. 5. Their next home match will take place on Sept. 12 against Philadelphia Union II.