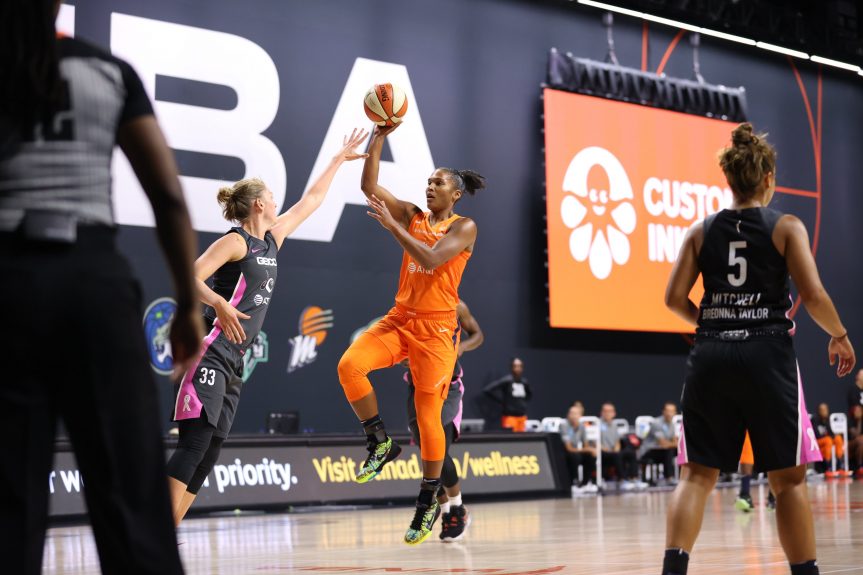 WASHINGTON – Led by DeWanna Bonner and Alyssa Thomas, the Connecticut Sun took control early and used a consistent inside presence to defeat the Washington Mystics, 76-63, on Sunday afternoon.

The Sun scored 36 points in the paint and 11 second-chance points. Bonner went from being scoreless in the first quarter to finishing with a game-high 20 points and 11 rebounds. Alyssa Thomas, also scoreless in the first quarter, recorded a double-double of her own, ending the game with 16 points and 11 rebounds to fuel Connecticut to the double-digit win.

When the Mystics faced off against the Sun earlier in the season on July 28, they won 94-89. Now, Washington drops to 4-11 on the season, suffering its fourth straight loss.

Two early triples by Kiara Leslie and a layup by Emma Meesseman gave the Mystics an 8-5 lead at the six-minute mark of the first quarter. It would be the last time they hold an advantage.

Essence Carson made two straight 3-pointers to put Connecticut on top, 11-8, and the Sun held on for the rest of the contest.

Carson, a veteran who was waived by Washington and subsequently picked up by the Sun about two weeks ago, scored all eight of her points in the first quarter, providing a huge spark for her team.

Rookie Kaila Charles scored a few baskets to help Connecticut enter the second quarter with a four-point lead. After Jacki Gemelos’ seven-footer trimmed the Mystics’ deficit to two, the Sun posted a 17-6 scoring run to take a 36-23 lead with just under three minutes remaining in the half.

Washington did well drawing fouls in the first half and converting 9 of 10 from the free-throw line. However, the Mystics shot 29.6% from the field, had about twice as many turnovers and half as many assists as Connecticut as they headed to the locker rooms trailing 39-28.

Myisha Hines-Allen said she felt the Mystics’ shot selection could have been better, ending the game with a 32.2% shooting percentage.

“It all just boils down to taking good shots, taking our shots, not rushing it. If we’re open just shoot the shot. I think that was the biggest thing today,” Hines-Allen said.

Meesseman led Washington with 11 first-half points and Charles, a former University of Maryland and Riverdale Baptist School standout, scored 12 of her career-high 16 points for Connecticut in the first half.

Thomas’ displayed efficiency in the mid-range and down low, totaling eight points in the third to pace the Sun, who led by as much as 20 points (57-37) with 3:20 left in the third quarter.

The Mystics scored six straight points and cut their deficit to 57-43 entering the fourth, but the Sun was able to match Washington’s offensive effort to maintain a double-digit cushion and seal the win.

After the loss, Washington head coach Mike Thibault said he expects his team to play with focus and energy for the last third of the regular season.

“We’ll watch film, we’ll do all the things we have to do and try to be a better basketball team,” Thibault said. “Hopefully, we’ll find some bright sports over the next two weeks.”

For the Mystics, Ariel Atkins and Meesseman scored 14 apiece and Hines-Allen had 12 points, pulled down 13 boards and added six assists. Leslie contributed with 11 points.

The Mystics will return to action on Wednesday at 10 p.m. against the Seattle Storm.