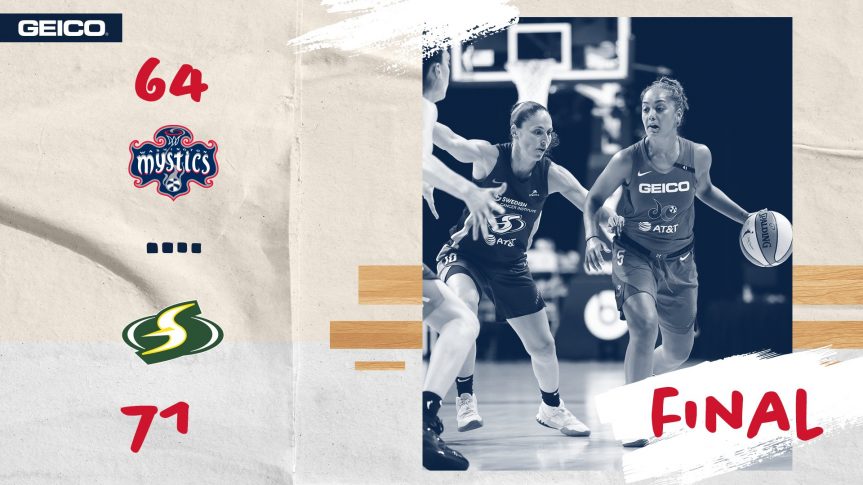 WASHINGTON — Despite a bad shooting night from both teams, the Seattle Storm was able to sustain a comfortable lead and used a sizable rebounding advantage to edge past the Mystics, 71-64, on Wednesday night.

Brenna Stewart scored 16 points and pulled down 14 boards while Natasha Howard and Jewell Loyd scored 13 apiece and combined for 12 rebounds as the top-ranked Storm outrebounded the Mystics 43-25 for 13 crucial second-chance points to notch their third straight victory.

For most of the game, Seattle held a double-digit lead, and Washington could get back to within five late in the fourth quarter. Emma Meesseman buried a jumper right after tipoff that gave the Mystics a 2-0 lead, then after Loyd responded with a 3-pointer on the other end, the Storm (14-3) didn’t trail for the rest of the evening.

The Mystics have now lost five-straight and fall to 4-12 on the season.
In contrast to their last matchup against Connecticut, Jacki Gemelos felt she and her team played with more intensity and togetherness against Seattle though the comeback rally fell short.

“The season’s not over yet. We still have a chance to make the playoffs,” Gemelos said. “We just gotta get some wins here, and I feel like we made a good statement tonight against the best team in the league.”

Over the course of the first quarter, Seattle got stops and converted on the offensive end, taking its first double-digit lead of the night, 22-12, on a short jumper by Jordin Canada. At the end of the first, the Storm was up 17-26.

Washington didn’t shoot too much better but was slightly more aggressive on offense and trailed 38-30 at intermission.

Meesseman, the Mystics’ go-to offensive player for the night, led all scorers with 11 points at the half.

Seattle quickly regained a double-digit lead, beginning the third period on a 10-2 run primarily due to the playmaking of Howard and Sue Bird, who returned from a four-game break due to knee injury. The veteran contributed with nine points and two assists for the night.

The Mystics struggled on offense in the third and were beat on the boards 11-5 as they trailed 57-44 entering the fourth.

Sug Sutton drained a 3-pointer, Kiara Leslie sliced through the defense for a driving layup, and Tianna Hawkins made a 3-pointer to give Washington a strong start to the fourth quarter. About three minutes in, the Mystics only trailed 59-52.

After a few more buckets by Ariel Atkins, Meesseman and Hawkins, the Mystics cut their deficit to 67-62 with a minute left in regulation.

Myisha Hines-Allen rebounded a missed shot by Stewart, then Atkins missed a 3-pointer that would have made it a one-possession game with just under 40 seconds left.

Washington was forced to foul as time got away from them, as Stewart and Bird knocked down the necessary free throws to seal the game for Seattle.

Hines-Allen grabbed a team-high six rebounds but was held to a season-low two points on 1-of-8 shooting. Meesseman scored a game-high 17 while Gemelos and Tianna Hawkins added 10 points apiece..

Washington, currently ranked 10th in the league standings, hopes to make a playoff push for the final six games of the regular season, beginning with a matchup against the Chicago Sky on Friday at 7 p.m.