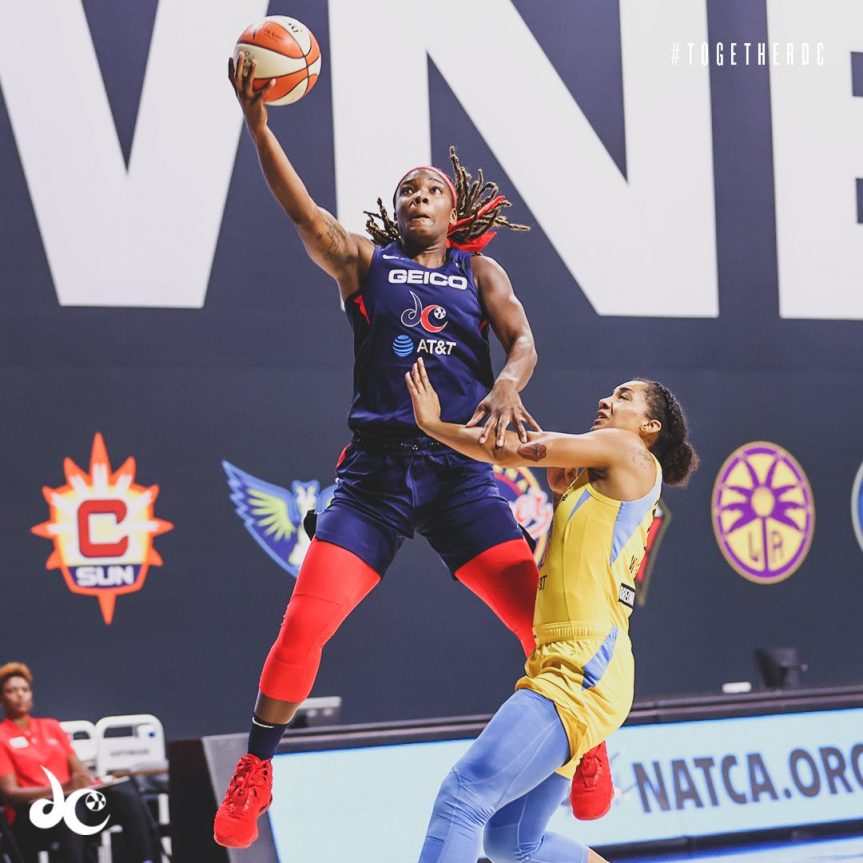 Myisha Hines-Allen recorded another double-double, registering 19 points and 10 boards, while Emma Meesseman poured in 15 points and five assists in one of the Mystics’ best offensive performances of the season.

Washington got off to a blistering start, putting up 32 points in the first quarter. They shot better than 63% from the field and exhibited coherent ball movement with 11 assists in the quarter.

Paced by Hines-Allen and Mitchell – who tallied eight of her 12 assists in the first quarter – the Mystics also didn’t commit a turnover until early in the second quarter.

“We played both ends of the floor. Offensively, we did really good early, and then their [Chicago’s] defense picked up, but when we most needed to, our defense picked up in the second half,” coach Mike Thibault said after the win.

“I thought Leilani was sensational. [She] played the whole second half and didn’t want to come out. She just wanted to get us a win badly.”

Trailing by 11 after the first, Cheyenne Parker and Courtney Vandersloot picked up the tempo leading up to halftime and helped Chicago open the second on a 10-2 scoring run to close the gap to three, 34-31, with 3:30 left until the break.

After Meesseman made a jumper from five feet out, Vandersloot converted on a 3-pointer that made the score, 36-34. The Sky crept back into the game, but the Mystics managed to maintain the lead for just about the entire night.

Layins by Mitchell and Hines-Allen in the final minute of the first half helped Washington extend its lead to 45-40 at intermission. The Mystics held a 17-16 rebounding advantage despite being outscored 19-13 in the second period. Parker scored 11 points and Vandersloot had nine for the Sky in the first half.

Kiara Leslie’s short jumper, Meesseman’s triple and Hines-Allen’s mid-range shot put the Mystics back on top by double digits, 52-42, three minutes into the second half. Allie Quigley then responded with a jumper from deep that began another rally for the Sky.

But once again, Chicago was only able to get to within two due to Washington’s sturdy defensive effort, who led 61-54 after three. The Mystics totaled 31 rebounds for the evening to the Sky’s 29.

Mitchell played a crucial role in helping Washington maintain its lead throughout the fourth, putting up eight points on 2-of-3 shooting from beyond the arc. With the win, Washington improves to 5-12 and snaps a five-game losing streak. Ariel Atkins chipped in with 13 points.

“I think from the start in the first quarter we really pushed the tempo. We went back to playing how we were early in the season,” Mitchell said.

Conversely, the Sky move to 11-8 with the loss and are still in good standing for the playoff race with a No. 6 seed in the league standings. Parker netted 17 points and five rebounds, Vandersloot registered 16 points and 11 assists, and Quigley scored 12.

Washington will continue its final stretch in pursuit of a playoff spot against the Dallas Wings on today at 4 p.m.