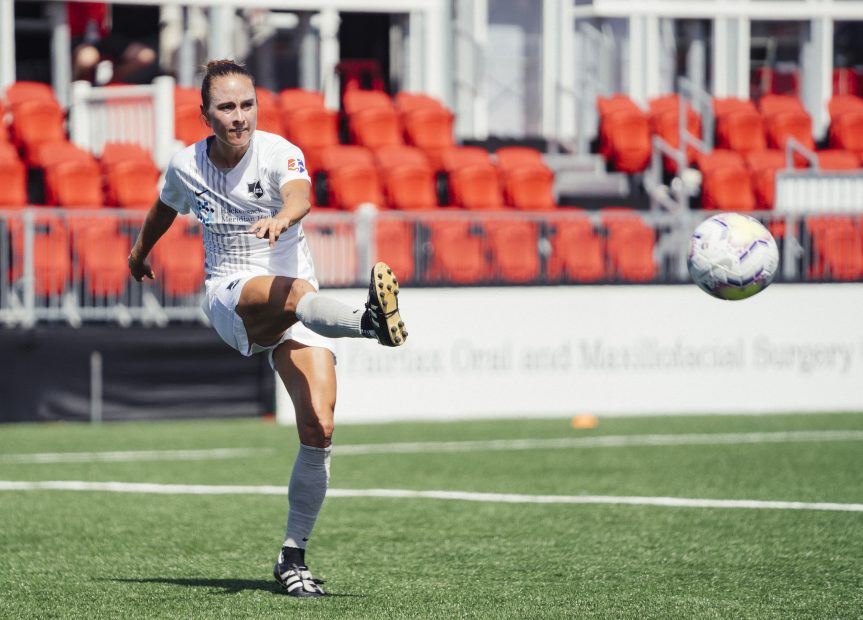 LEESBURG – In the opening match of the NWSL’s Fall Series, the Washington Spirit was poised to earn a critical draw after Paige Nielsen converted a penalty kick in the 89th minute.

However, in her first competitive match since playing for the Spirit last season, midfielder Mallory Pugh funneled in a slicing pass between the defense to find teammate Margaret Purce. The Silver Spring, Maryland native took two touches before firing a shot past Aubrey Bledsoe to lead Sky Blue FC to a 2-1 win Saturday.

It is the second time this year that the Spirit lost to their New Jersey counterparts. During the summer’s Challenge Cup tournament, Sky Blue eliminated Washington in the knockout round via a penalty kick shootout.

While both teams came into the opener with various changes to their rosters and limited training time, head coach Richie Burke said the Spirit is “miles off” from their best performance.

“Asking everyone to be where they need to be on who we want to play is tough,” Burke said. “…I think we are a way off, and it shows in the work today.”

Sky Blue tested Bledsoe early and often in the opening minutes. In the seventh minute, Purce dribbled past defender Natalie Jacobs down the right sideline and into the penalty area, creating a one-on-one opportunity in front of the goal net.

The Sky Blue attacker launched a right-footed shot toward goal, but Bledsoe made the one-armed save.

Sky Blue finally broke through in the 18th minute when striker Ifeoma Onumonu stole the ball from Jacobs in the Spirit’s half and fired a near-post shot over Bledsoe.

While Washington finished the first half with a flurry of chances, none were close to creating danger towards the opposing defense.

“We don’t concede easily,” Bledsoe said. “It is definitely in attack where we need to get better and connecting in the final third. In the Challenge Cup, we did not score near enough goals, and today, aside from the one on the penalty kick, we have to do more with our opportunities.”

Burke made two substitutions after halftime due to injury concerns, taking out midfielder Ashley Sanchez (blood blister) and Hendricks (cramps).

With several players making their debuts already on the field, Burke said he propelled midfielder Bayley Feist forward with the strikers to create more space for passing and become an additional attacker.

The Spirit had multiple goal-scoring chances but could not convert. In the 89th minute, Jessie Scarpa collected a loose shot in the Sky Blue penalty area before being tackled by defender Erika Skroski, forcing referee Danielle Chesky to call for a penalty kick.

Nielsen buried the attempt, saying she was preparing for their next offensive possession to score again.

However, it would be Pugh, who played her first three seasons with Washington, who was the real offensive threat. The Littleton, Colorado native almost scored on a breakaway opportunity moments after Nielsen’s penalty kick, but the shot instead hit the post.

She bounced back seconds later to provide the game-winning assist to Purce to give Sky Blue the win.

“We have to get better with game management,” Bledsoe said. “To give them two breakaways in stoppage time is unacceptable and [it was] a lapse in organization. We have to do better there.”

The game also served as Washington’s first match in Segra Field in Virginia, which is also the home venue for USL side Loudoun United FC.

Though he prefers playing in the grass fields in the Maryland SoccerPlex or D.C.’s Audi Field, Burke said his players would have to adjust to the turf and learn from their mistakes as they prepare for Chicago Red Stars on Sept. 12.

“We have moments of brilliance,” Nielsen said. “We have a lot of good players on our team, and sometimes, we play very well connected, and we see our potential, but there are moments where we break down, and we still have a lot to learn.”