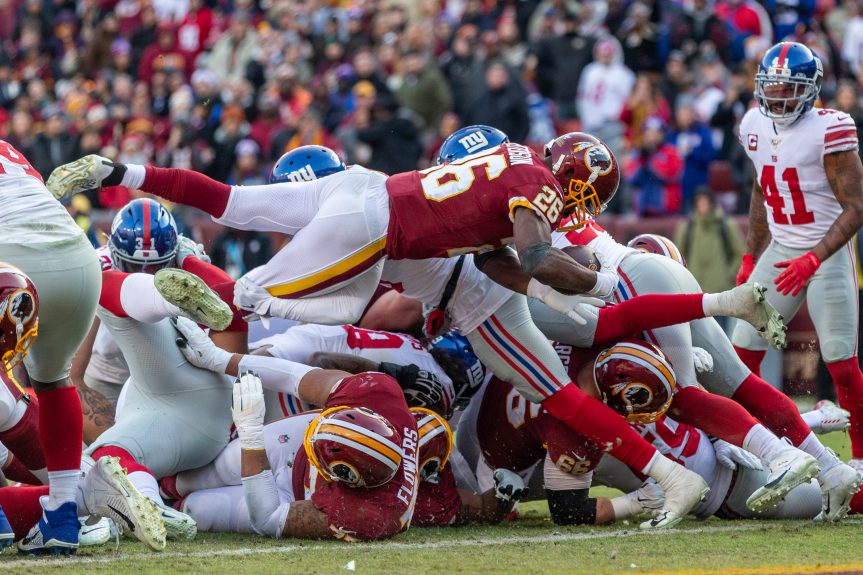 Veteran running back signs with Detroit Lions shortly after being cut

WASHINGTON — In perhaps one of the most attention-grabbing roster moves this NFL offseason, the Washington Football Team has released veteran running back Adrian Peterson.

In a tweet that took many by surprise, the organization announced on Sept. 4, “We have released RB Adrian Peterson.”

In a press conference shortly after Peterson’s release, Washington Football Head Coach Ron Rivera characterized the 35-year-old as a “first-ballot hall of famer” and explained the team’s decision.

“We went through a lot of conversations in the last day and late yesterday (Sept. 3), and really came to the conclusion that this was the direction we were going to head,” Rivera said when speaking to the media on Sept. 4.

“This is not about what he (Peterson) hasn’t done or anything like that, but it’s about what this group of backs has shown us, especially in the way the offense is headed, and that is what this is all about.”

“Adrian is a true pro. I was fortunate just to be with him this summer, watching the way he handled himself and handled the other players around him really epitomizes who he is as a football player.”

Rivera said he explained the team’s decision with Peterson, who took the news with a good deal of composure and humility. The 13-year player expressed gratitude and wished the team the best of luck, Rivera said.

“He was as cool and professional as you should be, and that kind of epitomizes who he is as a person, his character, you know the quality guy he is. Like I said, it’s tough because I know this guy is a first-ballot hall of famer,” Rivera continued.

“Anytime you have to move from a person of AP’s status, it’s tough.”

Just before the start of the 2018 season, Peterson signed a one-year deal with Washington. He was then re-signed by the franchise in 2019 on a two-year deal worth $8 million.

In a productive stint in Washington, Peterson recorded 1,940 rushing yards on 462 carries in his two seasons. He scored 12 touchdowns in 31 game appearances.

A 2007 AP Offensive Rookie of the Year and 2012 MVP, Peterson has played on four teams as he enters his 14th year in the league. The 6-foot-2, seven-time Pro Bowler, left a lasting impact on the younger players surrounding him in Washington.

“Growing up, I was a huge AP fan. Having the opportunity to be his teammate and learn from him has been an experience I’ll never forget,” said Washington quarterback Dwayne Haskins Jr. in a tweet. ”Thank you for always having my back, big bro! I’m going to make you proud, best of luck! #AllDay”

Similarly, running back Antonio Gibson paid homage to Peterson after learning he was released.

“Just wanted to say Thank You for all that you poured into me,” tweeted Gibson. “Growing up watching to being beside you at practice, taking advice is still mind-blowing… Forever my G.O.A.T.”

After the release of Peterson and Derrius Guice following an arrest related to domestic abuse charges, Washington will enter the 2020 season with four running backs listed on its final roster: Antonio Gibson, Peyton Barber, Bryce Love and J.D. McKissic.

While he might have been shocked by Washington’s decision, Peterson was allowed to continue his pursuit of playing the sport he loves.

Only 48 hours after Washington released Peterson, he has agreed to a one-year contract with the Detroit Lions, worth $1.05 million and a possible $1.25 million in incentives, reports say.

According to NFL insider Josina Anderson, Peterson said: “They’re giving me an opportunity to play. I know coach (Darell) Bevell from my days in Minnesota. Ultimately I feel comfortable going there and helping them to get better.”

Earlier in the offseason, Davis originally signed with Washington on a one-year contract that was worth up to $5 million and included a $2 million signing bonus.

Now, the Washington, D.C. native and University of Maryland product will return to the team from whence he came: the Pittsburgh Steelers.

According to ESPN’s Adam Schefter, the 2016 second-round draft pick re-signed with Pittsburgh, the team he spent his first four seasons with.

The 26-year-old totaled 247 tackles, 2.5 sacks, and five interceptions in his first stint with the Steelers and hopes to make an immediate impact after returning from a shoulder injury suffered early in the 2019 season.