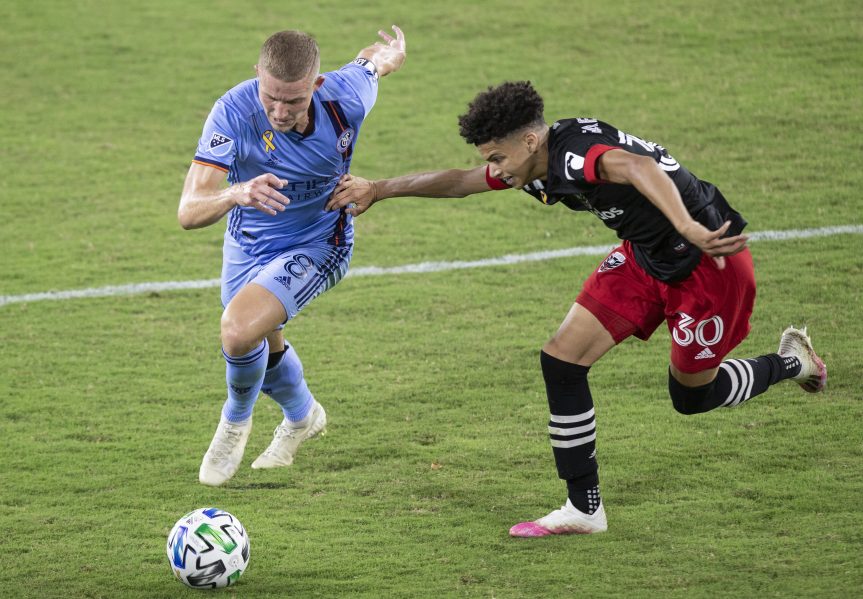 WASHINGTON – D.C. United did not register a shot for more than 90 minutes, but its defensive efforts stopped New York City FC’s attack to earn a scoreless draw Sunday night.

Playing without goalkeeper Bill Hamid and defender Steve Birnbaum for the third-straight match and missing several players with season-ending injuries, United earned another critical result in their pursuit for a playoff spot. United entered the game with positive vibes after their stunning 2-1 road win over the New York Red Bulls on Wednesday.

United surrendered most of the possession, with New York City holding the ball for 70% of the game and attempted 19 total shots. When asked about the lack of offensive production, head coach Ben Olsen defended the effect, explaining that despite the team’s fatigue for playing their third match in nine days, in the end, “we got a point of out of it.”

“We came with the mindset of being hard to break down,” United goalkeeper Chris Seitz, who earned his second consecutive shutout, said.

“Our first goal tonight was to get a clean sheet and maybe catch them on a counter if possible. We wanted to defend well and defend strong and be brave in there, and I think our group put in a heck of a performance.”

However, New York City limited United’s offensive opportunities as they remained patient with the ball before attacking. Early in the first half, Ronald Matarrita received a pass behind the D.C. defense and sent a crossing pass to Keaton Parks. However, his shot flew over the left goalpost.

Moments later, a cutting pass between the two United players found Héber alone in front of the goal net. The Brazilian fired a low shot, but Seitz blocked it with a kick save. United’s most dangerous opportunity came as Julian Gressel hit the ball over the far crossbar, but it did not count as a shot.

Moments before halftime, a video review went in United’s favor on a questionable handball in the box on Frédéric Brillant, whose hand inadvertently stopped an attempted cross into the penalty area.

Referee Ted Unkel chose not to review the play, and no penalty kick was awarded.

Seitz kept the game leveled after consecutive shots at the start of the second half, including a foot save on another attempt by Héber. United continued to forgo possession to New York and fortified its defense when defenders Oniel Fisher and Chris Odoi-Atsem entered the game.

Meanwhile, United’s attack continued to lack in creating goalscoring chances. By the 80th minute, the home team did not have an attempt registered while New York City had 16. The inclusions of midfielder Federico Higuaín and the debuting Gelmin Rivas did not generate additional attacks on goal but provided threatening moments in stoppage time.

“Good defenders relish putting up zeros, and good teams appreciate it as well,” Olsen said. “The offense can get better; I will not argue that, but until that happens, defensively, we [remain] pretty good.”

United will host the New York Red Bulls Saturday with their second slate of matches starting at the end of September. With more players returning from injuries in the upcoming future, United will continue to focus on the defensive side first and earn to make results to “live to fight for another day.”

“Nothing is very easy right now with this team; nothing is smooth or going to the right way,” Brillant said. “But it is also good to get the basic things, and now, we are at that stage, and we did very well. Now, we have to build on top of those basic things.”