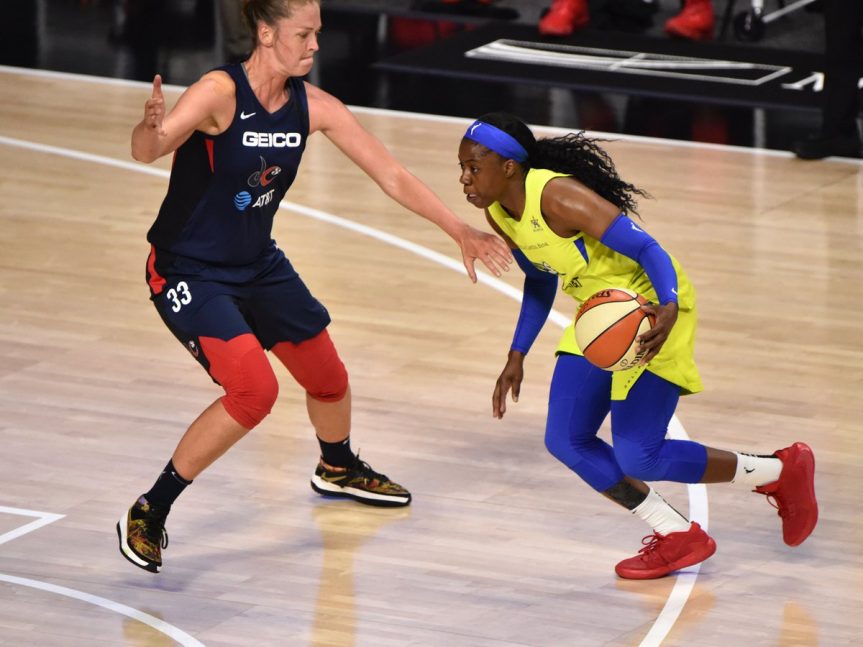 WASHINGTON – In their second meeting this season, the Dallas Wings got the best of the Washington Mystics similarly as the time before.

After Emma Meesseman made a free throw that gave Washington an 86-83 lead with 6.8 seconds left in regulation, Ogunbowale dribbled the distance of the floor and drained a 3-pointer to tie the game with 0.7 seconds remaining, forcing overtime.

Washington began the extra period with an Ariel Atkins layup and a pair of Leilani Mitchell free throws for a 90-86 lead. Ogunbowale, riding on momentum from the end of regulation, answered with another 3-pointer and a long 2-point shot, giving Dallas a one-point advantage.

Marina Mabrey’s finger roll and Ogunbowale’s two free throws capped off a 9-2 run that Dallas used en route to the win. Atkins fed Meesseman for a mid-range jumper that reduced Washington’s deficit to 95-94 with 1:22 left in overtime just before Ogunbowale drove in for a layup to score her 39th point, a career-high for the second-year player from Notre Dame.

This time, head coach Mike Thibault said his team tried everything to slow Ogunbowale down and credited Atkins for playing good defense on her.

“We tried everything. We double-teamed (Ogunbowale) some, she beat some of our switches, she made great shots, and she got a lot of free throws,” Thibault said. “It’s a tough situation. We tried a couple of times to get it out of her hands, but she’s a stubborn good player in the sense that she knows how to keep it, and she knows how to get her shot off.”

Washington shot better than 50 percent from the field and was 12 of 14 from the free-throw line while Dallas went 25 of 28. The Mystics committed 14 turnovers to Dallas’ 10 but won the rebounding duel 30-26.

In overtime, Washington was 3 of 9 shooting while Dallas went 4 of 4 from the field and 6 of 6 from the free-throw line.

Ogunbowale and Katie Lou Samuelson combined for 13 first-quarter points as Dallas led 19-17 going into the second. The Mystics came back for a dominant second quarter, sparked by 12 points from Atkins that put them ahead 44-38 at halftime. Ogunbowale made four of her five shot attempts in the third quarter for 11 points to bring her team to within one point entering the final period.

Washington was able to work its lead back up to seven and was in control for most of the fourth quarter until Ogunbowale led the comeback rally, beginning around the four-minute mark.

The final week of the regular season will include four games in five days for Washington. It starts with a matchup against the Minnesota Lynx on Tuesday at 8 p.m. on ESPN2.