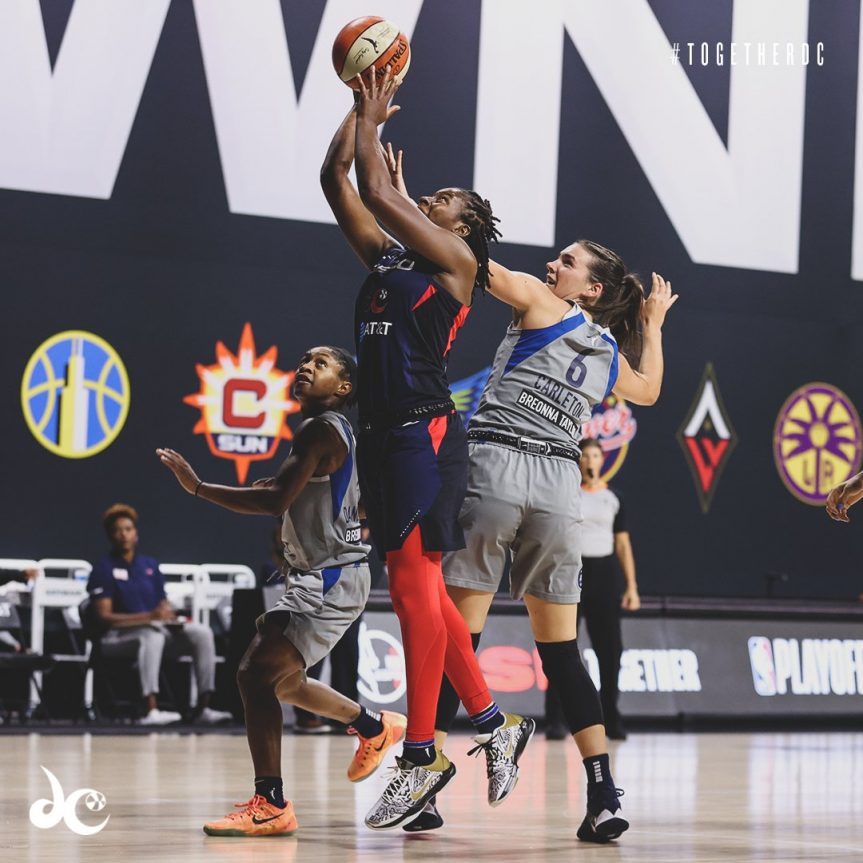 WASHINGTON — Myisha Hines-Allen netted a game-high 26 points along with nine rebounds and seven assists while Emma Meesseman and Ariel Atkins contributed with 18 points apiece to lead the Washington Mystics to a narrow 89-86 win over the Minnesota Lynx on Tuesday night.

Additionally, forward Tianna Hawkins came off the bench and scored 14 points, including four pivotal free throws in the last 10 seconds to help Washington hold on for the big win. When the Mystics last squared off against the Lynx, they played their worst game this season as the team scored a season-low 48 points and lost by 20.

“Obviously, given the circumstances of a few days ago, that’s a really gut-check win for us,” Washington Mystics head coach Mike Thibault said. “We had 20-plus assists, we got a lot of people involved in the offense, and we got stops at the end when we needed it.”

Hines-Allen began with a short jumper and two easy layins that helped Washington sprint out to an 11-2 lead within the contest’s first four minutes.

The 6-foot-2 forward, who is making a case for the league’s Most Improved Player award, scored 13 early points to give her team a 24-20 lead at the end of the first.

Meesseman led the charge on offense as the second period began, but Minnesota’s Crystal Dangerfield and Damiris Dantas were in constant attack mode and led an 8-2 run to tie the game at 30 about halfway through the quarter.

The offensive trio of Hines-Allen, Atkins, and Meesseman kept Washington ahead as the half approached. Still, Napheesa Collier and Odyssey Sims came alive on the other end to help the Lynx stay within striking distance. At the break, the Mystics led 48-41.

Collier had 11 points and Sims scored nine at halftime as Hines-Allen put up 19 points, and Meesseman had 13. The Mystics had done an exceptional job at moving the ball with 14 assists (22 for the game) and were edging the Lynx on the boards, 13-11.

Thanks to Dangerfield’s 10 points in the third, along with Collier’s six points and five rebounds, the Lynx were able to string together a 29-19 scoring run in the quarter.

As the third quarter progressed, Minnesota chipped away little by little, finally tying the game again at 67-67 on a 16-foot pull-up jumper by Dangerfield with 30 seconds left.

After a Washington turnover and a Hawkins foul, Erica McCall hit three free throws that put Minnesota ahead, 70-67, entering the fourth.

After falling to a 10-point turnaround, the Mystics didn’t allow the Lynx’s momentum to continue into the 10 minutes of the night. Hines-Allen checked back into the game and had five quick points and a pair of layups from Hawkins, opening the fourth on a 10-2 run.

The Mystics were up 77-72 halfway through the fourth. They allowed five more field goals on the defensive end but didn’t trail for the rest of the evening.

Down 85-80 with less than two minutes on the game clock, Collier drove in for a floater, and Bridget Carleton layed the ball in as the Lynx then trailed 85-84 with 9.4 seconds left. When the Mystics inbounded the pass, Minnesota was forced to foul, and Hawkins calmly hit both free throws on the other end.

Dangerfield’s layup made it 87-86 and only 0.9 seconds remained. Hawkins was quickly fouled again, and went 2-of-2 from the free-throw line also as Washington escaped with the crucial victory and improved to 6-13 on the season.

Collier scored a team-high 21 and collected 11 boards while Dangerfield finished with 20 points and seven assists for the Lynx (13-7). Sims scored 17 points, and Dantas poured in 14. Leilani Mitchell dished out 10 assists for the Mystics.

The defending champs are currently ninth in league standings, only one game behind the Dallas Wings. Depending on how the final three games of the regular season pan out, Washington could move up to eighth place, sealing a spot in the playoffs.

The playoff push continues when the Mystics face the Los Angeles Sparks tonight at 10 p.m.