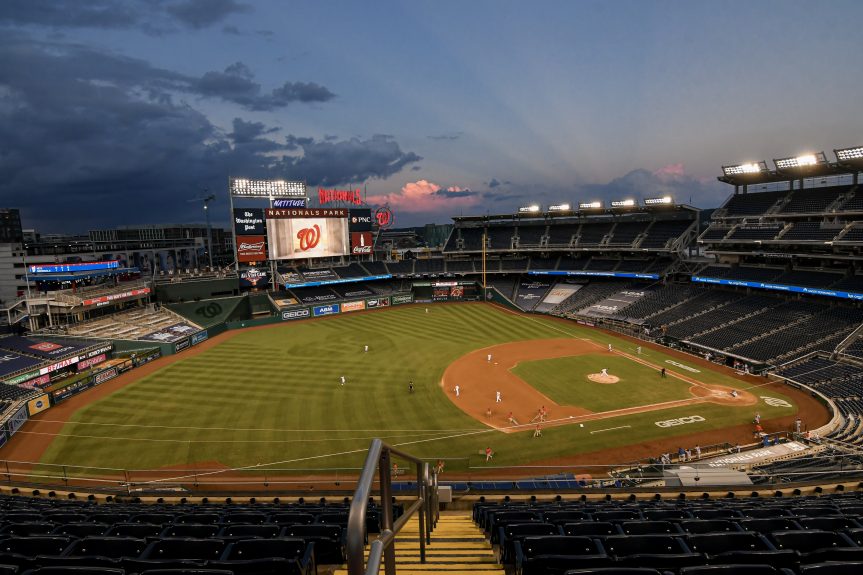 WASHINGTON – Coming off a week where the Washington Nationals won one of seven games, they faced a challenging week. They took on the first-place Atlanta Braves of the National League East in a four-game series, followed by two games with the first-place Tampa Bay Rays of the American League East.

Despite a rigorous schedule, the Nationals surpassed expectations, ending the week with a 4-2 record.

Continuing their 10-day road trip, the Nationals began their four-game series against Atlanta with a doubleheader.

The Braves jumped to an early first-inning lead and followed with a pair of runs in the third, fourth and sixth innings.

Right-hander Austin Voth took the loss, moving his record to 0-5 after allowing five runs in 4 2/3 innings.

“It’s definitely not what I want, but today I just wanted to go out there and throw out mechanics and just compete,” Voth said. “And I felt like I did that.”

The Nationals’ only run came in the fourth inning on a sacrifice fly by Yan Gomes to drive in Asdrúbal Cabrera.

Attempting to prevent an eight-game losing streak, the Nationals returned to the field on Friday night for the twilight game of the doubleheader.

Despite jumping to an early lead, the Nationals could not pull away from the Braves throughout the game. Washington scored in the first off a sacrifice fly by Cabrera, but Atlanta answered in the bottom of the inning.

Brock Holt drove in another run for Washington in the second inning before Atlanta countered with a pair of home runs. Even after the Nationals scored five runs in the third inning, the Braves responded with four runs of their own in the fourth.

Washington finally pulled away at the top of the seventh when Michael A. Taylor connected on a bunt to third, driving in their 10th run.

“They don’t quit,” manager Dave Martinez said. “We could be down, and they just find a way to stay in the game.”

Wander Suero picked up the win, and Taylor led the offense with three RBIs. Trea Turner hit the lone Nationals home run with a solo shot in the sixth inning.

Washington looked to continue their offensive momentum and did so early, with a pair of RBIs from Kurt Suzuki and Carter Kieboom. The Braves answered with three home runs over the next four innings before the Nationals reclaimed the lead in the subsequent innings with contributions throughout the lineup.

They tacked on five runs of insurance in the ninth inning led by Holt, who finished with a team-leading four hits.

Despite a short outing by starter Erick Fedde, the bullpen shut down the Braves lineup with 5 1/3 scoreless innings. Kyle McGowin picked up his first career win after 2 1/3 innings of work out of the bullpen.

“McGowin came in, threw strikes, pounded the strike zone and he got big outs for us,” Martinez said. “We needed that”

Closing out the series in Atlanta, Washington entered Sunday looking to win their first series since mid-August. With all-star pitcher Patrick Corbin take the hill, the Nationals provided early run support with an RBI single by Eric Thames in the second inning.

The early lead would be shortlived as the Braves scored 10 unanswered runs between the fourth and seventh innings. Recording just two hits between the third and eighth innings, the Nationals answered late with two runs in the ninth innings, but their late rally fell short of a comeback. Holt led the Nationals in hits for the second straight game, with three of his own.

Corbin picked up the loss, allowing five runs over 5 1/3 innings.

“I thought I made some good pitches and gave up some hits on that as well,” Corbin said. “I thought my stuff was better today.”

Attempting to bounce back after a loss to close the four-game series in Atlanta, the Nationals returned home for a two-game set against the Tampa Bay Rays. With Max Scherzer on the mound, the Nationals lineup gave their ace the offensive output he needed.

They drew first blood with an RBI by Kieboom in the second inning and continued the scoring output with RBI hits by Turner, Suzuki, Taylor and Josh Harrison.

“That’s the Max we know. He really pitched well,” said Martinez. “We needed those seven innings.”

Closing out their brief interleague series against the Rays, the Nationals scored early with a first-inning RBI by Juan Soto. Kieboom doubled in the second inning while Washington added two more runs in the third with contributions from Cabrera and Harrison.

The early offense helped propel Anibal Sanchez to his second win of the year. He held the Rays lineup scoreless through the first five innings before running into trouble in the sixth when he surrendered three runs. The bullpen kept the Nationals lead intact with four shutout innings.

Winning four of the last five games, the Nationals have relied on contributions throughout the lineup, hitting just one home run during that stretch.

“We’re trying to be creative in scoring runs with bunting, hit and running and stealing bases,” said Martinez. “It’s amazing what happens when our starting pitchers come in and five or six innings.”

Still sitting at the bottom of the NL East standings with a 16-25 record and eight games behind the first-place Braves, the Nationals will experience a nearly identical schedule from the previous week.

They will take on Atlanta in a four-game set at home before traveling to Tampa Bay for a two-game series. The Braves still sit atop the NL East and are coming off a game where they scored 29 runs against the Miami Marlins.