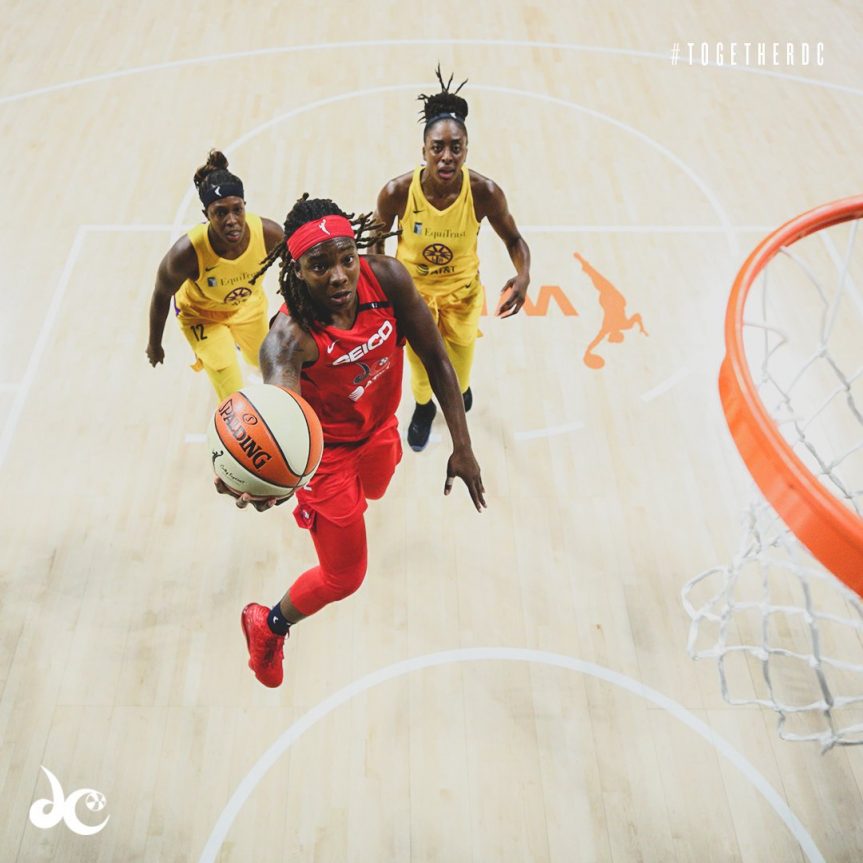 WASHINGTON — As the regular season winds down, Myisha Hines-Allen has shown how badly she wants to put the Washington Mystics in position to seal a playoff spot.

The forward scored a game-high 30 points and collected eight rebounds and four assists to lead Washington in the comeback win, 80-72, over the Los Angeles Sparks on Thursday night.

The heroic performance marks Hines-Allen’s second 30-point game this season and comes two days after leading Washington to a gutsy win over Minnesota with 26 points.

“I think it just starts with us never giving up, never settling for just losing. When we were on that seven-game losing streak…we could’ve all folded,” Hines-Allen said of her team’s resilience after the win.

“At the end of the day, we were like, ‘no, we’re not going to make excuses, we’re going to get better every time we step foot on that court,’ and I definitely think that’s Mystics basketball – never settling for anything less than being great.”

The Sparks got on the scoreboard first with Nneka Ogwumike sinking two free throws.

Then, Leilani Mitchell sank two free throws on the other end after getting fouled by Te’a Cooper. From that point, it was a relatively close first quarter with Los Angeles pulling away toward the end and had a commanding 20-15 lead primarily due to eight early points from Chelsea Gray.

The second quarter was even tighter than the first. Both teams shot 10-of-17 from the field and 50% from deep. Hines-Allen led the way with 13 points in the quarter to help the Mystics close the gap.

Alaina Coats slashed in for a layin, Kiara Leslie buried a 3-pointer, and Hines-Allen made a close jumper that tied it, 22-22, with about 7:30 left in the second. Brittney Sykes dropped in a layup for LA, then Jacki Gemelos responded with a deep triple that gave Washington a 25-24 lead and completed a 10-4 start to the quarter.

In total, there were five ties and four lead changes in the quarter. Taking on a top-three team in the Sparks, the Mystics knew they had to match their energy on both ends of the floor to have a chance.

Nonetheless, the Sparks edged past the Mystics 25-24 in the second to take a 45-39 lead at the half. By then, Hines-Allen already had 17 points and Gray had 11 for Los Angeles.

The third quarter saw the most significant momentum shift as Washington made 10-of-18 attempts, totaled seven assists, and capitalized off the Sparks’ eight turnovers to outscore them 23-12. Emma Meesseman got going offensively and scored eight of her 14 points in the third.

Sykes opened the third quarter with an easy layup to put Los Angeles up eight points, but Washington answered with a 16-6 scoring run and was up 55-53 at the four-minute mark and never trailed again from that point. Approaching the final quarter, Washington led 62-57.

The Mystics stayed in control late in the game though the Sparks were able to tie it and came close to regaining the lead. Running the offense through Hines-Allen was a staple for Washington, particularly toward the end.

Candace Parker forced a 68-68 tie on a layup with 3:46 remaining, and then an Ariel Atkins 3-pointer made it 71-68, Mystics. In the final 90 seconds, Hines-Allen made two 3s, a free throw, and fed Meesseman for a layin that drove Washington to the much-needed win.

The Mystics improve to 7-13 with the win as LA drops to 15-6. Mitchell recorded 10 points, nine assists and five rebounds for the Mystics. Gray finished with 21 points and seven boards, Ogwumike added 15 points and six rebounds, and Sykes poured in 11 points.

According to the latest league standings, the Mystics sit in ninth place, and Dallas Wings are in eighth. Though the two clubs have identical overall records, Dallas is ranked higher by virtue of defeating Washington twice.

The Mystics will begin back-to-back games against the New York Liberty on Saturday at noon. On Sunday, they will face the Atlanta Dream to conclude the regular season.