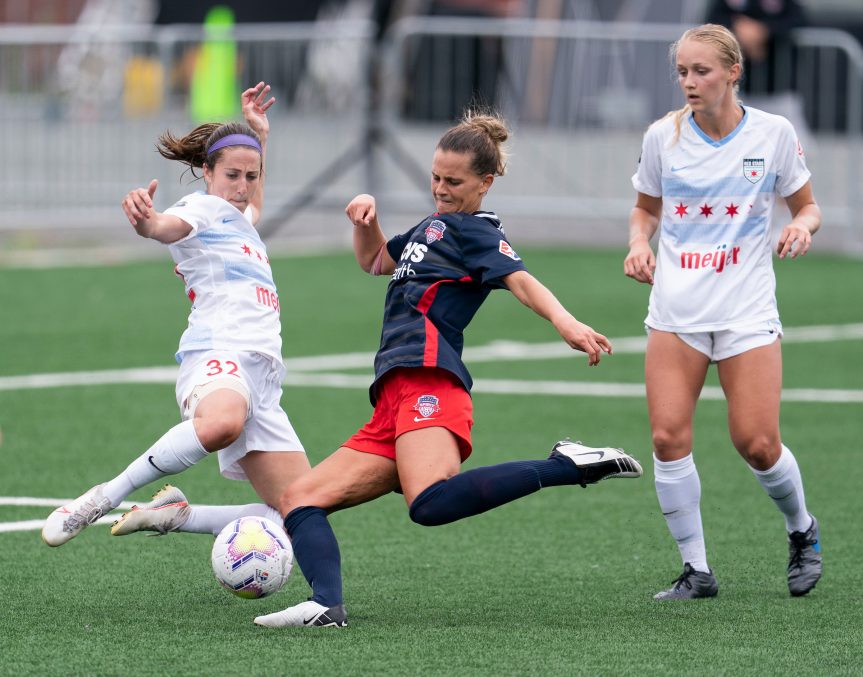 LEESBURG – The Washington Spirit spend over 50 minutes with a player advantage against the Chicago Red Stars in Segra Field on Saturday afternoon. Despite the edge, the game was tied heading into the second minute of stoppage time.

Washington substitute Crystal Thomas danced with the ball on the edge of the penalty area, attempting to confuse the Chicago defense. Once she broke free, Thomas slid away and sent a low cross away from goalkeeper Alyssa Naeher and finds the feet of Jessie Scarpa.

The former University of North Carolina star stuck her foot out to redirect the ball into the net for her first professional goal.

“I think just having [first goal] under my belt is a good place to start in terms of confidence and assuring myself that I can play at this level to contribute and help the team,” Scarpa said.

Scarpa’s 92nd-minute goal broke the deadlock in the competitive affair as the Spirit emerge victorious with a 2-1 win in their final home match in the NWSL’s Fall Series.

The late goal helped Washington (1-1-0, 3 points) avenge last week’s loss against Sky Blue FC while earning their first points in the regional pod rounds. Scarpa, who joined the club in December, has been unable to have consistent playing time all season, Spirit head coach Richie Burke said, due to injury problems.

However, Burke said drawing a penalty last week and scoring during her 11-minute appearance on Saturday is a sample of her capabilities when she is on the field.

“She’s great coming off the bench,” Burke said. “Jess is a good football player with great IQ and knows when and where to go…to get two games in a row where she has come on and created a spark from the bench is great. It is great for her confidence, great for her belief at playing at this level, and it’s certainly good for our football club.”

Washington struggled early to contain Chicago (0-1-0, 0 points) and their wing attack as strikers Kealia Watt and Savannah McCaskill used their speed and to cut inside the penalty area. In the 26th minute, Watt controlled the ball unmarked on the left wing and sent a low cross for Sarah Luebbert to tap for the Red Stars’ lone goal.

“We haven’t had much time, but we have really worked on our forward movement,” Watt said. “I think for the first bit of that game, we were really happy with it. Even on the goal, that’s something we have been practicing for weeks.”

McCaskill was ejected in the 41st minute after earning her a second yellow card following a late tackle on Dorian Bailey. The Spirit would have a player advantage for the whole second half.

Washington had multiple opportunities to find the net after halftime, including Meggie Dougherty Howard firing a long-range shot blocked by Naeher.

It would take 71 minute before the Spirit finally scored as Bayley Feist fired a left-footed shot through a wall of Chicago defenders to tie the game.

The Spirit continued its offensive assault for rest of the half, but Watt almost capitlized for the Red Stars. After a missed opportunity on a corner kick, Watt started a counterattack and hit a floating shot over goalkeeper Aubrey Bledsoe.

While her shot beat the goalkeeper, the ball smacked off the crossbar. Dani Rhodes attempted to follow up on the rebound, but Bledsoe made a diving save, keeping the game tied until Scarpa’s game-winner.

“That save was the most significant moment of the game,” Burke said of Bledsoe, whom he believes should be called up to the U.S. National Team. “There’s not many goalkeepers that make that save. To say that is a world-class save is an understatement. It was just a superb save.”

The Spirit will take the next week off before traveling to face Chicago on Sept. 26. They will close out regional pod play in New Jersey against Sky Blue FC on Oct. 3.