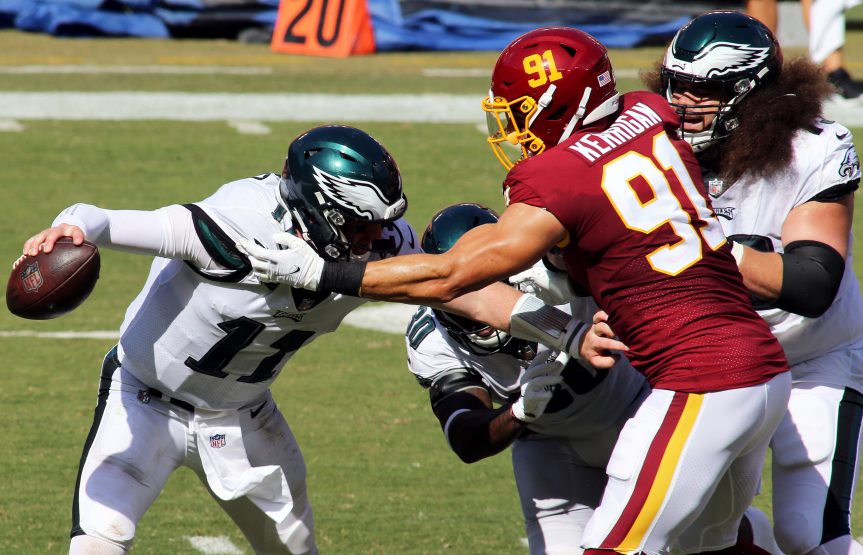 On Sunday, Sept. 13, the Washington Football Team hosted the NFC East rival Philadelphia Eagles in Washington’s season opener played with no one in attendance due to the ongoing COVID-19 pandemic.

Down 17-0, it seemed like we had seen the same Washington team in previous years. Still, stellar defense and a no-huddle offense managed 27 unanswered points to pull off a remarkable 27-17 comeback victory over Philadelphia.

“We showed that we can compete with the NFC East’s best team,” said Rivera. “We played well against them. We’re fortunate to come out on top. They’re a very well-coached team, they’ve got tremendous football players, and we know that.”

On the Eagles’ first drive of the game, quarterback Carson Wentz fired darts to his two tight ends Zach Ertz and Dallas Goedert, which resulted in Wentz finding Ertz in the end zone from five yards out for the early 7-0 lead.

After a field goal made by Jake Elliott, Wentz hooked up with Goedert for a 34-yard touchdown pass to put Philly ahead 17-0 with 6:54 left in the first half.

The Washington offense struggled at first, but after an interception by Fabian Moreau, the team eventually found their mojo as quarterback Dwayne Haskins led a five-play 45-yard drive that resulted in Haskins connecting with tight end Logan Thomas for the TD that cut the deficit to 17-7 at the half.

During halftime, Rivera received an IV for his cancer treatment, so Haskins led an uplifting speech that may have led to Washington’s comeback on Sunday.

“When playing quarterback, I’ve learned over the years in these opportunities in a game, or in the locker room, or before the game, to fire your guys up,” said Haskins.

Washington released running backs Derrius Guice and Adrian Peterson before the season began, so the team relied on rookie Antonio Gibson and veteran Peyton Barber; Barber scored two rushing touchdowns in the red zone. At the same time, kicker Dustin Hopkins made two field goals to cement the game once and for all.

Haskins looked solid for the most part, completing 17-of-31 passes for 178 yards and one score.

But all of these offensive plays wouldn’t have led to the victory if not for the impactful defense, especially the D-line composed of rookie Chase Young and veterans Ryan Kerrigan, Montez Sweat, Jonathan Allen, Da’Ron Payne, and Matt Ioannidis.

“This organization’s been around for a really long time,” said Kerrigan. “A lot of productive players come through, and to be at the top of that list now is pretty special to me.”

The turnover game was also strong with the Burgundy and Gold defense, with the team making two interceptions courtesy of Moreau and Jimmy Moreland, as well as one forced fumble, with Young knocking the ball out of Wentz’s hand and Kerrigan recovering.

This was also the first home opener win for the Washington franchise since the 2014 season.

The Washington Football Team begins the 2020 season 1-0 and will head to Arizona to face the Cardinals next Sunday at 4:05 p.m.